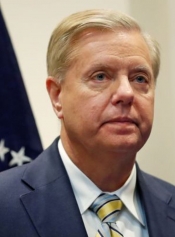 I write to you from Scotland in the United Kingdom to express some outsider sentiments, observations and support at this grave time in U.S. political history.

Before doing so, however, permit me first to congratulate you on your re-election to the Senate and to thank you for your generous financial contribution towards President Trump's legal campaign. If there is any consolation to be taken from unfolding events right now it is that honourable patriotic statesmen like you still exist in a political environment that all too often reeks of self interest and corruption.

While I likewise hold in high esteem a few of your noble Republican colleagues, such as Rep. Jim Jordan, I am disappointed by the silence of many others in the face of possibly the greatest high-level crime ever perpetrated against a sitting U.S. President and the American nation.

As for the "apologist" RINO element, already undermining the President's claim of electoral fraud in the media, people have lost closer friends when deloused than the Republicans have lost in these specimens. I will refrain from commenting further on them lest recounting their treachery in Scottish terms I launch into a litany of colourful metaphors that would denude this letter of any semblance of eloquence and decorum!

Every honest and objective viewer around the globe in possession of an IQ even marginally higher than a house plant has just watched one of America's greatest and most popular Presidents being defrauded of office, replaced with a decrepit 47-year establishment puppet whose mental faculties are as shot as his reputation would have been had the Democrats, the FBI and the media not conspired to suppress the utter corruption revealed on Hunter Biden's laptop.

If they think the world has been watching but not seeing then they should think again. Good people everywhere have witnessed this suppression while noting for weeks and months the uncanny pre-election confidence of the Democrats, confidence that could only have arisen from certain pre-knowledge of the outcome of this election.

Unless all Republicans now stand firm and united with President Trump in the fight to expose this massive fraud, a crime of enormous proportions that has unfolded before the eyes of a world audience, then I fear the America we have always known is lost forever, brought down to the level of a Banana Republic by a cabal of "deep state" operatives absent of all conscience and love of country.

It seems to me that by making Joe Biden the face of this electoral coup d'état, these people wanted more than just a rigged vote to oust Trump; they wanted the ousting to be as humiliating as possible, which is why they chose a man who can hardly string two coherent sentences together much less enunciate opposition policies to the electorate in the public forum.

Having thus selected this wretched individual they proceeded to hide him in a basement, shielding him from almost all public scrutiny apart from two forced TV debates and a few car park rallies, during which he promised all Americans a very bleak winter and an even darker future.

This is the hermit-like figure of doom, and quite possibly dementia, that the Democrats and the media would now have us believe has attracted American voters in the tens of millions to win the election fair and square. Well, permit me to suggest that if this were to prove true then "Uncle Joe" is Albert Einstein in comparison with more than half the U.S. electorate.

To borrow one of your American sayings, the entire business is a bunch of crap that a 5-year old could see through! This election was so rigged in advance that President Xi himself could have replaced Biden as Trump's opponent and won.

Speaking of which, President XI must be rubbing his hands with glee at this tragic turn of events in the U.S., for should this criminal enterprise succeed then the way is clear for Communist China to fulfil its ambition of becoming the leading world economic and ideological influencer, especially if suspicions are correct that Joe Biden is the "useful idiot", to quote Stalin, who is merely the key to the White House for cultural Marxist Kamala Harris.

Yes, I suspect that "Uncle Joe", now more white coat than White House material, will soon to be carted off to a sanatorium under Nancy Pelosi's proposed new legislation where he will spend his days recounting to fellow residents how he once ran against "George...er...Trump" for the Senate!

I do not think it an exaggeration to declare that an ideological war is raging in America right now, stirred by the intrigues of the CCP through its cultural Marxist friends within. Upon the outcome of this war depends the very survival of American democracy and the liberty of the free world.

Suffice it to say that while everyone expected Russian or Chinese cyber interference in the U.S. election, a far more deceptive plan to end the Trump Presidency was already well underway, under the radar.

To understand how they pulled it off we would have to explore the Chinese virus, the part played by the Marxist Secretary General of the World Health Organisation, two prominent left-leaning scientists, Ferguson and Fauci, a left-wing media and the "lockdown" Democrats for whom Covid-19 was key to securing the all-important unprecedented mail-in ballot system required to facilitate mass fraud.

Since space does not permit such an exploration or further elaboration I will content myself by saying that having researched all official sources on Covid-19 over many hundreds of hours, the geopolitical end game I have described is the only one that makes any sense.

Scores of eminent specialists in science and medicine, including Dr. Mike Yeadon, the former vice president and chief medical officer of Pfizer, have for months challenged the WHO/Ferguson/Fauci narrative on Covid-19, yet all have found themselves mysteriously subject to the same media censorship that was applied to the Hunter Biden laptop revelations. There can be only one reason for this and it is that Covid-19 is geopolitical smoke and mirrors.

British Office of National Statistics information on Covid-19 testifies to this fact, having downgraded the virus on March 19 to non-life threatening for 99.7% of the global population, a downgrading that remains valid and has since been vindicated by a low global mortality rate.

On that note I will bring this letter to a close with apologies for its length. I would be extremely grateful if you would inform the President of my support and daily prayers for him and his dear family. Please also be good enough to inform him that all patriotic Scots (not radical Nationalists like our ruling Scottish government) are proud of him not only because he's a great American President and a fighter, but also because he is a credit to his late Scottish mother and the land of her birth.

God bless America, God bless President Trump and his allies and God deliver us all from the iniquity presently unfolding.

[Comment Guidelines - Click to view]
The Remnant values the comments and input of our visitors. It’s no secret, however, that trolls exist, and trolls can do a lot of damage to a brand. Therefore, our comments are heavily monitored 24/7 by Remnant moderators around the country.  They have been instructed to remove demeaning, hostile, needlessly combative, racist, Christophobic comments, and streams not related to the storyline. Multiple comments from one person under a story are also discouraged. Capitalized sentences or comments will be removed (Internet shouting).
The Remnant comments sections are not designed for frequent personal blogging, on-going debates or theological or other disputes between commenters. Please understand that we pay our writers to defend The Remnant’s editorial positions. We thus acknowledge no moral obligation whatsoever to allow anyone and everyone to try to undermine our editorial policy and create a general nuisance on our website.  Therefore, Remnant moderators reserve the right to edit or remove comments, and comments do not necessarily represent the views of The Remnant.
back to top
Last modified on Tuesday, November 10, 2020
Tweet

More in this category: « ELECTION 2020: America’s Referendum on God WAR IN HELL: I. Blitzkrieg and the Book of Esther »