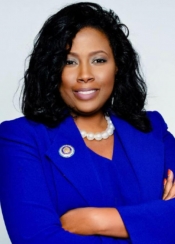 Sen. Jackson is not only a lawyer and a public servant, she is also unapologetically pro-life. Sen. Jackson is, in fact, the author of the Louisiana law requiring that abortionists have admitting privileges at hospitals, the very law which the Supreme Court struck down in June of this year. It is time to put Sen. Jackson on the highest court in the land so that she can uphold the rule of law and protect women and children from a position of strength. Her pro-life witness on the Supreme Court will be a beacon of hope to every pro-life advocate in the United States and around the world.

God willing, Supreme Court Justice Jackson will lead the court to overturn Roe v. Wade and end the Black genocide in our nation. For more than forty years, there has been no place more dangerous for a Black person than in the womb. Tens of millions of our Black brothers and sisters have been killed. The holocaust must stop and our broken country must heal from the wanton slaughter which is tearing us all apart. The time is now and the woman is Katrina Jackson.

Mr. President, I voted for you in 2016. I thank God that you won. Your opponent was, and remains, one of the most anti-life politicians in American history. But your triumph in 2016 was the beginning of the end for anti-life profiteering and advocates for Black genocide. By nominating Katrina Jackson to the United States Supreme Court, you will secure your place in history as a peacemaker, a patriot, a champion of the poor, and a pro-life hero for the ages. I believe that God has put you in office for this very decision which it is now your terrible burden to make.

President Trump, you are a maverick and you follow your heart. Sen. Katrina Jackson’s pro-life conscience, formed as a Christian by the Word of God, is the right person for this job. Please consider it in your heart and make your boldest move yet for the good of our country.

[Comment Guidelines - Click to view]
The Remnant values the comments and input of our visitors. It’s no secret, however, that trolls exist, and trolls can do a lot of damage to a brand. Therefore, our comments are heavily monitored 24/7 by Remnant moderators around the country.  They have been instructed to remove demeaning, hostile, needlessly combative, racist, Christophobic comments, and streams not related to the storyline. Multiple comments from one person under a story are also discouraged. Capitalized sentences or comments will be removed (Internet shouting).
The Remnant comments sections are not designed for frequent personal blogging, on-going debates or theological or other disputes between commenters. Please understand that we pay our writers to defend The Remnant’s editorial positions. We thus acknowledge no moral obligation whatsoever to allow anyone and everyone to try to undermine our editorial policy and create a general nuisance on our website.  Therefore, Remnant moderators reserve the right to edit or remove comments, and comments do not necessarily represent the views of The Remnant.
Last modified on Friday, September 25, 2020