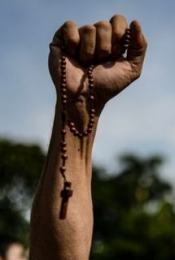 The Fate of Our Church and Culture May Rest With Us

The boy was listening to a story he had heard often before.

“They destroyed the churches. Catholics had to go underground. Children watched their parents hacked to death for confessing the Faith. Parents screamed as their children were taken away from their homes and raised elsewhere, away from their religious influence.”

“But,” the boy of the future said, “Didn’t they try to stop them first?”

“No.” The old man said. “It’s amazing what can happen while your eyes are glued to a TV screen.”

Around us, things are getting worse. Cities light up in flames. Cathedrals burn in silence. Catholics fight for the last toilet paper roll, but Our Lord they leave abandoned in the churches. The statues of our saints and Our Mother are disrespected, and outright offenses against God like Drag Queen story-times and abortion clinics have become so commonplace in our cities that we forget about them. Which of us thinks about the unborn lives lost more often than he does his next meal?

We complain, of course. We are quite good at that. We fill social media and our dinner tables with head shaking and loud denouncing of the anti-Christian culture that we bow to as soon as we step outside. Once outside we try to remain invisible in the crowd at work, smiling politely as our co-worker boasts how she left the Church and blushing if someone so much as asks if we are Catholic.

But what if we stepped outside and did something?

Once you are married, you are busy.

That is why it is up to us. The young adults of 2020. Will we put down our game consoles and take out our EarPods long enough to realize that the Kingdom of Christ is at stake and needs us to fight for it?

To fight. Not to repost. Not to stand silent. Not to play nice. The Church needs an army. A movement of young men and women who will leave their homes and not blend into the crowd but take up space in it.

Speak your values. Chalk, flyer, banner, start conversations and set up discussion tables in the public square. Attend, infiltrate, hold counter events, and protest peacefully events harmful to the Church. Journey to defend statues and the Faith under attack. Talk without shame about the Catholic view of dating and marriage. Show your classmates pictures of the Latin Mass.

Fight for Christ. It is nothing more than what you were born to do. It is what, in this moment, you are called to do.

Maybe you have been trying to sabotage the anti-Catholic culture alone. In that case, I ask you to join our team. Our army. Our crusade of young adults who will work together to restore Christ in our culture.

I am not asking every young adult to join this elite force. It’s a call to those young adults who make reclaiming the culture a priority. Those who aren’t slow to give up Saturday night to do some behind-the-scenes infiltration work. Those who will disguise themselves, take risks, and stand hours in the heat or the rain in order to accomplish a mission. Those who think quickly, are adaptable, and can beat the enemy at his game. I am calling on them to see if Christ is asking them to sacrifice for Him in this way.

The choice is yours, young Catholic.

Our Lord needs young daring members for His team: young adults unattached and daring enough to run, with the fire of the martyrs, towards any battle where Christ is being mocked and spit upon again.

This email address is being protected from spambots. You need JavaScript enabled to view it.. See the “Rules” picture below and the “Suggested Activities” to understand better this calling: 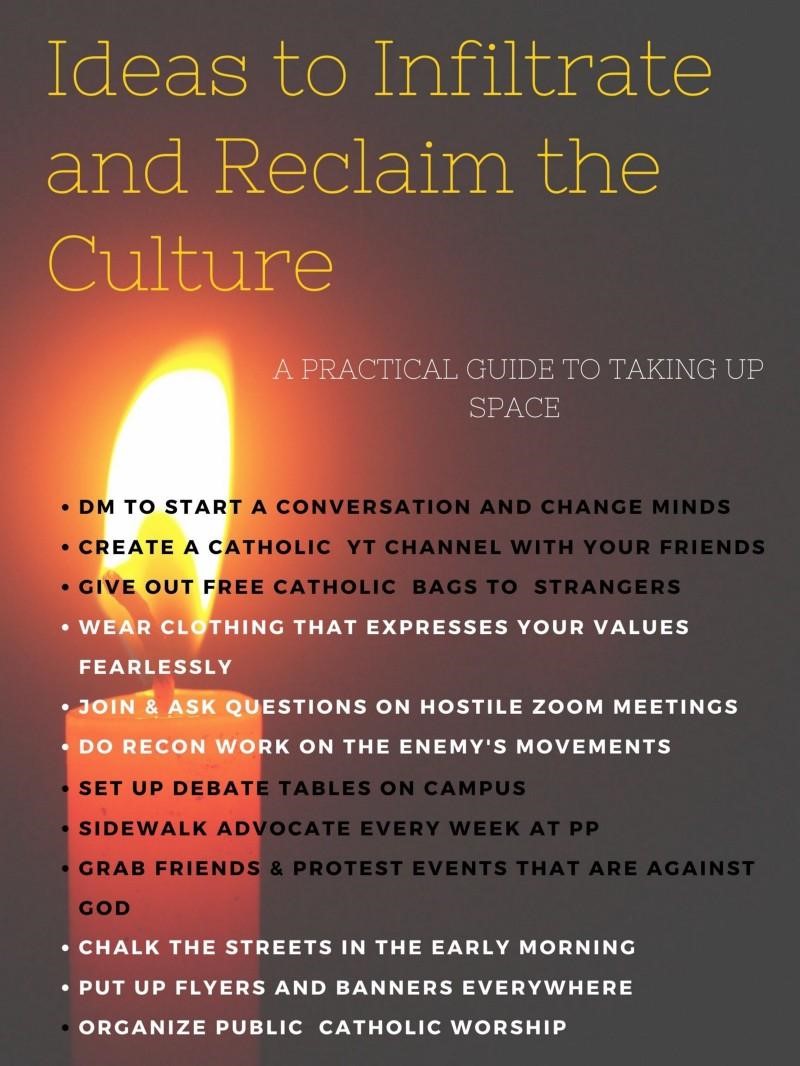 [Comment Guidelines - Click to view]
The Remnant values the comments and input of our visitors. It’s no secret, however, that trolls exist, and trolls can do a lot of damage to a brand. Therefore, our comments are heavily monitored 24/7 by Remnant moderators around the country.  They have been instructed to remove demeaning, hostile, needlessly combative, racist, Christophobic comments, and streams not related to the storyline. Multiple comments from one person under a story are also discouraged. Capitalized sentences or comments will be removed (Internet shouting).
The Remnant comments sections are not designed for frequent personal blogging, on-going debates or theological or other disputes between commenters. Please understand that we pay our writers to defend The Remnant’s editorial positions. We thus acknowledge no moral obligation whatsoever to allow anyone and everyone to try to undermine our editorial policy and create a general nuisance on our website.  Therefore, Remnant moderators reserve the right to edit or remove comments, and comments do not necessarily represent the views of The Remnant.
back to top
Last modified on Monday, August 17, 2020
Tweet

More in this category: « On Resisting Vatican II To Its Face (Archbishop Vigano’s Response to Fr. Thomas Weinandy, O.F.M.) MASK DELUSION: Why that useless piece of cloth on your face means the end of civil society »