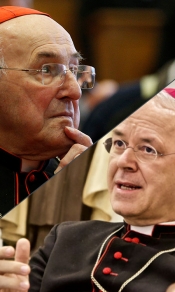 In a July 13th article, Italian journalist, Sandro Magister, penned an article entitled, “The ‘Fake News’ of Vigano and Company. Unmasked by a Cardinal.” In the article, Magister states that Cardinal Walter Brandmuller sent Bishop Athanasius Schneider a “summary of the inaccuracies” in Schneider’s June 24th statement where the bishop cited two examples of doctrinal errors of previous councils that had later been corrected by the Church. Brandmuller claims that the Council of Constance, approved by Martin V, did not contain error, as Schneider states, and that the Council of Florence, which designated the necessary matter for priestly ordination, did not contain doctrinal error either, as the matter for sacraments is a discipline and not a doctrine.

It will be interesting to see how Bishop Schneider responds, but for the purposes of this article, I’d like to focus on a point I think Magister misses in his article. After reciting Bradmuller’s statement, Magister dismissively writes, “That does it for Cardinal Brandmüller's memo on the “fake news” that is feeding the contestation of Vatican II which has its leading exponents in Schneider but even more so in Viganò.”

This statement is puzzling. Vigano takes a completely different approach than Schneider in pointing out Vatican II’s errors, which Magister himself cites earlier in his article.  Magister previously cited Viagno’s stance in his July 4th interview with John Henry Westen of LifeSite News:

Anyone with common sense can see that it is an absurdity to want to interpret a Council, since it is and ought to be a clear and unequivocal norm of Faith and Morals. Secondarily, if a magisterial act raises serious and reasoned arguments that it may be lacking in doctrinal coherence with magisterial acts that have preceded it, it is evident that the condemnation of a single heterodox point in any case discredits the entire document. If we add to this the fact that the errors formulated or left obliquely to be understood between the lines are not limited to one or two cases, and that the errors affirmed correspond conversely to an enormous mass of truths that are not confirmed, we can ask ourselves whether it may be right to expunge the last assembly from the catalog of canonical Councils. The sentence will be issued by history and by the ‘sensus fidei’ of the Christian people even before it is given by an official document.

As anyone can see, Vigano’s approach is completely different than Schneider’s. Schneider tries to argue that there are certain points of Vatican II which contradict prior magisterial teachings and that those specific points should be corrected. In contrast, Vigano argues that if Vatican II contains merely one error it discredits the entire document, and therefore the entire Council should be expunged.

Thus, the issue of whether previous councils have taught particular errors that were later corrected is irrelevant to Vigano. Vigano is instead saying that if any council makes numerous errors that contradict previous magisterial teaching or fails to confirm a mass of truths, that council can and should be extinguished as the local council of Pistoia was. Thus, Vigano’s criticism of Vatican II does not rely or depend on Schneider being correct regarding Constance or Florence. Thus, Magister’s dismissal of Vigano based on Brandmuller’s rebuke of Schneider is premature.

Magister also proposes this peculiar commentary on Vigano’s opinion, “If this rejection by Viganò of the whole of Vatican Council II is not a schismatic act, it is undoubtedly on the brink.” In my opinion there should be at least a six month moratorium on Catholic media using the word “schism” or “schismatic.” The neo-Catholic and progressive Catholic media use the term as the political left uses the terms “racist” or “racism.” They have used the words as political clubs for so long they have lost all real meaning and are only meant as amorphous shadows to cast over one’s opponents in order to discredit what they are saying without having to do the legitimate work of actually refuting their arguments.

Schism, properly so called, is rejecting in principle the idea that the Pope or the Catholic hierarchy has legitimate authority and willingly separating oneself from that authority. Thus, the Orthodox, constantly praised by Francis and ecumenical Catholics, are textbook schismatics as they reject the Pope’s claim of primacy and universal jurisdiction over the Church. What Vigano has said here is not even in the same ballpark as schism.

Vigano has done nothing more than point out the obvious: that Vatican II contradicts and undermines previously established Catholic doctrine, whether by letter or the need for “interpretation” of ambiguities, and refuses to confirm Catholic doctrine in many areas. As such, it has been an absolute disaster for the Church causing confusion among the faithful for decades. Vigano then proposes one possible solution for such a case which is to expunge the council from the catalog of councils.

There is absolutely nothing schismatic about this. Any future pope could easily rescind Vatican II because, although it was an ecumenical council, it defined nothing. It only attempted to explain previous doctrine to “modern man” and did so in confusing and ambiguous terminology which admitted of obvious heterodox interpretations and phraseology. As one pastor put it, Vatican II has no more binding authority than a bad sermon from 1965. The Council did not claim to teach any new doctrine and instead chose to remain on a “pastoral level.” Thus, if all it ended up doing was confuse the faithful, is it not common sense to simply remove the source of confusion? How Vigano suggesting a common sense act by a future pope to remedy clearly flawed and fallible council documents is beyond me.

One can imagine these same critics referring to the King of France and the University of Paris’ Catholic theologians as “schismatics” for calling on John XXII to renounce his erroneous opinion on the beatific vision. Soon after John XXII’s death, John XXII’s opinion was infallibly declared to be wrong. If these journalists had lived during that time they would have made a pastoral council out of John XXII’s error, forming catechisms, canon law, and liturgies around it, only to have it all revoked by a later pope with an infallible decree.

Indeed, this is all it will take to slay the Vatican II beast in the future; one simple papal bull that rescinds Vatican II and declares each and every error in the documents, either stated or implied, as “anathema sit.” Once this happens, we will officially be able to say, with Vigano, that Vatican II was the biggest “Fake News” in history.

[Comment Guidelines - Click to view]
The Remnant values the comments and input of our visitors. It’s no secret, however, that trolls exist, and trolls can do a lot of damage to a brand. Therefore, our comments are heavily monitored 24/7 by Remnant moderators around the country.  They have been instructed to remove demeaning, hostile, needlessly combative, racist, Christophobic comments, and streams not related to the storyline. Multiple comments from one person under a story are also discouraged. Capitalized sentences or comments will be removed (Internet shouting).
The Remnant comments sections are not designed for frequent personal blogging, on-going debates or theological or other disputes between commenters. Please understand that we pay our writers to defend The Remnant’s editorial positions. We thus acknowledge no moral obligation whatsoever to allow anyone and everyone to try to undermine our editorial policy and create a general nuisance on our website.  Therefore, Remnant moderators reserve the right to edit or remove comments, and comments do not necessarily represent the views of The Remnant.
back to top
Last modified on Tuesday, August 4, 2020
Tweet

More in this category: « THE CHILDREN OF LIGHT: Finding the Lumen Christi in Tenebrae of Persecution In the Face of Worldwide Apostasy, Bishop Robert Barron Attacks Traditional Catholics »