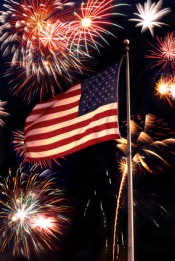 Right before Independence Day weekend was to commence and for three riotous and murderous weeks, a section of Seattle, Washington remained occupied by a small army of insurgents, who were most likely ignorant of the fact that Seattle’s namesake the Native American, Chief Seattle, was a slave owner.

Factual history never codifies well with the duplicitous leftist narrative that has America’s enemies cheering them on.

Throughout our fruited plain, calls for the Jefferson Memorial to be eradicated and the demolition of Mount Rushmore including the renaming of streets, parks, towns and cities are acknowledged as serious issues. Some even consider the national anthem as racially insensitive.  The speaker of the House, Nancy Pelosi, has ordered all portraits and statues of men who served in the Confederacy to be removed from the Capitol.

The renaming of Washington state and Washington, D.C.?

From Confederate monuments, the Founding Fathers to the only perfect man to walk the earth, Jesus Christ – nothing is sacred to the left whose blatant contempt for Christianity they no longer disguise.  Belief in the God of the Bible was instrumental in the creation of these United States.  Leftists know all too well that their rejection of God and His Word is instrumental in destroying America. 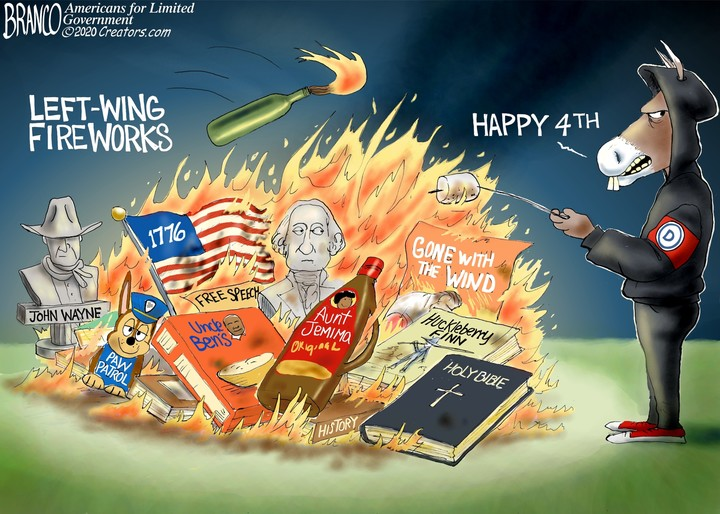 Where is today’s Martin Luther King Jr., who is unafraid to construct the protests as a peaceful, dignified, and politically effective means for dialogue, negotiation and conversion?

Many in authority do nothing to stop the rebels that some even tacitly support.

Such bedlam underscores how the cancer of leftism has metastasized throughout America’s institutions and in particular, academia.  These rebels are their historical and constitutional illiterate offspring who have been indoctrinated to believe our nation is a hideous place where truth is considered hate speech, abortion is health care, white folks are all “privileged” racists, and men can become pregnant.

Rewriting, and destroying the monuments to history is what communists, fascists and Islamic terrorists do.  Once upon a time in America, we were thankful, such fanatical behavior didn’t happen here.  Something very ugly is happening as we lose our longstanding traditional core American values that is now dominated by Orwellian extremes that just a generation ago was nothing short of science fiction.

Two distinct political flanks with contrasting philosophies are fighting an ideological war for our nation’s soul predicated upon revisionist history.

One side believes in the principles of the Founding Fathers where liberty, justice and opportunity for all is creed.  America has always been imperfect, as has every other nation.  The difference between them and us is how we have continually strived toward a greater and more inclusive union.  Our battle scars include 620,000 dead in the Civil War and 27 amendments to the Constitution that are testimonies to the American ideal.

The other side believes our nation was founded to preserve slavery and that capitalism is a discriminatory enterprise as outlined in the New York Times’ “1619 Project” that actually won a Pulitzer Prize.

Even the once-vaunted Pulitzer has been politicized.

Leftists want to expunge the Founders, while overthrowing capitalism for a socialist utopia that doesn’t exist.

Is it any wonder gun and ammo sales are booming?

Our Founders laid the foundation for a nation that remains a beacon of liberty resulting in a prosperous and just nation and, whether the left will admit it or not, the envy of the world. These masked looters and arsonists will never come close to achieving such greatness.

What we have is a first-degree case of a lack of gratitude.

How many rioters ever spent time in the Third World where clean water from a tap is a near-miracle and law and order an unrealized dream?

Their criminal behavior and ignorance are the byproduct of two generations that were taught America is evil and that other cultures, which are objectively more racist and sexist, should be celebrated and welcomed to our borderless shores.  Their historical ignorance fails to recognize how they are creating a totalitarian culture of fear and terror — something Americans have defeated, repeatedly.

Will the majority stay silent and allow this to continue?

If we do not right our American ship, future Independence Days will be filled with much more than harmless fireworks’ displays.

[Comment Guidelines - Click to view]
The Remnant values the comments and input of our visitors. It’s no secret, however, that trolls exist, and trolls can do a lot of damage to a brand. Therefore, our comments are heavily monitored 24/7 by Remnant moderators around the country.  They have been instructed to remove demeaning, hostile, needlessly combative, racist, Christophobic comments, and streams not related to the storyline. Multiple comments from one person under a story are also discouraged. Capitalized sentences or comments will be removed (Internet shouting).
The Remnant comments sections are not designed for frequent personal blogging, on-going debates or theological or other disputes between commenters. Please understand that we pay our writers to defend The Remnant’s editorial positions. We thus acknowledge no moral obligation whatsoever to allow anyone and everyone to try to undermine our editorial policy and create a general nuisance on our website.  Therefore, Remnant moderators reserve the right to edit or remove comments, and comments do not necessarily represent the views of The Remnant.
back to top
Last modified on Friday, July 3, 2020
Tweet

More in this category: « FIGHTING BACK: The Catholic Vote Love of God, Family and Country »