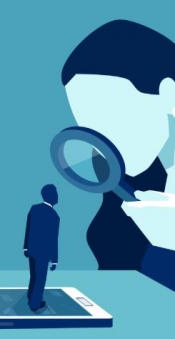 Many headlines can tell a story that no novel can and in one concise phrase.

House Democrats have put forward legislation that will track anyone who has tested positive for COVID-19 and require them to quarantine.  What stood out was the bill’s number: 6666 and the legislation’s ensuing acronym (TRACE) meaning “Testing, Reaching, And Contacting Everyone Act.”

Shakespearian in scope is the everlasting question, what’s in a name?

The $100 billion legislation would “award grants to eligible entities to conduct diagnostic testing for COVID–19, to trace and monitor the contacts of infected individuals, and to support the quarantine of such contacts.”

You want some semblance of normalcy, welcome to everlasting contact tracing.

Smelling opportunity, Silicon Valley through the auspices of Apple and Google are developing their own tracing apps. Facebook is harnessing “precise data” that “will help governments and public health officials make decisions.”

Such methods and the technology it employs are nothing new as Russia uses facial recognition software for quarantining, while China operates thermal scanners.

Healthcare is just another blunt instrument of control that totalitarian societies use to track their citizens. It is no coincidence why Democrats lap praise upon Cuba’s healthcare system and in so doing reveal how authoritarian they really.

There is no life without liberty.

Here's what it looks when the police come knocking (Click "Full Screen" and go to 1:55:51)

As we sink deeper into the abyss of administrative bureaucracy, the growth of commercial surveillance will only magnify government surveillance.

In a recent white paper, even the left leaning Brookings Institution has questioned the benefits of contact tracing through apps, whose accuracy remains debatable and is susceptible to hacking.

How much do we really value privacy? We surrender it habitually to friends, doctors, and companies with whom we wish to do business.  Who among us reads the fine print and comprehends how our data is mined, evaluated and allocated?

The youngest among us are accustomed to having their personal information posted throughout social media and are seemingly indifferent to the monitoring of their private data by the government.

Perhaps what we value more is the freedom to choose.

The historical origins of privacy extends to the English practice of general warrants that authorized the British in pre-revolutionary America to search whomever, whenever and wherever they wished.

Our nation’s own documented origins of privacy have been identified by the Supreme Court and found throughout our Constitution, not the least of which is the Fourth Amendment, which prohibits searches and seizures without warrants based on probable cause of criminal behavior.  In the landmark Supreme Court case Griswold v. Connecticut argued in 1965, the Court found that there was a right to privacy imbedded in the Constitution.

Founding Father, Ben Franklin schooled a young republic well over two centuries ago when he said, “Those who would give up essential liberty, to purchase a little temporary safety, deserve neither liberty nor safety.”  The most important word in Franklin’s reference is “temporary” modifying “safety.”

Any benefit from increased safety is always temporary.

The price we pay in the loss of liberty will be permanent.

Far too many Americans think it could never happen here.

However, it is and right in front of their lying eyes.  Judging by what we are learning about the FBI and others in the previous presidential administration and state governors who continue to extend lockdowns, why should anyone trust government?

When Big Government marries Big Tech their offspring is tyranny, oppression and coercion.  The left have systematically been exploiting every crisis for decades in order to overthrow the rule of law, faith, and reason.

Americans acquiesce too easily to government overreach, especially in a crisis. Perhaps most do not understand that constitutional rights are not optional.

What we cannot do is empower the decision to the tech billionaires of Silicon Valley and Uncle Sam’s unelected army of bureaucrats.

[Comment Guidelines - Click to view]
The Remnant values the comments and input of our visitors. It’s no secret, however, that trolls exist, and trolls can do a lot of damage to a brand. Therefore, our comments are heavily monitored 24/7 by Remnant moderators around the country.  They have been instructed to remove demeaning, hostile, needlessly combative, racist, Christophobic comments, and streams not related to the storyline. Multiple comments from one person under a story are also discouraged. Capitalized sentences or comments will be removed (Internet shouting).
The Remnant comments sections are not designed for frequent personal blogging, on-going debates or theological or other disputes between commenters. Please understand that we pay our writers to defend The Remnant’s editorial positions. We thus acknowledge no moral obligation whatsoever to allow anyone and everyone to try to undermine our editorial policy and create a general nuisance on our website.  Therefore, Remnant moderators reserve the right to edit or remove comments, and comments do not necessarily represent the views of The Remnant.
back to top
Read 2262 times Last modified on Saturday, May 23, 2020
Tweet