Coronamania III:  Requiem for a Myth 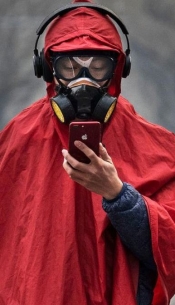 While patiently waiting for Coronamania to die its natural and inevitable death, one might now, at long last, pause to reflect upon the stark but illuminating insights being gradually disclosed to our overly-credulous, credulous, incredulous, or overly-incredulous minds.  A post mortem for something that has not as yet reached its complete demise is most certainly premature.  However, as is now most evident, the smoke clouds of illusory informational bombardment are beginning to disperse, and some small wisps of intellect-reviving fresh air are beginning to circulate.  A reasoned (and hopefully reasonable) evaluation of this biological storm and its nightmarish effects upon the collective human psyche may be carefully, albeit somewhat warily, undertaken.

More than anything else, CV has pointed out the basic insecurity of most, if not all people.  Henry David Thoreau once stated: “The mass of men lead lives of quiet desperation.”  The suggestion that some microbe could undermine the reasoning faculties of even the most erudite members of our human species leaves much to be pondered over. The organized “madness” of knee-jerk decision-making on the part of the wiser ones—the governmental, entrepreneurial, and ecclesiastical leaders—has left humanity bereft of any clear directional vision or orientation.  While seeking to “pick up the pieces” of a shattered exposition of ineptitude, the leaders, have, in the words of Alexander Pope, “Scattered their notions as they fell, and, if they rhymed and rattled, all was well.”

Perhaps what this experience has highlighted is, ironically, a general lack of wisdom—natural or supernatural—on the part of the presumed leaders of the world.  As Alasdair MacIntyre has observed in After Virtue (page 263): “If the tradition of the virtues was able to survive the horrors of the last dark ages, we are not entirely without grounds for hope.  This time, however, the barbarians are not waiting beyond the frontiers; they have already been governing us for quite some time.  And it is our lack of consciousness of this that constitutes part of our predicament.” Can the necessary and absolutely requisite wisdom of governance be systematically injected into those charged with determining the course of the human race, our very leaders, like some type of miraculous and enlightening vaccine?  Manifestly no.

Wisdom is not the same as knowledge, for a person might know much and still be unwise.  Wisdom indeed involves knowledge, but it also includes the ability, the inclination, and the steady purpose of putting knowledge to good use.  St. Thomas Aquinas (1225-1274) says in his book Summa Contra Gentiles that a man is to be called wise when he knows what he has to do and plans and manages to do it well.  Thus wisdom involves several things: an end or purpose to be attained; an appreciative knowledge of this purpose; an ability, an inclination, and a steadfast effort to achieve the known purpose in the best possible manner.  Thus it is wisdom to work for a known good purpose in a steady, devoted, and enlightened way.

The underlying supposition here is “known good purpose.”  Without known good purpose wisdom cannot be implemented.  Can “smear campaigns” be legitimately considered “known good purposes”, even though they might be considered effective or “smart” politics?  The old fallacy in classical argument was that if a person could not counter another person’s argument, the first person attacked the second person.  This fallacy was called the ad hominen argument.  Many of our current governmental, entrepreneurial, and ecclesiastical leaders simply do not want to play by any ethical or reasoned rules.  Their “known good purposes” are, therefore, suspect.   Perhaps they consider “playing by the rules” a constraint upon their own personal “freedom.”  Perhaps “dirty pool” is “dirty pool.”  If you can’t take the heat, get out of the kitchen, etc.  In any case, lack of known good purpose causes wisdom to evaporate (as if it were ever there in the first place), and as a consequence, humanity suffers.  How long will the human race—or, most particularly, men of good will—tolerate this insufferable abuse?

Sweet Heart of Mary, Be Our Salvation

[Comment Guidelines - Click to view]
The Remnant values the comments and input of our visitors. It’s no secret, however, that trolls exist, and trolls can do a lot of damage to a brand. Therefore, our comments are heavily monitored 24/7 by Remnant moderators around the country.  They have been instructed to remove demeaning, hostile, needlessly combative, racist, Christophobic comments, and streams not related to the storyline. Multiple comments from one person under a story are also discouraged. Capitalized sentences or comments will be removed (Internet shouting).
The Remnant comments sections are not designed for frequent personal blogging, on-going debates or theological or other disputes between commenters. Please understand that we pay our writers to defend The Remnant’s editorial positions. We thus acknowledge no moral obligation whatsoever to allow anyone and everyone to try to undermine our editorial policy and create a general nuisance on our website.  Therefore, Remnant moderators reserve the right to edit or remove comments, and comments do not necessarily represent the views of The Remnant.
back to top
Read 2425 times Last modified on Monday, May 11, 2020
Tweet

More in this category: « Gov. Andrew Cuomo for President? THE WATER CARRIERS: Citizen, where is your mask? »