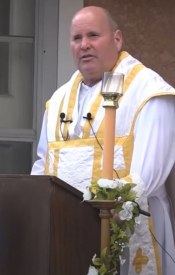 On Good Shepherd Sunday, Father speaks on the nature of true "good shepherds" and encourages people to stay strong in the fight to reopen the churches.

Father also questions the hirelings who have refused to allow Baptisms, confessions, and Last Rites, even when the faithful seeking these sacraments are in danger of death.

"Crisis reveals character," says Father, "and if nothing else, this crisis has revealed the characters of bishops and priests: Which ones are fully conformed to model of the Good Shepherd, Jesus Christ. And which ones have shown themselves to be hirelings, who flee at the sight of danger and who put boulders at the entryway of the sheepfold."

"I think those who have done that," he continued, "will find that after this crisis is over, there is a price that they will have to pay for their failure."

[Comment Guidelines - Click to view]
The Remnant values the comments and input of our visitors. It’s no secret, however, that trolls exist, and trolls can do a lot of damage to a brand. Therefore, our comments are heavily monitored 24/7 by Remnant moderators around the country.  They have been instructed to remove demeaning, hostile, needlessly combative, racist, Christophobic comments, and streams not related to the storyline. Multiple comments from one person under a story are also discouraged. Capitalized sentences or comments will be removed (Internet shouting).
The Remnant comments sections are not designed for frequent personal blogging, on-going debates or theological or other disputes between commenters. Please understand that we pay our writers to defend The Remnant’s editorial positions. We thus acknowledge no moral obligation whatsoever to allow anyone and everyone to try to undermine our editorial policy and create a general nuisance on our website.  Therefore, Remnant moderators reserve the right to edit or remove comments, and comments do not necessarily represent the views of The Remnant.
back to top
Read 4649 times Last modified on Sunday, May 3, 2020
Tweet

More in this category: « Test Right Up The Red Pope »