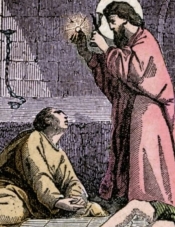 Known officially as Saint Valentine of Rome, this third-century Roman was martyred and then buried on the Via Flaminia to the north of Rome. In 1969, the Roman Catholic Church removed St. Valentine from the General Roman Calendar, of course, but he is still recognized as a saint in the February 14 day of Roman Martyrolgy.

The legends attributed to the mysterious saint are as inconsistent as the actual identification of the man. St. Valentine was arrested for his efforts to convert the pagans to Christianity. He was sent to Rome under the emperor Claudius II. According to the popular hagiographical identity, and what is believed to be the first representation of St. Valentine, the Nuremberg Chronicle, St. Valentine was a Roman priest martyred during Claudius' reign.

The story tells that St. Valentine was imprisoned for marrying Christian couples and aiding Christians being persecuted by Claudius in Rome. Both acts were considered serious crimes. A relationship between the saint and emperor began to grow, until Valentine attempted to convince Claudius of Christianity. For his "rigidity", Valentine was sentenced to death, with Claudius commanding him to renounce his faith or be beaten with clubs and beheaded.

St. Valentine refused to renounce his faith and Christianity and was executed outside the Flaminian Gate on February 14, 269. Pope Julius I is said to have built a church near Ponte Mole in his memory, which for a long time gave name to the gate now called Porta del Popolo, formerly, Porta Valetini.

Archaeologists have unearthed a Roman catacomb and an ancient church dedicated to St. Valentine. In 496 AD Pope Gelasius marked February 14th as a celebration in honor of his martyrdom.

St. Valentine, Pray for us.

[Comment Guidelines - Click to view]
The Remnant values the comments and input of our visitors. It’s no secret, however, that trolls exist, and trolls can do a lot of damage to a brand. Therefore, our comments are heavily monitored 24/7 by Remnant moderators around the country.  They have been instructed to remove demeaning, hostile, needlessly combative, racist, Christophobic comments, and streams not related to the storyline. Multiple comments from one person under a story are also discouraged. Capitalized sentences or comments will be removed (Internet shouting).
The Remnant comments sections are not designed for frequent personal blogging, on-going debates or theological or other disputes between commenters. Please understand that we pay our writers to defend The Remnant’s editorial positions. We thus acknowledge no moral obligation whatsoever to allow anyone and everyone to try to undermine our editorial policy and create a general nuisance on our website.  Therefore, Remnant moderators reserve the right to edit or remove comments, and comments do not necessarily represent the views of The Remnant.
Last modified on Friday, February 14, 2020