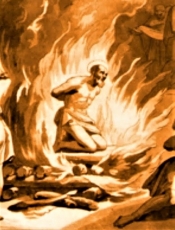 Growing up among the Greek-speaking Christians of the Roman Empire, Polycarp received the teachings and recollections of individuals who had seen and known Jesus during his earthly life. This important connection – between Jesus' first disciples and apostles and their respective students – served to protect the Catholic Church against the influence of heresy during its earliest days, particularly against early attempts to deny Jesus' bodily incarnation and full humanity.

Polycarp's most significant teacher, with whom he studied personally, was St. John – whose contributions to the Bible included not only the clearest indication of Jesus' eternal divinity, but also the strongest assertions of the human nature he assumed on behalf of mankind. By contrast, certain tendencies had already emerged among the first Christians – to deny the reality of Jesus' literal suffering, death, and resurrection, regarding them as mere "symbols" of highly abstract ideas. With John's help, Polycarp may have been the one who compiled, edited, and published the New Testament.

[Comment Guidelines - Click to view]
The Remnant values the comments and input of our visitors. It’s no secret, however, that trolls exist, and trolls can do a lot of damage to a brand. Therefore, our comments are heavily monitored 24/7 by Remnant moderators around the country.  They have been instructed to remove demeaning, hostile, needlessly combative, racist, Christophobic comments, and streams not related to the storyline. Multiple comments from one person under a story are also discouraged. Capitalized sentences or comments will be removed (Internet shouting).
The Remnant comments sections are not designed for frequent personal blogging, on-going debates or theological or other disputes between commenters. Please understand that we pay our writers to defend The Remnant’s editorial positions. We thus acknowledge no moral obligation whatsoever to allow anyone and everyone to try to undermine our editorial policy and create a general nuisance on our website.  Therefore, Remnant moderators reserve the right to edit or remove comments, and comments do not necessarily represent the views of The Remnant.
back to top
Read 1191 times
Tweet

More in this category: « Let’s Not Be Rigid About Rigidity READ it NOW: January 31st Remnant Newspaper »