Let’s Not Be Rigid About Rigidity 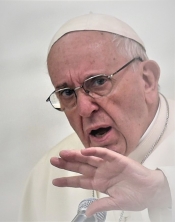 Cardinal Biffi, in the Lenten retreat that he preached to Pope Benedict and to the Curia, noted the following:

"There are absolute values such as the good, the true and the beautiful... and there are relative values such as solidarity, love of peace and respect for the natural world. If we make [relative values] into absolutes, in uprooting them from, or even opposing them to the proclamation of the fact of Salvation, then these values push us towards idolatry, and they become obstacles on the path to salvation. If, for the sake of an opening to the world and in order to dialogue with everyone, the Christian believes that he must downplay the question of eternal salvation, he prevents the personal connection with Christ, and he finds himself on the side of the anti christ."

But surely unity and reconciliation are absolute goods and always desired by God and pleasing to Him! Really?

We learn in Sacred Scripture that after having engineered the death of Christ, Pontius Pilate and King Herod became friends. Was this peace pleasing to the Lord?

Hell has its own unity, as our Lord attests. That unity is enforced presumably by power, terror and hatred.

Pope Francis returns frequently to his worry about and warnings about rigidity. He did so again in his Christmas address on December 22 this year.

Rigidity is not a sin or a moral fault. It is a neutral and relative value, an attitude which requires me to ask: what is this person rigid about? If he is rigid about his own *mere* opinions, treating them as absolutely certain, this is wrong and a sign and symptom of pride.

If he is rigid in his adherence, and in his certainty about a truth of the Faith, proposed infallibly by the Church, this is good and indeed very good.

If a man is rigid about not forgiving his brother, a brother who regrets his fault and who asks for pardon, then this obstinacy is a sin. But, if he is rigid about not committing adultery, not accepting any compromise in keeping his vows, then that is an essential element of marital fidelity, and indeed is required for eternal salvation.

Similarly with what’s being sad. If a man is sad about the effort needed to seek the Face of the Lord, then this is the capitol sin of acedia. But if a man, or in this case, a Man, "is sorrowful, sorrowful unto death", because of our sins and their consequences, then this is an expression of burning Charity, and is very, very good.

Should we not admire the rigidity of the gold-medal winning, Olympic athlete?

----- Fr Paul McDonald is a priest of the Diocese of Saint Catharines in Ontario.

[Comment Guidelines - Click to view]
The Remnant values the comments and input of our visitors. It’s no secret, however, that trolls exist, and trolls can do a lot of damage to a brand. Therefore, our comments are heavily monitored 24/7 by Remnant moderators around the country.  They have been instructed to remove demeaning, hostile, needlessly combative, racist, Christophobic comments, and streams not related to the storyline. Multiple comments from one person under a story are also discouraged. Capitalized sentences or comments will be removed (Internet shouting).
The Remnant comments sections are not designed for frequent personal blogging, on-going debates or theological or other disputes between commenters. Please understand that we pay our writers to defend The Remnant’s editorial positions. We thus acknowledge no moral obligation whatsoever to allow anyone and everyone to try to undermine our editorial policy and create a general nuisance on our website.  Therefore, Remnant moderators reserve the right to edit or remove comments, and comments do not necessarily represent the views of The Remnant.
back to top
Read 3799 times Last modified on Saturday, January 25, 2020
Tweet