FROM BETHLEHEM TO TURIN: Discovering the Face of the Child Jesus 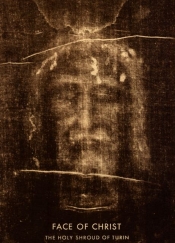 It’s that time of year again, and Taylor Swift’s cover of Last Christmas has once again pervaded the land. The digital powers that be seem to have arranged that no matter what radio station or streaming service is on, Last Christmas should play every six songs.

You arrive at a store in the mall only to hear TSwift announce from within, “Last Christmas, I gave you my heart…” Since you’ve already heard this song twenty-six times, you cringe and quickly dive into another store—which is already 1:39 minutes into the same hit: “This year, to save me from tears, I’ll give it to someone special...” It’s enough to make you panic-buy thirty hideously identical pairs of snowflake socks (thus completing your shopping in one fell swoop), rush home and remain buried in your basement with sound-canceling headphones until January.

Although there is plenty of terrible Christmas music, this particular song gets my goat because its lyrics are so frustratingly illogical. So last Christmas, she gave this fellow her heart, and the very next day, he gave it away. Fair enough. We all make mistakes. Lesson learned, one would hope, and sure enough, she tells us that this year, to save her from tears, she’s going to—what? Make better decisions? Avoid judging a book by its cover? Consider that handsome is as handsome does? Surely she must have learned something that she’s prepared to share with us.

Then again, maybe expecting rhyme and reason from a pop song is an enterprise doomed to failure.  But there is one tiny nugget of received wisdom that this lyricist was able to get right, one tiny piece of gold that can be salvaged from the floating plastic debris in which this song is otherwise awash. This tiny nugget is that Christmas is about giving.

Everyone knows that the first Christmas was about God giving us His Son as a member of the human race, true God and true Man, in a display of generosity so inconceivable to the human mind that cynics and haters ever since have tried to say that it didn’t really happen and that we shouldn’t be celebrating it.

But Christmas is so deeply ingrained in Western civilization that even governments backed by powerful police forces couldn’t stamp it out. So the haters decided to try to wean us off it by playing Santa Claus is Coming to Town on repeat to the point of permanent brain damage and covering everything in flashing LED lights with horrible bluish-white undertones.

The way to fight back is not by hiding in our basements with sound-canceling headphones, but by rejecting fake Christmas and embracing the real Christmas—the day when we honour Jesus Christ, the greatest gift ever given, by giving tokens of affection to those we love. In this we imitate the Three Wise Men, kings and scholars, who brought gold, frankincense and myrrh to give the Holy Infant.

There’s a genius historian by the name of John Rao who’s written about the Wise Men, and he points out something that anyone who follows politics or who’s involved with academia will understand. Ironically, he says, those most ambitious for power are least likely to ally themselves with serious wisdom that would root their work in a “truly substantive great mission" that would endure for centuries. Instead, they put the preservation of their own power first and try to drum up support from passing ideological trends (environmentalism, anybody, or gender ideology?)

There is a similar irony at work among academics. “Those most interested in the search for truth,” Rao writes, “are often the least willing to commit their lives to wisdom when it is discovered.” This, he says, is partly because of the scholar’s knowledge of the difficulty of reaching a definite conclusion, and partly because of a fear that his own importance as a hunter would be deflated should truth actually be attained. (Ouch.)

In the Three Wise Men, kingship, wealth and great learning were united. Surely the double temptations of political power and academic status would have applied to them with especial force. And yet, as Rao says, "The Wise Men, violating all of the best principles of academic objectivity, abandoning all the arrogance of political, social, and military might, placed their wisdom and strength at the service of a helpless child.”

When you think about it, this was an incredibly unlikely act of courage. Wealth, knowledge and power knelt down before the Truth, tacitly admitting that they didn’t have all the answers, saying in effect, “We’re here to serve.”

A good way to reclaim Christmas from the haters and cynics, it seems to me, would be to take a leaf out the Kings’ book and put our earthly achievements, such as they are, at the service of the Truth. There are about a million worthy ways to do that, but one small way, if you’ll permit a suggestion, would be to support a scholar I know who’s searching for the truth about something that most of the world has left in the dust of its chariot wheels.

You may be familiar with the history of the Shroud of Turin, which remains a scientific enigma despite claims that it has been “debunked”: no one has yet been able to show how the image on its surface was created. In the 70s, a team of crack scientists (many from labs associated with NASA) led by US Airforce physicist Dr. John Jackson went to Turin to carry out an examination of the Shroud, where they determined that the image was that of a real human form of a scourged, crucified man, not the product of an artist, and that the bloodstains were real human blood.

In 1988, radiocarbon testing (carried out by an unrelated group of labs) was performed on the Shroud, and it was declared to be of 14th century origin. Although the image remained an enigma, the world shrugged and moved on.

But plenty of people had nagging doubts—especially John Jackson and the scientists who had examined the Shroud firsthand in 1978. Radiocarbon tests have their limitations, which is why they are usually part of a broader range of scientific tests so anomalous results can be easily spotted.

Archaeological evidence was then found by John Jackson’s research lab at the Turin Shroud Center of Colorado, showing that the Shroud had been present in Constantinople and known throughout Byzantium well before the medieval era. Some scholars—including the head of the radiocarbon lab at the University of Oxford—agreed that the case wasn’t really closed.

What’s the truth about the Shroud? Some people think it’s better not to know, because that way we can believe whatever we like without the inconvenience of fact. But that’s not John Jackson’s take. He is a scientist with a profound love for the truth, and he wants to know as much as science can know about the Shroud. If that pursuit of truth seems worth supporting to you, consider helping out the Turin Shroud Center of Colorado this Christmas.

Jane Stannus is a journalist and translator. Her work has appeared in the UK Catholic Herald, Crisis Magazine and the Spectator USA. She is not affiliated with the Turin Shroud Center of Colorado in any way.

[Comment Guidelines - Click to view]
The Remnant values the comments and input of our visitors. It’s no secret, however, that trolls exist, and trolls can do a lot of damage to a brand. Therefore, our comments are heavily monitored 24/7 by Remnant moderators around the country.  They have been instructed to remove demeaning, hostile, needlessly combative, racist, Christophobic comments, and streams not related to the storyline. Multiple comments from one person under a story are also discouraged. Capitalized sentences or comments will be removed (Internet shouting).
The Remnant comments sections are not designed for frequent personal blogging, on-going debates or theological or other disputes between commenters. Please understand that we pay our writers to defend The Remnant’s editorial positions. We thus acknowledge no moral obligation whatsoever to allow anyone and everyone to try to undermine our editorial policy and create a general nuisance on our website.  Therefore, Remnant moderators reserve the right to edit or remove comments, and comments do not necessarily represent the views of The Remnant.
back to top
Read 3195 times Last modified on Friday, December 20, 2019
Tweet