The following is one of my favorite satire pieces from the Remnant's Alium Cepa News Network (A-CNN).

I reproduce it here for your reading enjoyment...

By I. M. Persiflage

It is with great animosity that I file this official complaint regarding my recent assignment to possess a high school student at Blessed Karl Rahner Catholic Community. As you are well aware I am a very junior demon and this was my first possession assignment outside of Hell. The training I received from senior demons in preparation for this assignment did not prepare me in the least for what I experienced. From what I was told, I would be sent into the world to fight the forces of good and score a victory for the powers of Hell. Instead I myself was exposed to a Hell I have heretofore never experienced.

As you are aware, as a junior demon I have been assigned to the more shallow circles of Hell and my contract explicitly states I am not to be exposed to anything approaching the 5th circle or greater. As you will see my experience during this possession rates at least an 8th, if not 9th circle level of torment. I have included a statement of what transpired below as evidence of my claims.

In addition, I am petitioning for compensation. I want to be assigned for at least six weeks to demon corps seven, which is assigned to tempt Catholic politicians. As you know the demons in this corps do practically nothing since it is impossible to tempt people who have no conscience. This will give me adequate time to recover from my traumatic possession experience inflicted by the negligence of those senior demons who failed to properly prepare me. Thank you for your consideration of this request.

Statement Regarding the Possession of Hunter Jones on February 22, 2013

I was assigned to possess a high school student by the name of Hunter Jones at Blessed Karl Rahner Catholic Community in California, U.S.A. Hunter was disinterested in church, but was being forced by his parents to participate in the teen band that played at the parish rock Mass. I took possession of Hunter as his band played a Metallica song for the Eucharistic hymn at the 5pm Saturday Mass. The pastor set up a meeting with me the next week.

The day of the meeting finally arrived. My first problem was that I was unable to recognize the man who answered the door at the church that day as a Catholic priest. My demonic training sessions in possessions had all assumed that the priest would be clearly identifiable, dressed in clerics. It took several minutes for me to realize that the man in the corduroy pants and reindeer sweater who greeted me was, in fact, the pastor. Upon realizing this man was a priest, I thought back to my training which taught me to first insult the priest by refusing to refer to him as "Father." Instead I was instructed to use only his first name. I thought this tactic would be especially disrespectful in this case since I had possessed the body of a mere teenager and would be addressing an adult. Since the pastor's name was Fr. Kevin Smith, I immediately and repeatedly referred to him as Kevin, emphasizing his name sarcastically when I did so. Unfortunately, my hopes for an indignant and angry reaction were dashed. Instead of becoming angry, Fr. Smith laughed at my "formality" and urged me to simply call him "Kev." 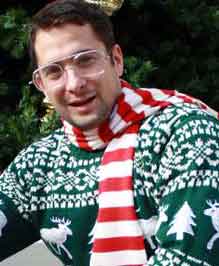 Kev then sat me down, offered me a cup of hot cocoa, and asked what was troubling me. Although, admittedly straying from protocol at this point, I simply had to address the music he had playing in the background. It did indeed trouble me and served as a distraction to my mission. Yes, I have heard extremely bad music in the shallower circles of Hell, but these sounds were even more than I could endure. Despite becoming mildly irritated that I was not a fan of John Tesh, Kev still managed to keep a happy demeanor as he turned the music off.

Recalling the tactics I learned in my training, I next moved on to insulting and mocking the priest's Faith. I indignantly told Kev that I in no way believe in the Real Presence of You Know Who in the Eucharist and that he and his silly congregation of fools were worshipping mere bread every Sunday (or Saturday as the case may be). Expecting my blasphemous words to infuriate Kev, you can imagine my shock when he laughed at my invective. Kev, then explained that neither he nor his congregation worshipped bread, but not for the reason I would suspect. He claimed I had a false "Pre-Vatican II" understanding of "Eucharist" that I was rejecting. He proceeded to try to "enlighten my understanding" (his words) by explaining that the spirit of You Know Who is merely represented by the symbols of bread and wine and that neither he nor the congregation worshipped these symbols. After fearing for a moment that I had mistakenly possessed a member of a Baptist congregation, I glanced at a nearby bulletin and confirmed that this "community" was indeed labeled Catholic.

As this tactic had obviously hit a dead end, I decided to shift to morality. I told Kev I did not believe in mortal sin, and that neither he nor the Church had the right to tell me what is right or wrong. I told him I was quite capable of determining morality for myself and that I would continue to do whatever I pleased. I let him know, quite snidely, that I planned on committing various acts he considered to be "mortal sins" and that I believed these acts to be exciting, liberating, and fulfilling. Again, his reaction was shocking. He smiled and commended me for my healthy rejection of scrupulosity and informed me that "mortal sin" was a scary medieval term that is no longer used in the Church. To reassure me, he then referenced an apparent biblical tale I am not familiar with. It involves a talking cricket who advised a certain boy in his care to let his conscience be his guide. This same cricket also apparently advocated wishing upon stars. This seemed to be very close to the sin of divination. So I then proudly informed Kev he was guilty of advocating astrology and insulting You Know Who. Kev was amused by this news and told me not to worry. He said he is strongly against divination since Sagittarians are naturally skeptical of such things.

At this point I was completely confused and off of my game. Clearly my demonic preparation for this assignment was lacking. Every tactic I tried had no effect. My training had prepared me for holding out against Holy Water, exorcism prayers and crucifixes, yet these were nowhere to be found. Furthermore my adversary priest was agreeing with every heresy and blasphemy I could utter. Frustrated, I reverted to possession 101 and started angrily spouting curse words at Kev. Kev then told me to let my anger "flow" as it wasn't good to keep it repressed.

Finally, exhausted from cursing, I took a reprieve to catch my breath. Kev then told me he just thought of something that would help inspire me and cheer me up. He mercifully left the room for a few minutes as I tried to regroup. When he returned he told me that a Sister Mary Pat had been practicing for this Sunday's Mass in the chapel and wanted to share something very special with me. Thinking I may finally get to insult a habited orthodox nun like the ones I was warned about in my training, I welcomed the opportunity. However, no training could prepare me for the Hell I was about to endure.

As I readied myself in my chair, Kev unexpectedly started playing music. Again the music was horrific, this time with a woman singing. I was later told by senior demons in lower circles of Hell that the woman was "Celine Dion" and her music was quite popular there. In any case, the music, unnerving as it was, was about to be the least of my worries. As I stared at the door, in walked what may possibly be the largest human being I've ever seen. To make matters worse, she was dressed in a skin tight black leotard with the white face paint of a mime. She proceeded to demonstrate a liturgical dance she was preparing for the Sunday Mass. At one point she came precariously close to losing her balance near my chair. This caused me to briefly fear for my life, before remembering I was merely possessing someone else's body.

Slowly coming to my senses after overcoming the initial horror, I decided that I needed to take drastic action in order to turn the tables and invoke fear in these people. I needed to let them know once and for all the demonic power they were dealing with. Although not trained in levitation, I had heard senior demons speak of it as a surefire way to instill fear in humans. Thus it came to me that if I could levitate Sister Mary Pat, it would scare her, causing her horrifying mime show to stop. Despite trying my hardest over the next five minutes with all of my demonic powers I could not so much as budge the colossal liturgical dancer. With that, I gave up. In a scream of horrifying agony I fled the body of Hunter Jones, preferring the circles of Hell to those torments.

More in this category: « Rock the Rock Concert: Being Catholic is Being Cool No Crisis in the Church, Martians are Our Brothers »