Catholic Tradition Alive and Well in the Antipodes 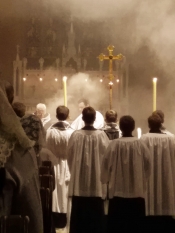 It’s refreshing to be able to present an article about something positive happening in the Church, as a change from exposing dissent and heresy. Last weekend, Australia’s largest traditional Catholic event was held in honour of Christ the King. The annual Christus Rex pilgrimage is our answer to the Paris to Chartres pilgrimage and encouragingly, is growing in popularity, especially among young people.

The Christus Rex Pilgrimage (CREX) was established 29 years ago to honour the feast of Christ the King, as promulgated by Pope Pius XI in his encyclical Quas Primas. Pilgrims walk 90 kilometres over three days, finishing at the Bendigo Cathedral on the Feast of Christ the King. The walk is physically demanding, but pilgrims are joyful, offering their pains for the good of Holy Mother Church and their own intentions. This year, in accordance with an appeal from Bishop Schneider, the last leg of the trip was offered as reparation for the sins of idolatry committed in Rome during the Amazon synod. 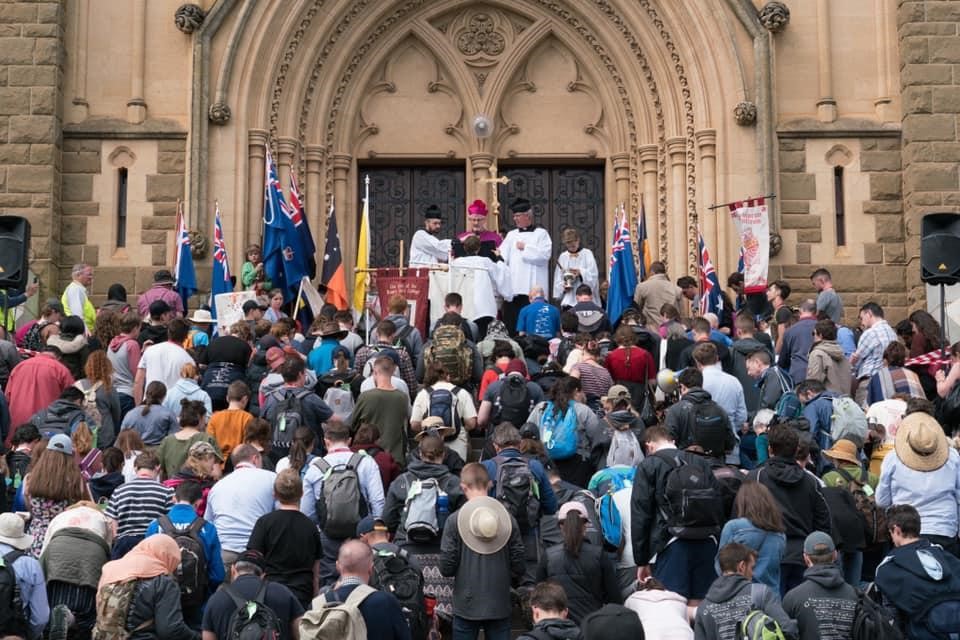 I caught up with one of the original Pilgrims, Fr Terence Mary Naughtin, a Conventual Franciscan, to ask him some questions about this wonderful event.

Fr. Terence, thank you for agreeing to do this interview for The Remnant.

The first pilgrimage had only a dozen pilgrims: what is the average number of pilgrims these days, and what has been the largest number so far?

The average is between 300-400 but frequently this is exceeded.  We have had up to 500 in previous years and this year there are 500 registered. 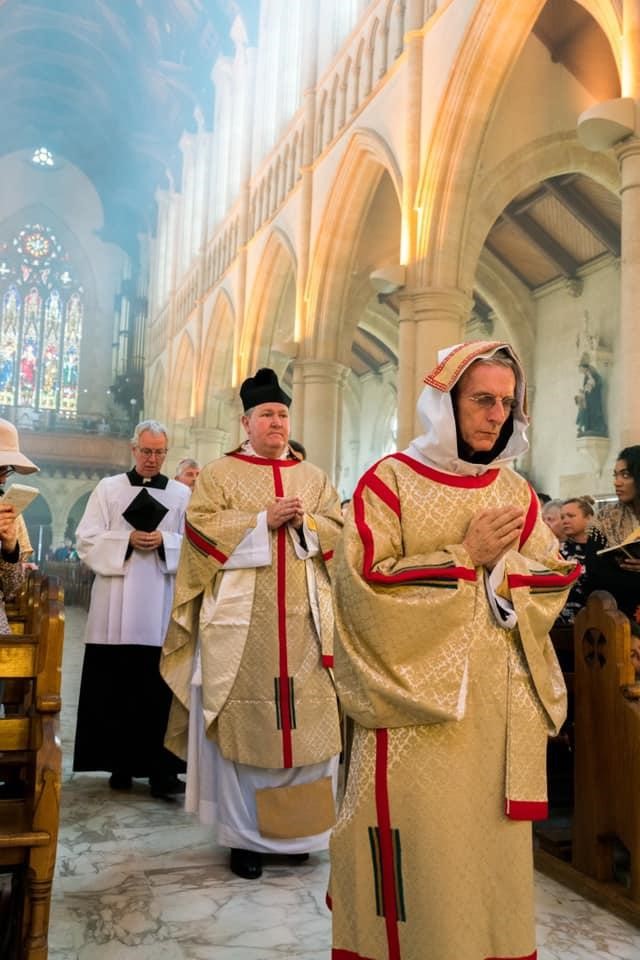 Fr Terence processing in for the closing Mass

In what ways has the pilgrimage changed over the years?

Infrastructure and logistics have become more involved with the growing numbers.  With the advent of the internet and computers (ie. digital media) we have been able to promote and advertise the event far more widely and it has also helped with organising the event more efficiently.

Much is said about prayer these days, but less about the sacrifice that should accompany it. What part does a pilgrimage play in fostering the notions of penance and sacrifice? 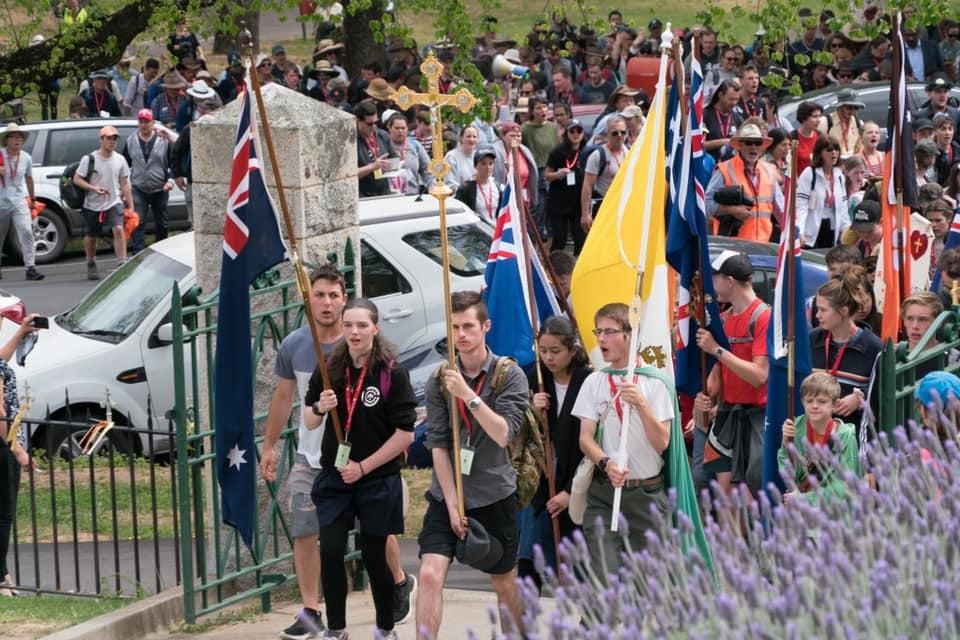 Pilgrims reaching the Cathedral after three days of walking

A walking pilgrimage over 90 km in all sorts of weather conditions together with camping (sleeping roughly) with the deprivation of home comforts organically supplies the penance. Prayer is an intimate part of the pilgrimage with pilgrims singing hymns, praying the rosary and other prayers as they walk.  Mass is said publically each day of the pilgrimage as well. The combination of these two primary elements of CREX foster both the spirit of prayer and penance.

The pilgrimage is physically challenging - why do you think it is so popular with young people and families?

In an age that is dominated by activity and physical prowess I think that the revival of traditional pilgrimages of this kind is very appealing. It provides an opportunity for people to unite under a common cause and purpose, which is to promote the beauty of the Catholic Faith and to restore the Kingship of Christ in our time as well as eternity. It is a non threatening way of introducing people to the Faith and of enhancing it among young Catholics. The event while a religious one, is also great fun with much laughter, song and friendship. Over the years we have had a number of marriages due to meeting on the pilgrimage. In fact, l am sure this is one of the attractions to the event.

Do only Traditional Catholics take part?

Certainly not. The pilgrimage is open to all people of good will. We have had any number of people attending over the years who have come with little or no faith at all. Others who have found faith or who are asking questions. Perhaps one of the richest blessings as far, as I am concerned, is the discovery of what the Catholic Faith actually is and looks like especially by those who have been educated in the Catholic school system. 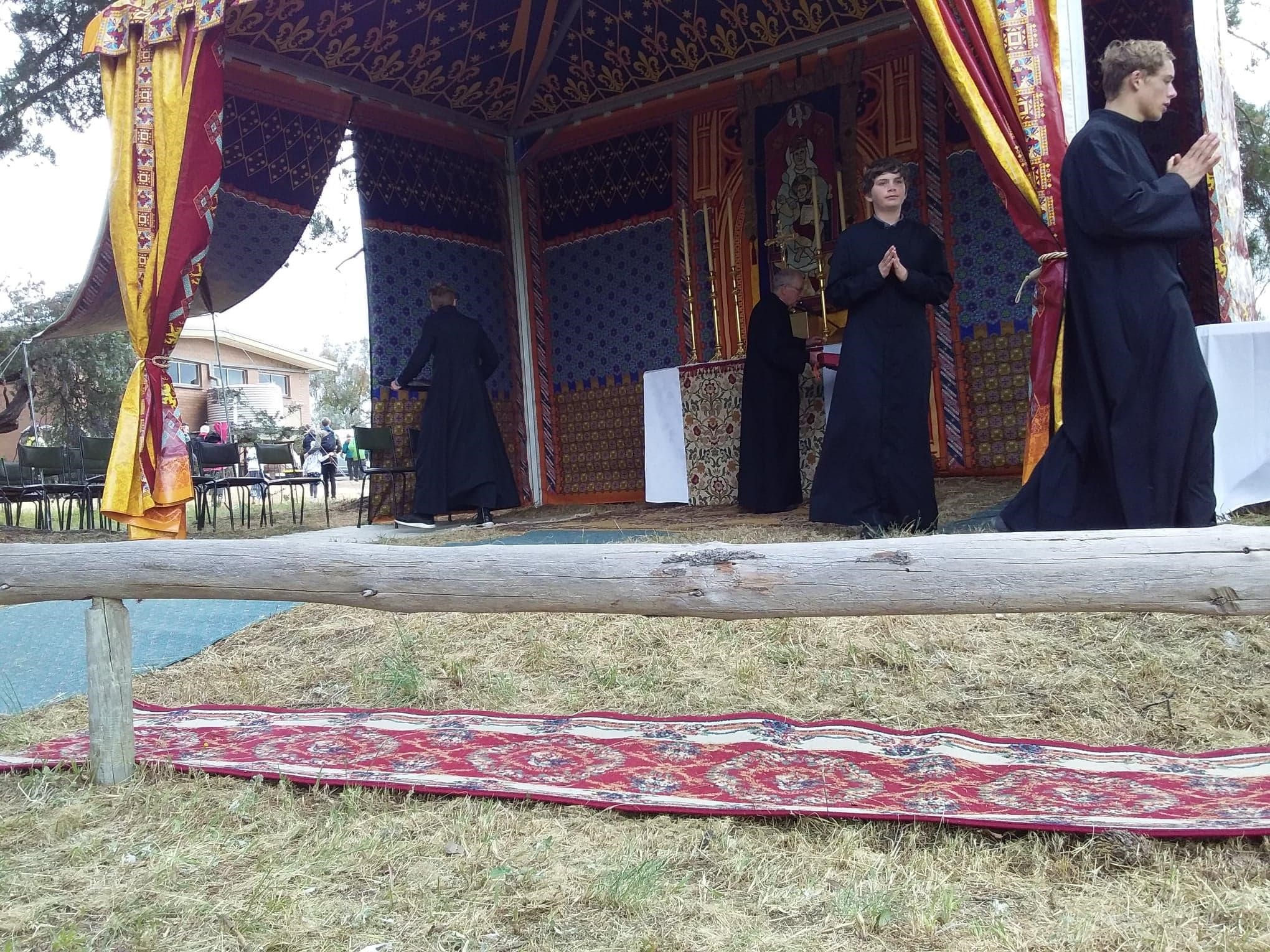 Setting up the mobile chapel for Mass on Day 2 - note the communion rails!

How big a part of the pilgrimage is the sacrament of confession?

The Sacrament plays an integral part in the pilgrimage as it should do in the life of any well formed Catholic seeking a deeper relationship with the Lord. There has been in my opinion to much focus on the sins and not enough on the grace that comes to the soul who humbles him or her self before the Lord. God is not interested in our sin, He is interested in us. The pilgrimage helps make people aware of this through the various allocutions that are provided by the clergy in attendance and indeed from the many healing stories that the pilgrims exchange with one another. I think too that when people see others going to the sacrament along the side of a road or in a paddock, it awakens the grace of their own Baptism and Confirmation and it brings them to experience after perhaps many years the healing and refreshing touch of the Lord. People have also told me that they have been very moved seeing priests kneeling before a fellow priest confessing and that this has moved them to think about returning to this beautiful gift of the Lord.

How does Christus Rex benefit the priests who take part?

For all the clergy it allows us to enjoy the company of other priests from around the country and abroad. It provides us with both human and spiritual consolation. We too need to know that our work for the Lord is bearing fruit in souls and the pilgrimage displays this on steroids.

The beautiful liturgical experience is very uplifting for all, and for the priest who must find his very existence through the relationship to the altar, the pilgrimage is very nourishing. 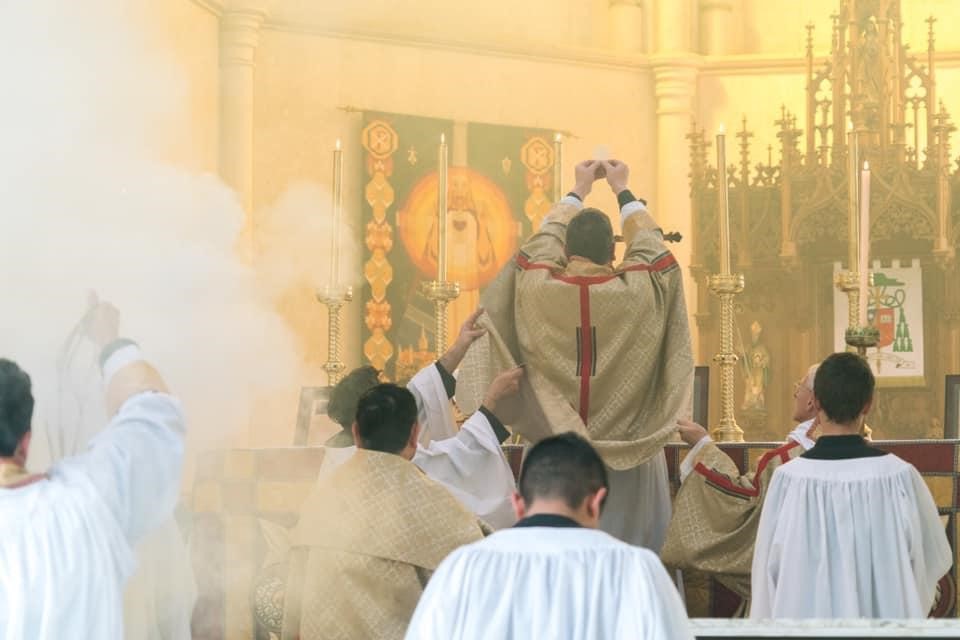 Is this kind of event becoming more important now that traditional Catholics are experiencing a kind of soft persecution within the Church?

In short, yes. To use a recent social media tagline: unite the clans. The Faith by nature unites in times of persecution, it is a source of unity and strength. The Church presently is undergoing a unique crisis, unlike ever before because this time round the attack comes from within. We have, institutionally, shot ourselves in the foot by divorcing ourselves from our own traditions, practices and customs. This has had the effect of making us absorb the secular culture around us and being absorbed by it. Traditionally, the Church has influenced, elevated and informed the culture - not the other way around. In light of this situation the Pilgrimage offers an alternative that resists the whims of this age, the "dictatorship of relativism" which presently saturates our western society.

I believe and have done so for a number of years that the pilgrimage is the single most important event happening annually in this country from a Faith perspective. It unites and enriches the faith of those involved and presents Faith and Traditional Catholic life in a very vibrant and healthy dynamic. It puts flight to the many pre conceived idea that only the old and nostalgic are interested in the traditional rites of the church and that it only attracts certain types.

‘When once men recognize, both in private and in public life, that Christ is King, society will at last receive the great blessings of real liberty, well-ordered discipline, peace and harmony.’ 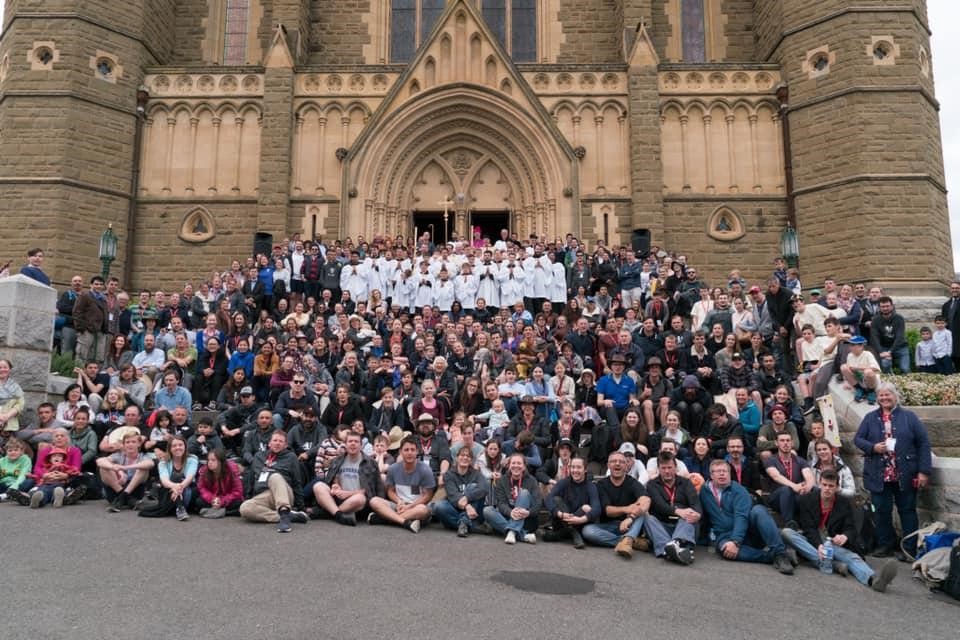 All photographs courtesy of Patrick Giam, unless otherwise stated.

[Comment Guidelines - Click to view]
The Remnant values the comments and input of our visitors. It’s no secret, however, that trolls exist, and trolls can do a lot of damage to a brand. Therefore, our comments are heavily monitored 24/7 by Remnant moderators around the country.  They have been instructed to remove demeaning, hostile, needlessly combative, racist, Christophobic comments, and streams not related to the storyline. Multiple comments from one person under a story are also discouraged. Capitalized sentences or comments will be removed (Internet shouting).
The Remnant comments sections are not designed for frequent personal blogging, on-going debates or theological or other disputes between commenters. Please understand that we pay our writers to defend The Remnant’s editorial positions. We thus acknowledge no moral obligation whatsoever to allow anyone and everyone to try to undermine our editorial policy and create a general nuisance on our website.  Therefore, Remnant moderators reserve the right to edit or remove comments, and comments do not necessarily represent the views of The Remnant.
back to top
Last modified on Wednesday, November 20, 2019
Tweet

More in this category: « THE PACHAMAMA SYNOD: A Look Back AMAZON SYNOD: Vatican I or Assisi IV? »