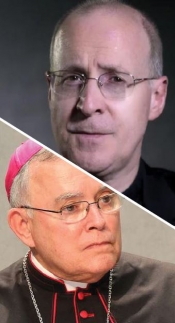 In what appears to be yet another positive aspect of the Francis Effect, Jim Martin—the pro-LGBT Jesuit activist (and Pope Francis-appointed consultant to the Vatican's Secretariat for Communications) — is apparently wearing out his welcome among some of the more conservative bishops.

America magazine's daffy editor-at-large was invited to speak at a Philadelphia university this week, which resulted in an outcry from faithful Catholics everywhere, including the Archbishop of Philadelphia.

Jim Martin spoke on September 17 and Archbishop Charles Chaput issued a statement on CatholicPhilly.com two days later, in which he pointed to one of the main problems in the post-Vatican II Church: the bishops have lost their executive veto power, if you will, over what's left of their own "Catholic" universities:

Father James Martin, S.J., spoke at St. Joseph’s University earlier this week (Tuesday, September 17) on themes related to his book Building A Bridge. And as I expected, quite a few emails arrived in my inbox questioning his teaching on same-sex related issues and urging me to prevent his appearance. A local bishop is typically unable to do that, since most Catholic universities operate under the authority of the religious community that sponsors them.

Alas, and there's the crisis in a nutshell.

"A pattern of ambiguity in [Fr. Martin’s] teachings tends to undermine his stated aims… Due to the confusion caused by his statements and activities regarding same-sex related (LGBT) issues, I find it necessary to emphasize that Father Martin does not speak with authority on behalf of the Church, and to caution the faithful about some of his claims.”

Later in the same statement, Chaput doubled down:

Father Martin has stressed that, “as a Catholic priest, I have … never challenged [the Church’s] teachings, nor will I.” But what is implied or omitted often speaks as loudly as what is actually stated, and in the current climate, incomplete truths do, in fact, present a challenge to faithful Catholic belief.

When people hear that “the Church welcomes gay people” or needs to be more “inclusive and welcoming” without also hearing the conditions of an authentically Christian life set for all persons by Jesus Christ and his Church — namely, living a life of chastity — they can easily misunderstand the nature of Christian conversion and discipleship.

For this reason, Catholic teaching always requires more than polite affirmation or pro forma agreement, particularly from those who comment publicly on matters of doctrine. Faithful Catholics who are same-sex attracted need support and encouragement in the virtue of chastity.  They deserve to hear — as all people do — the truth about human sexuality spoken clearly and confidently. Anything less lacks both mercy and justice.

… Supporters of Father Martin’s efforts will note, correctly, that several Church leaders have endorsed his work.   Those Churchmen are responsible for their words — as I am for mine, as pastor of the Church in Philadelphia.  And specifically, in that role as pastor, I want to extend the CDF’s caution to all the faithful of the Church in Philadelphia, regarding the ambiguity about same-sex related issues found throughout the statements and activities of Father James Martin.”

In further criticism, Chaput noted that, "Father Martin partners with organizations like New Ways Ministry that oppose or ignore the teaching of the Church, and he endorses events, such as PRIDE month, that cause confusion for the faithful."

Jim Martin responded with the hackneyed snark faithful Catholics have come to expect from the flamboyant gadfly. Feigning incredulity, he tweeted:

I think my main response is that it's difficult to respond to critiques that I am ‘implying’ things, when I am assiduous in my writings and talks about not challenging church teaching,”

The author of Building a Bridge tweeted on to insist that his lecture had been nothing more than a warmed over rerun of something the Vatican had approved the last time he'd trotted it out (at Dublin's World Meeting of Families).

Well of course it was. As a speechwriter, the man's someting of a one-hit wonder. And that’s the sort of the whole point. On his own, Jim Martin is just another attention-seeking guest on the Colbert Report. The story here is not Jim Martin, but rather his enablers in Rome.

In any event, we encourage our readers to send a short note of thanks to Archbishop Chaput for his courage in putting fidelity to the Church's moral theology ahead of catering to the latest celebrity priest who enjoys spitting in the face of Holy Mother Church... and telling her it's raining.

Perhaps the most direct way to thank the Archbishop is through his secretary:

Rev. Christopher C. Moriconi
215-587-3800
This email address is being protected from spambots. You need JavaScript enabled to view it.

Thank you, Your Excellency. God bless you and don't back down.

[Comment Guidelines - Click to view]
The Remnant values the comments and input of our visitors. It’s no secret, however, that trolls exist, and trolls can do a lot of damage to a brand. Therefore, our comments are heavily monitored 24/7 by Remnant moderators around the country.  They have been instructed to remove demeaning, hostile, needlessly combative, racist, Christophobic comments, and streams not related to the storyline. Multiple comments from one person under a story are also discouraged. Capitalized sentences or comments will be removed (Internet shouting).
The Remnant comments sections are not designed for frequent personal blogging, on-going debates or theological or other disputes between commenters. Please understand that we pay our writers to defend The Remnant’s editorial positions. We thus acknowledge no moral obligation whatsoever to allow anyone and everyone to try to undermine our editorial policy and create a general nuisance on our website.  Therefore, Remnant moderators reserve the right to edit or remove comments, and comments do not necessarily represent the views of The Remnant.
back to top
Last modified on Friday, September 20, 2019
Tweet