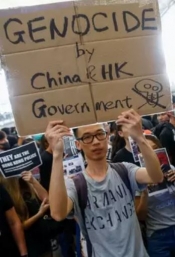 The protests in Hong Kong that are now affecting the former British colony for almost two months make us reflect on the real state of the situation, beyond the slogans of those who defend an ideology or who know China only from (although good) readings.

The people of Hong Kong, as I have said many times, do not want to have to live in the same way as people in mainland China. Hong Kong has never been democratic, but the British colonizers, in addition to guaranteeing excellent infrastructure and a well-functioning city administration, have instilled in the Chinese population that taste for certain freedoms, speech, press, religious belief and these freedoms outside the control of the central government. Democracy and freedom are not the same thing. These freedoms are very restricted in mainland China, which is very worried about foreign interference because of the fear that they might influence their own population with ideas somehow dangerous for the stability of the nation. So the violence in Hong Kong, for lack of a solution, is not decreasing but increasing.

In short, no to foreign interference and ideas that come from outside, and this is affirmed by a state governed by a party called communist. But isn't communism an idea that comes from outside? But the Chinese reality must be read in these paradoxes. And indeed in this frenzy to sinicize everything, there is precisely this need to keep everything in an indigenous landscape, which guarantees stability and that harmonious civilization proclaimed by Hu Jintao, predecessor of Xi Jinping.

The people of Hong Kong want to continue living as Chinese but outside the recent history of China. A legitimate claim in an ideal sense but difficult, if not impossible, to carry out, also because Hong Kong depends on China for some vital things, such as water supply. Certainly the people of Hong Kong are terrified of having to defend themselves before a court in mainland China. This lack of confidence in their legal system does not seem to echo in the recent document of the Holy See on the civil registration of the clergy, a document in which it is indeed recognized "the fact that there does not appear to be a uniform praxis with regard to the application of the regulations for religious affairs". In short, there is a lot of arbitrary behavior going on.

Carrie Lam will never withdraw the extradition law (she said recently that she cannot use the word “whitdrawal”), but everyone knows that it will no longer be pulled out. As everyone knows that now, at this stage, that is no longer the real problem. The problem is the relationship between China and the outside world, including the Vatican. Yes, the Holy See that now see as permissible what was considered inconsistent with Catholic church doctrine only a decade ago, to be part of the ‘patriotic Church’. 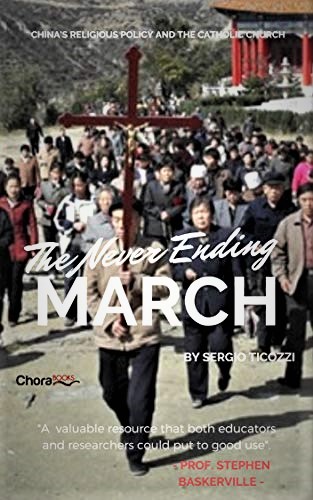 But let us say it honestly, China is really a mystery and so it is very useful to have a book like “The Never Ending March. China’s Religious Policy and the Catholic Church”) by Sergio Ticozzi, an Italian missionary that is living in Hong Kong for more than 50 years and that is considered one of the greatest experts on China and religion.

In his preface, Professor Stephen Baskerville has affirmed:

Father Sergio Ticozzi,  a prominent  Italian  missionary, has produced  an  important new  account of  the religious policies  of  the  Chinese  Communist government.    It is clear  from  his  account  that  religion has long  been  a  central  preoccupation  of  the Communist  government  and  that  it  continues  to  be  so today.    The government has long engaged  not  only in suppression of  Christian  and  other  religious beliefs but, increasingly,  in  campaigns  to  manipulate  those beliefs  and  channel  them  into  serving  the  political purposes of  the state and  Party.” Professor Baskerville go on saying: “Striking in his account  is  how  the  Chinese Communist Party continues  trying  to  make ideology function  as  a political  religion.   This has an old pedigree,  going  back to  the  personality  cult  of  Chairman  Mao Zedong (Tse-tung).    Today’s campaigns appear  to  be  more sophisticated but perhaps  equally repressive  and  futile.   Alongside his own personality cult, President  and Party General  Secretary  Xi  Jinping’s  “eight-point frugality code”  ostensibly attempts to  control “formalism,  bureaucratic  behavior,  hedonism  and extravagance” and  to  “ensure  that  workers  have  clear political  beliefs,  high  professionalism,  commitment and  discipline.”    As others have discovered,  these aims  can  be  achieved  much  more  effectively  by  simply allowing  people  to  choose  their own  religious  beliefs from  the marketplace of  ideas.”

The book was published around the time of the provisional agreement between the Holy See and Chinese government, an agreement that seems today not a so happy decision. To understand the background of the whole issue, this book of father Ticozzi is certainly fundamental. Father Ticozzi observed at the end of his book: “The main  obstacle  for  the success  of  the negotiations  seems  to  be  the different  concern  of  the two  parties:  political  concern  of  the Chinese  Foreign Ministry  that  aims  at  the  diplomatic  relations  in  order to  further  isolate  Taiwan,  in  contrast  with  the ecclesiastical  concern  of  the  Holy  See  which  wants  to avoid  a schism  in the  Church  in case  of  further  illicit ordinations  of  bishops. Consequently, a  different  understanding  of ‘normalization’ of  relations  becomes evident according  to  their  different  expectations.  This creates a  lot of  debates.  The Holy See aims  at  an  agreement primarily  on  religious  issues,  namely  freedom  of religion and  worship  for all  Catholics, end  of  the oppressive measures, a  just  way  for the appointment of Bishops,  a  proper registration of  the  clergy,  etc. However, the  most  common  understanding  of  the Chinese authorities,  of  the  majority  of news  agents and  of  the ordinary  people  underscores  the political perspective. Even Catholics,  including  several  members  of  the unofficial  Church,  look forward  for  the political solution  of  the  diplomatic  recognition  of  the  two sides, since  they, unrealistically,  hope that  it  will bring the end  of  their  troubles.” What is the situation now respect October 2018 (the time the book was released)?

It is not better, maybe even more difficult, despite the slogans coming from the official narrative. But to understand China is very difficult, and a book like this one is a very good help in doing so.

[Comment Guidelines - Click to view]
The Remnant values the comments and input of our visitors. It’s no secret, however, that trolls exist, and trolls can do a lot of damage to a brand. Therefore, our comments are heavily monitored 24/7 by Remnant moderators around the country.  They have been instructed to remove demeaning, hostile, needlessly combative, racist, Christophobic comments, and streams not related to the storyline. Multiple comments from one person under a story are also discouraged. Capitalized sentences or comments will be removed (Internet shouting).
The Remnant comments sections are not designed for frequent personal blogging, on-going debates or theological or other disputes between commenters. Please understand that we pay our writers to defend The Remnant’s editorial positions. We thus acknowledge no moral obligation whatsoever to allow anyone and everyone to try to undermine our editorial policy and create a general nuisance on our website.  Therefore, Remnant moderators reserve the right to edit or remove comments, and comments do not necessarily represent the views of The Remnant.
back to top
Last modified on Wednesday, September 4, 2019
Tweet
More in this category: « NEWSFLASH: Hong Kong Is not Berlin PRISONER OF NUANCE »