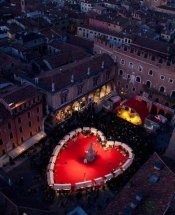 The World Congress of Families (WCF), as stated in the above website, is “a major international public event that seeks to unite and equip leaders, organizations, and families to affirm, celebrate, and defend the natural family as the only fundamental and sustainable unit of society”.

This is the first time such international event will be held in Italy, and most notably in Verona, a world-renowned city immortalized by William Shakespeare’s tragedy Romeo and Juliet. But the choice of Verona as the setting of the Congress could not have appeared more appropriate also for another reason: the pro-life and pro-family attitude shown in a public vote by the populist right-wing League led local administration.

On Thursday night, October 4th, 2018, as reported in news agency ANSA (October 5th, 2018), Verona city council approved a League motion declaring Verona "a pro-life city" and funding Catholic anti-abortion groups. During the vote, the women's group Non Una Di Meno (Not One Woman Less) protested wearing dresses from the TV adaptation of Margaret Atwood's dystopian novel The Handmaid's Tale. Verona MP Alessia Rotta of the centre-left opposition Democratic Party (PD) said "in the night Verona and its women citizens were hit by an unacceptable slap in the face". She was quoted as saying "the vote took us back to years when women died of widespread backstreet abortions". PD deputy chair Barbara Pollastrini said the vote "represents a symbolic and grave step backwards with respect to a serious and important law like the 194 (abortion law of 1975)". She urged the PD council leader, who voted with the League, to apologise for supporting the motion. The PD caucus leader Carla Padovani, who has courted controversy with traditional Catholic views and demanded to be removed from a video of Verona's first gay civil union, was unapologetic saying "life is a universal value and not one of a party". It was a vote according to her conscience, she said. Monica Cirinnà, sponsor of last year's civil unions legislation, said "I'm  disgusted" and, referring to the PD caucus leader's vote, added: "The PD must be leftwing". PD leader Maurizio Martina said "hands off the 194, there can be no ambiguity...no return to the Middle Ages".

That the above motion was still sending shockwaves across the liberal-secularist political establishment was shown beyond any reasonable doubt in late November, in connection with the United Nations-backed International Day for the Elimination of Violence against Women on 25 November. To mark this date, feminist demonstrations were held in Rome, Milan and other Italian cities, including Verona. Here also the Non Una Di Meno movement took to the streets, not only to recall the victims of feminicide and male aggression, but also demanding greater rights for women, those very rights now under threat following initiatives like the ones enacted in Verona.

This continued rabid reaction appears to be motivated by another consideration: what happened in Verona in early October is not an isolated initiative at local policy level, but the reflection of avowed convictions at regional and national policy level, in particular of at least two senior government officials of the League, deputy premier and minister of internal affairs Matteo Salvini, who is also the League head, and the minister for family and disability Lorenzo Fontana. The latter is himself from Verona, where he was also appointed deputy mayor in July 2017, an office he had to renounce after being appointed minister in June 2018. Minister Fontana is “accused” of being a hardline traditional minded Catholic (he married with the pre-Vatican ii rite in the personal parish church of Trinità dei Pellegrini catering for the traditionalist community in Rome) and is on record for having sparked a row whenever he has publicly restated his deeply-held pro-life and pro-family convictions. He is a staunch opponent of abortion, same-sex unions, stepchild adoption and pro-LGBT sex education, which he considers as a "weakening of the family", so much so that in 2018 he co-authored with Ettore Gotti Tedeschi, Catholic economist and former head of the Vatican bank IOR, the book “La culla vuota della civiltà. All'origine della crisi" (The empty cradle of civilization. At the origin of the crisis") about the risks related to the demographic winter in Italy. No surprise then if minister Fontana is said to be working on a package of measures, including tax breaks and subsidized service to support the traditional natural family based on the marriage between man and woman.

The book was prefaced by the League leader Matteo Salvini, who joined minister Fontana and other League heavyweights including the Governor of the Veneto Region, Luca Zaia, and the Mayor of Verona, Federico Sboarina, for the official launch of the WCF 2018 in the city of Romeo and Juliet. “We are proud to host the world’s families in Verona, this is the Europe that we like”, Matteo Salvini was quoted as saying during his meeting with the Italian organisers of the WCF, who on the occasion were headed by its president Brian Brown. These words were echoed by minister Fontana when he received the delegation. “The family will be for us the axis of Europe for the future”, he was also quotes as saying (cf Corriere della Sera, October 5th, 2018).

The "City of Love" declared itself Pro-life

And perhaps more than that, since these pro-lifers shared the vision that the family is to be supported for a very simple reason: it’s the hub for “a counter-revolution of good common sense and reason”, capable to provide a real deep-rooted and shared identity for the peoples of the whole of Europe and the entire world (La Verità, October 5th, 2018).

Whereas the meeting with the national government officials took place in Rome, the WCF organisers were received by the local leaders in Verona, where its major Sboarina welcomed them saying that the congress “will be the occasion to re-proclaim values dear to me and that are part of my administration’s programme…Verona is proud to welcome the thousand people participating in the Congress, but most of all of becoming a laboratory of ideas and initiatives promoting the defence of life, from conception to natural death, and of family in the respect of the valuable diversities between man and woman”. For his part, while expressing his thanks and appreciation for the warm welcome received, Brian Brown pledged to make all he could for the upcoming WCF in Verona to become a watershed event, with the hope for “Italy to become again a beacon of civilization for Europe and the whole world”, he was quoted as saying. (in L’Arena, October 4th, 2018).

As reported in La Verità (cit.), Brown is convinced that a new wind is blowing from Italy, a wind which is changing also Western Europe. And probably not only Western Europe. The latest editions of the WCF took place in Eastern Europe, with the 2018 edition being held 13 - 16 September in the capital city of Moldova, Chisinau, where the WCF proceedings saw also the participation of Patriarch Kirill of Moscow and All Russia and the Vatican Secretary of State, Cardinal Pietro Parolin.

To know more about the WCF and its programme in Verona:

[Comment Guidelines - Click to view]
The Remnant values the comments and input of our visitors. It’s no secret, however, that trolls exist, and trolls can do a lot of damage to a brand. Therefore, our comments are heavily monitored 24/7 by Remnant moderators around the country.  They have been instructed to remove demeaning, hostile, needlessly combative, racist, Christophobic comments, and streams not related to the storyline. Multiple comments from one person under a story are also discouraged. Capitalized sentences or comments will be removed (Internet shouting).
The Remnant comments sections are not designed for frequent personal blogging, on-going debates or theological or other disputes between commenters. Please understand that we pay our writers to defend The Remnant’s editorial positions. We thus acknowledge no moral obligation whatsoever to allow anyone and everyone to try to undermine our editorial policy and create a general nuisance on our website.  Therefore, Remnant moderators reserve the right to edit or remove comments, and comments do not necessarily represent the views of The Remnant.
back to top
Last modified on Saturday, March 23, 2019
Tweet

More in this category: « THIS LENT: Explore the World of Fisheaters St. Gabriel the Archangel, March 24 »