As Deputy Assistant Vice-Pope, and one who might have gone to the top if it hadn't been for the St Gallen mob - er, I mean the Holy Spirit - I am writing to you about your latest statements spilling the Faggioli about Pope Francis (a little Vatican joke, there. Beans, get it? Oh, suit yourself.)

I find your current attitude incomprehensible and extremely troubling, as it makes the Pope, Cardinals and Bishops look like complete fools. Which nobody ever suspected before. Remember that criticising the Holy Father is blasphemy (CCC 9745, added today), and far worse than, say, criticising Jesus, who did not have the advantages of reading Amoris Laetitia.

How dare you say that Pope Benedict - whoever he may be - put sanctions on Uncle Ted McCarrick? The fact is that when Pope Francis took over he found Ted lying in chains in a deep dungeon, deprived of even the humblest seminarian for companionship. Being a merciful as well as humble pope, he promptly released him, saying "Go and sin some more" (John 8:11). Uncle Ted was promptly made the Vatican's Special Envoy to Vulnerable Seminarians, and how do you dare criticise the Pope's decision?

Of course, Pope Francis makes prudential judgements, and he is not infallible, except when he chooses to be. And he does now. 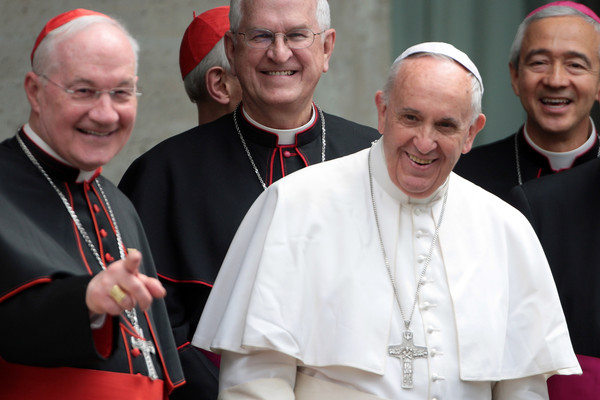 Dear pontifical representative emeritus, I tell you frankly that to accuse Pope Francis of having covered-up knowingly the case of an alleged sexual predator is unbelievable and without foundation. He didn't bother mentioning the case to anyone, but that is not the same thing at all.

I have the privilege of having long meetings with Pope Francis every week to discuss the appointment of bishops and the problems that affect their governance. I know very well how he treats persons and problems: with great charity, mercy, attentiveness and seriousness, as you too have experienced. (Hang on a minute, Eccles, that's a real quotation.)

We must recognise Pope Francis for what he is, a true shepherd, a martyr, a saint, a resolute and compassionate father, a prophetic grace for the Church and for the world; yes, a humble man who gave his last euro to a dying beggar, and didn't ask for it back until later. He is incapable of doing wrong, and I can only conclude that your revelations are part of a plot to incriminate him for things he may or may not have done; until he agrees to a DNA test we can't be sure, can we?

Don't think you'll get away with this, Viganò. We know where you live. Well, we don't, but when we find you, you'll wish you'd taken out extra accident insurance.

Your loving brother in Christ,

Remnant Editor's Note: This is just so exquisitely funny that we flat out stole it from the blog, "Eccles is saved".  We searched in vain for contact info in order to ask permission but, having found none, we can only now ask forgiveness from Eccles and assure him that we'll take it down immediately if our theft is offensive. Either way, thanks a million, Eccles, for the hearty belly laugh, and do let us know if you're ever looking for other writing gigs. The one thing these characters cannot handle is mockery, and yet never before have churchmen been more richly deserving of it. Well done indeed!  - MJM

[Comment Guidelines - Click to view]
The Remnant values the comments and input of our visitors. It’s no secret, however, that trolls exist, and trolls can do a lot of damage to a brand. Therefore, our comments are heavily monitored 24/7 by Remnant moderators around the country.  They have been instructed to remove demeaning, hostile, needlessly combative, racist, Christophobic comments, and streams not related to the storyline. Multiple comments from one person under a story are also discouraged. Capitalized sentences or comments will be removed (Internet shouting).
The Remnant comments sections are not designed for frequent personal blogging, on-going debates or theological or other disputes between commenters. Please understand that we pay our writers to defend The Remnant’s editorial positions. We thus acknowledge no moral obligation whatsoever to allow anyone and everyone to try to undermine our editorial policy and create a general nuisance on our website.  Therefore, Remnant moderators reserve the right to edit or remove comments, and comments do not necessarily represent the views of The Remnant.
back to top
Last modified on Thursday, October 11, 2018
Tweet
More in this category: « As Christine Ford’s Fake Rape Story Collapses, Another Hit-and-Run Accuser Tries to Flee the Scene SAINT Paul VI: Pope to Canonize Revolution of Vatican II »