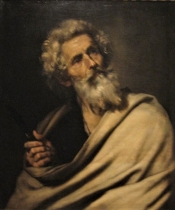 Today is the Feast of St. Bartholomew, which I hadn't realized until I arrived (late, as usual) to Mass this morning. Bartholomewmas is the occasion of my favorite sermon by Bl. John Henry Cardinal Newman.

First delivered when he was still an Anglican, it's titled “Guilelessness”, and draws from today's Gospel reading. The text is only available in print, but let me share with you a particularly striking excerpt:

"Now, from what occurred in this interview, we gain some insight into St. Bartholomew’s character. Our Lord said of him “Behold an Israelite in whom there is no guile!” and it appears moreover, as if, before Philip called him to come to Christ, he was engaged in meditation or prayer, in the privacy a fig tree’s shade afforded him. And this, it seems, was the life of one who was destined to act the busy part of an Apostle; quietness without, guilelessness within. This was the tranquil preparation for great dangers and sufferings! We see who make the most heroic Christians, and are the most honored by Christ!

"An even, unvaried life is the lot of most men, in spite of occasional troubles or other accidents; and we are apt to despise it, and to get tired of it, and to long to see the world – or, at all events, we think such a life affords no great opportunity for religious obedience. To rise up, and go through the same duties, and then to rest again, day after day – to pass week after week, beginning with God’s service on Sunday, and then to our worldly tasks, so to continue till year follows year, and we gradually get old – an unvaried life like this is apt to seem unprofitable to us when we dwell upon the thought of it. May indeed there are, we do not think at all, but live in their round of employments, without care about God and religion, driven on by the natural course of things in a dull irrational way like the beasts that perish.

"But when a man begins to feel he has a soul, and a work to do, and a reward to be gained, greater or less, according as he improves the talents committed to him, then he is naturally tempted to be anxious from his very wish to be saved, and he says, “What must I do to please God?” And sometimes he is led to think that he ought to be useful on a large scale, and goes out of his line of life, that he may be doing something worth doing, as he considers it. Here we have the history of St. Bartholomew and the other Apostles to recall us to ourselves, and to assure us that we need not give up our usual manner of life, in order to serve God; that the most humble and quietest station is acceptable to Him, if improved duly – nay, affords means for maturing the highest Christian character, even that of an Apostle. Bartholomew read the Scriptures and prayed to God; and thus was trained at length to give up his life for Christ, when He demanded it." 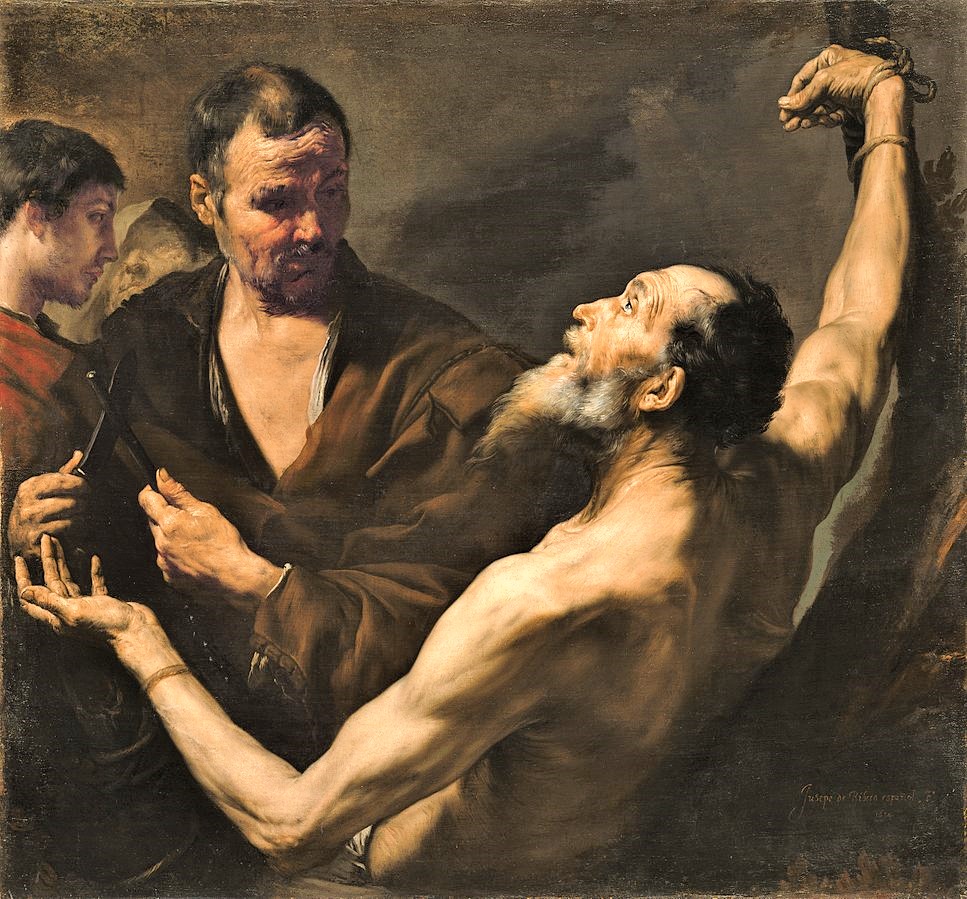 The Martyrdom of St. Bartholomew. The saint was flayed alive, hung upside-down, then beheaded.

I’m reminded of a passage from Fr. Vincent McNabb OP’s Nazareth or Social Chaos, where he notices that Christ took care not to disrupt the “even, unvaried life” of the Nazarenes – the “humble and quiet station” of his townsfolk:

The Word made flesh was not minded to disturb the Divine order which made land-work the primary duty and need of beings demanding daily bread to keep them in being. It was only from work of secondary need such as fishing or of still less need such as tax-collecting that Jesus chose His disciples. Land-work was an institution so indispensable and divine that from it he took no workers, but only the wisdom of parables.

Nazareth was always a highland hamlet, whose every stone was hallowed by thirty years of God’s redemptive love. Gradually our eyes begin to see this hamlet as one of the necessities – one of those conditional necessities, to use a phrase of the Dumb Ox of Aquin – of the enterprise of Redeption. For Nazareth was the Unit of human society. It was a family of families gathered together in aid and defense of life. Within its circuit dwelt the little self-sufficing group of land-workers and hand-workers.

The primary craft of land-work and the secondary yet necessary crafts of hand-work were there working together in the primary Co-operative Group. All the sanctities and social necessities of property, chastity, and authority were there in their natural soil and setting. If, then, the Son of God made Nazareth his earthly home and took it as his earthly title, it was because He, the Redeemer and the Beginning, who came to make all things new, realized that in a Nazareth alone could be the beginning of redemption.

For this reason you – my beloved pupil – and I, your unworthy teacher, have come to feel Nazareth calling us; indeed, crying out with a loud Calvary shout to us. The theme of that unceasing Nazareth cry is: “Come back, not to Ur or Memphis or Jerusalem, but to Nazareth, lest you prepare for another Golgotha.

This great Englishman couldn’t have forgotten his nation’s anthem, which asks:

And did those feet in ancient time
Walk upon Englands mountains green:
And was the holy Lamb of God,
On Englands pleasant pastures seen!

And did the Countenance Divine,
Shine forth upon our clouded hills?
And was Jerusalem builded here,
Among these dark Satanic Mills?

Certainly not! The New Jerusalem isn’t England, a bit player in the Protestant revolution and the principal actor in the capitalist revolution. The New Jerusalem is Heaven itself, to which our priests traditionally orient themselves when they call Our Lord down to the altar. We can’t build a mighty Jerusalem on this earth, but we ought to strive to build a humble Nazareth. For Nazareth is the nearest port to Jerusalem; and, when the modest and steady toil of this life is over, we board a simple wooden barque, at last crossing over to Christ’s everlasting Kingdom.

You and I – we hear the call of Nazareth, even over the lapping waves of that whale-road to Zion. Our careers are complicated, and our lives are chaotic, yet God is simplicity Itself. We envy those who take their livelihood from the soil and the sea, which is the natural and humane order of the economy – the economy Our Lord was not minded to disturb. We do so because we understand that the Nazareans’ wealth was, in fact, greater than that of their Roman oppressors. This speaks to the nature of wealth, which the Vicomte de Bonald laid out so ably in his rejoinder to Adam Smith’s The Wealth of Nations:

Wealth, taken in a general and philosophical sense, is the means of existence and conservation; and opes, in the Latin tongue, signifies both wealth and strength. For the individual – a physical being – these means are material wealth, the produce of soil and of industry, or the sign that represents all these goods and services to procure them.

For society – a moral being – the means of existence and duration are moral riches, and the forces of conservation are, for the domestic society, morals, and for the public society, laws. Yes, society is a moral body: Religion is its health, the monarchy its strength, and the virtues its possessions. War, disease, and famine cannot destroy it, yet a book suffices to cause a revolution.

The Romans accumulated greater riches through industry and conquest, which inevitably led to their ruin. The Jews of Nazareth accumulated greater wealth through obedience to God’s law, and were content that such obedience should produce only a “highland hamlet”. It stands to this day. Their profit was greater because they weighed their prosperity in moral rather than material terms.

Morals, yes – but which morals? Those of St. Bartholomew – the virtues attendant on guilelessness – whose sum Bl. Cardinal Newman finds in Psalm 14:

Lord, who shall dwell in thy tabernacle? or who shall rest in thy holy hill?

He that walketh without blemish, and worketh justice:

He that speaketh truth in his heart, who hath not used deceit in his tongue: Nor hath done evil to his neighbour: nor taken up a reproach against his neighbours.

In his sight the malignant is brought to nothing: but he glorifieth them that fear the Lord. He that sweareth to his neighbour, and deceiveth not;

He that hath not put out his money to usury, nor taken bribes against the innocent: He that doth these things shall not be moved for ever.

We see that the virtues conducive to salvation are also those conducive to a sound (if modest) economy. And how could it be otherwise? God is the Creator of the Universe and the author of natural law, moral and social as well as physical. To take an example from the psalm, the usurer can no more expect to profit from his sin than Newton could expect his apple to fall up. He might accumulate a bit of wealth for a little while, just as Newton could toss his apple into the air. But the apple will fall back to the earth; and the edifice of usurious capitalism, like the Roman Empire, will collapse under its own weight.

And what does it matter if we have only those material things necessary for “the means of our existence”? Our Lord lived his entire life in such poverty. Indeed, St. Louis Marie de Montfort recommends that, as we meditate – meditation being necessary for the cultivation of guilelessness, as we see in the life of St. Bartholomew – on the third joyful mystery, we ask Our Lady for “detachment from worldly things, contempt of riches and a love of poverty.”

Let England be the New Jerusalem, but let us work in our own lives to build the New Nazareth. Hold riches in contempt; restore our nation to her true and only wealth. And, when you cross those calm waters to the New Jerusalem, may you hear Christ exclaim: “Behold an American in whom there is no guile!” 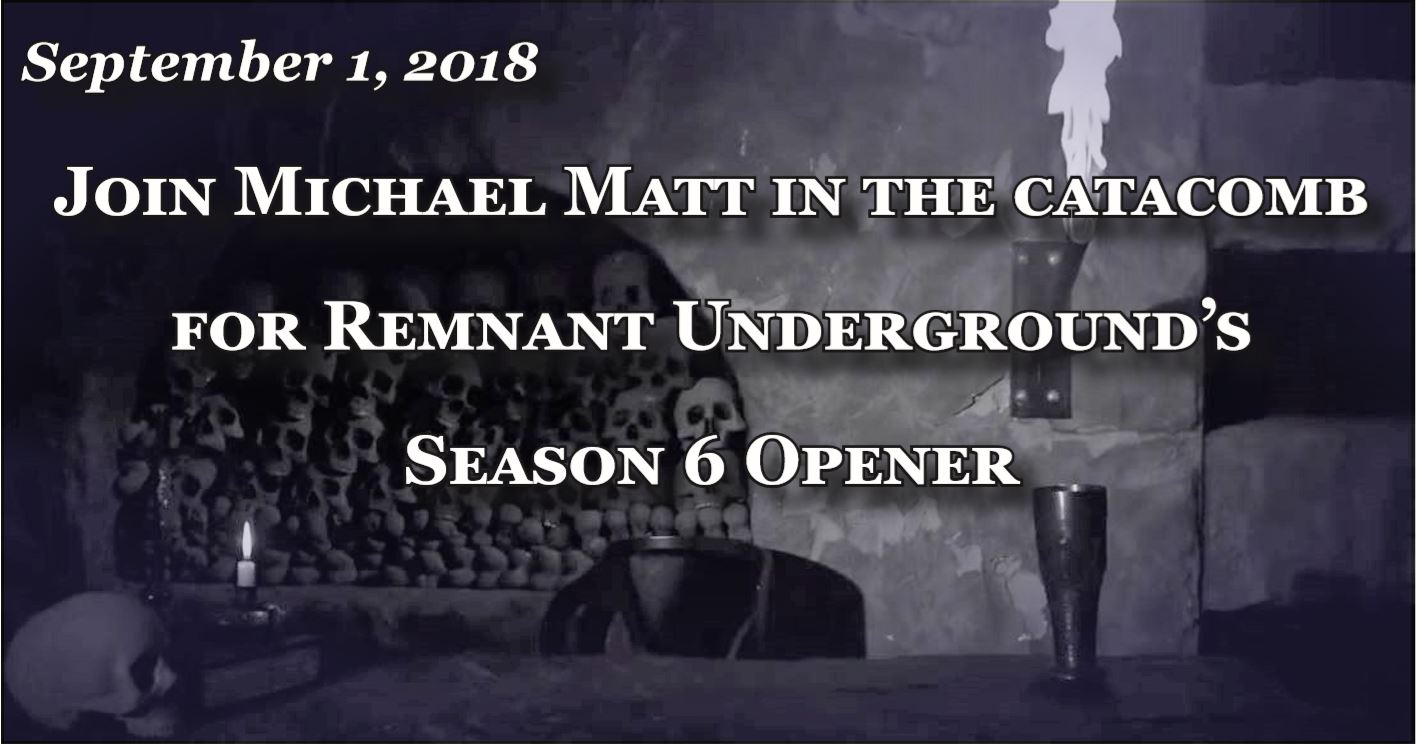 [Comment Guidelines - Click to view]
The Remnant values the comments and input of our visitors. It’s no secret, however, that trolls exist, and trolls can do a lot of damage to a brand. Therefore, our comments are heavily monitored 24/7 by Remnant moderators around the country.  They have been instructed to remove demeaning, hostile, needlessly combative, racist, Christophobic comments, and streams not related to the storyline. Multiple comments from one person under a story are also discouraged. Capitalized sentences or comments will be removed (Internet shouting).
The Remnant comments sections are not designed for frequent personal blogging, on-going debates or theological or other disputes between commenters. Please understand that we pay our writers to defend The Remnant’s editorial positions. We thus acknowledge no moral obligation whatsoever to allow anyone and everyone to try to undermine our editorial policy and create a general nuisance on our website.  Therefore, Remnant moderators reserve the right to edit or remove comments, and comments do not necessarily represent the views of The Remnant.
Last modified on Friday, August 24, 2018