On November 14, 1996, Cardinal Joseph Bernardin passed from this world into the next. The loss of Cardinal Bernardin in the mid-90s, as John Paul II’s popularity was reaching its zenith, marked not simply the end of a powerful man, but the end of an era. As the more politically conservative New York Cardinal Francis Spellman was the generation before, Cardinal Bernardin was the most powerful man during the heyday of the Vatican II aggiornamento in the Catholic Church in America.

In many ways, in addition to being the rainmaker for American bishops in the 1980s, Joseph Bernardin was a brilliant manipulator of public opinion, who was able to overcome a lifetime of accusations of misconduct--directed both against His imminence and a slew of personal friends and priests under Bernardin’s care.

However, Bernardin’s most successful coup was his “seamless garment” or “consistent ethic of life” argument, encapsulated in his famous 1983 Gannon Lecture at Fordham University. From the blueprint of his speech, in which he folded the horrific issue of abortion into a catalogue of other questionable “life issues,” Bernardin was simultaneously able to sabotage the prolife movement as well as ensure continued Catholic voting for prochoice Democrats who advocated for higher minimum wages, arms control, or universal health care.

One of the key issues in the seamless garment ethic that has grown in prominence, as Democrats have become less interested in being antiwar and have largely abandoned the ethnic Catholic working class, is immigration.

Indeed, immigration is a slam dunk for liberal Catholics, which, as Bill Clinton’s civil rights efforts did during the Lewinsky Affair, provide a “balance” to their endorsement of infanticide and sexual degeneracy.

Liberal Catholics can make the argument that the Holy Family, who briefly moved from Roman Palestine to Roman Egypt (and then went back home), are similar in character to the now millions of immigrants who have forced their way into the West.

In the minds of seamless garment Catholics, support for illegal immigrants even appears to have a Biblical precedent. 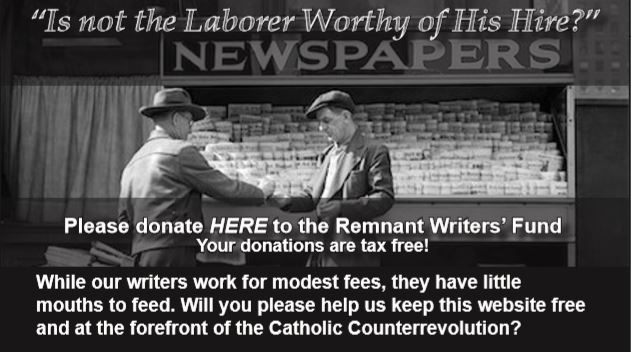 While they have to perform tortuous mental gymnastics to explain away the repeated condemnation of homosexuality in the Bible, liberal Catholics can draw from a host of statements in the Bible in which Our Lord calls for care of the sick and outcast and then proudly trumpet that these statements translate to open border (at least for Western countries).

In fact, our friend, Fr. James Martin, himself a veritable reincarnation of Cardinal Bernardin’s method and ethos, in addition to appearing on MSNBC , has recently resurrected a video the Jesuit priest created last year during the height of the migrant invasion of Europe.

In his video, Fr. Martin’s argument is, in effect, that a literal and faithful reading of the Bible reveals that a Christian is obligated to allow any number of migrants and refugees to come into his or her country, and to quote Fr. Martin’s paraphrase of the Bible, a Christian is forced to “answer any need that a migrant or refugee has” regardless of the effect upon the common good of the host country.

Fr. Martin’s selective quotations and garbling of Holy Scripture are typical not only of left wing clergy, carrying on the Bernardin tradition, but also a new generation of neoconservative clerics who attempt to get the Bible to service political policies that are entirely contrary to the tradition of the Church.

The proper method of scriptural exegesis is to look first at how the Church traditionally has interpreted a specific passage of scripture and see if one’s own reading is consonant with the Church’s tradition.

The issue of what the Bible says about immigration has been broached in the past. In fact, the Universal Doctor of the Catholic Church, St. Thomas Aquinas, in the Summa Theologica, tackles some of the very same Old Testament passages that Fr. James Martin marshals in support of welcoming refugees and migrants.

In Article 3 of Question 105 of the First Part of the Second Part of the Summa, St. Thomas asks, “Whether the judicial precepts regarding foreigners [in the Old Law] were framed in a suitable manner?

St. Thomas’s answer is, of course, yes, and the Angelic doctor explains that the Bible does not argue for Fr. Martin’s blind acceptance of immigrants.

St. Thomas explains that in the Old Law only those nations that “had close relations with the Jews” were allowed to settle among the Hebrews, and, even then, those people had to wait for three years before being “admitted to the fellowship of the people” (S.T., I-II, q. 105, a. 3). Moreover, there were some tribes such as the Ammonites and Moabites who had “hostile relations” with the Hebrews” and thus “were never to be admitted to citizenship” (S.T., I-II, q. 105, a. 3). Finally, the Angelic Doctor explains that there are some people such as the Amalekites who “had no fellowship of kindred” with the Hebrews and “were to be held as foes in perpetuity” (S.T., I-II, q. 105, a. 3). Aquinas’s statements here could not be any clearer: There are some people, due to religious and even ethnic reasons, that cannot assimilate to another people’s culture or political community.

Thus, not simply St. Thomas’s thirteenth century commentary, but even the Bible itself says that one is not obligated to welcome immigrants if they are incompatible with a nation’s character.

Something is not right here.

Fr. James Martin is either ignorant of the words of Sacred Scripture and the Church’s traditional teaching, or he is being dishonest.

Maybe he is simply overcome with kindness and love for refugees the world over.

Yet, perhaps, the leadership of the Church in America has other motivations for welcoming in millions of immigrants, many of whom appear incompatible with the American people and the American way of life.

This petty love of mammon, in the end, leaves us with an interesting thought: Is it just a coincidence that Fr. James Martin is carted around national television to cheer on every George Soros-approved attack on the natural law and upon American national sovereignty?

Are there any other “tit for tat” arrangements Catholic leadership both in America and aboard has with governmental organizations or NGOs in which money (and perhaps blackmail) is exchanged for Catholic support for globalist policies?

Is there something else going on here?

[Comment Guidelines - Click to view]
The Remnant values the comments and input of our visitors. It’s no secret, however, that trolls exist, and trolls can do a lot of damage to a brand. Therefore, our comments are heavily monitored 24/7 by Remnant moderators around the country.  They have been instructed to remove demeaning, hostile, needlessly combative, racist, Christophobic comments, and streams not related to the storyline. Multiple comments from one person under a story are also discouraged. Capitalized sentences or comments will be removed (Internet shouting).
The Remnant comments sections are not designed for frequent personal blogging, on-going debates or theological or other disputes between commenters. Please understand that we pay our writers to defend The Remnant’s editorial positions. We thus acknowledge no moral obligation whatsoever to allow anyone and everyone to try to undermine our editorial policy and create a general nuisance on our website.  Therefore, Remnant moderators reserve the right to edit or remove comments, and comments do not necessarily represent the views of The Remnant.
back to top
Read 5171 times Last modified on Saturday, June 23, 2018
Tweet

More in this category: « New from RTV...St Anthony of Padua, June 13 Major Win for California's Right-to-Life »