University of St. Thomas: Catholic in Name Only

Part of a recent discussion at Catholic Parents Online included the following comment about changes in the works at the venerable University of St. Thomas here in St. Paul:

The faculty at UST is developing a new core curriculum. The proposal up for discussion has the THEOLOGY requirements dropped from 3 to 1 and PHILOSOPHY from 2 to 1, with a third course to be taken from either. An amendment introduced last week in the Faculty Senate to change these requirements to 2 THEOLOGY and 2 PHILOSOPHY was overwhelmingly defeated. There remains a logical possibility that this could be changed before the package is voted on, but the chances of that happening appear to be vanishingly small.

An attempt to get the English requirement back to 2 after being reduced to 1 was also defeated. It's a new era at University of St. Thomas.

As Theology and Philosophy are gradually purged from the “Catholic” campus, diversity is on the upswing. For example, the University of St. Thomas now has its own Islamic prayer rooms, as well as ritual washing stations for observant Muslims.

The prayer rooms reflect the surging number of students from Middle Eastern countries flocking to the Catholic university, now that there’s nothing particularly Catholic about the place anymore. Minnesota's largest private university has dramatically decreased the number of Catholic priests on campus, gotten rid of the Archbishop at the top of their board, and even hired its first woman president ever—a Left-leaning liberal, Dr. Julie Sullivan.

But look how diverse! 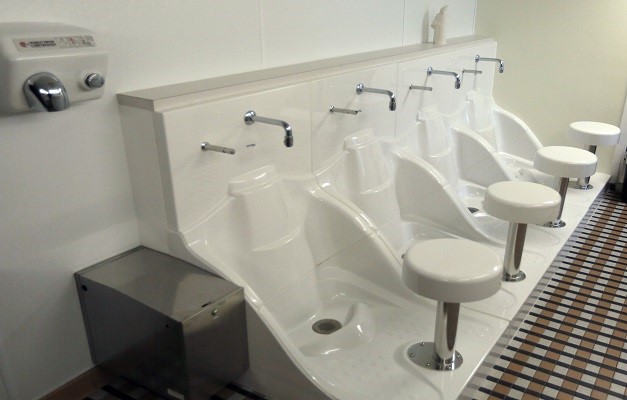 Welcome to the LGBTQ+ and Allies Committee

In addition, back in October of 2009 an ad hoc committee formed on campus comprised of faculty, staff and students dedicated to improving the climate for LGBTQ persons on campus, with support from the Office of the President/Affirmative Action, the Luann Dummer Center for Women, the Office of Student Affairs, the University Advocates for Women and Equity, and the Office of Institutional Diversity.

"Our committee was formed through invitations and nominations solicited from various deans and administrative leaders on campus, and we have continued to welcome new members who have expressed interest. Our initial training was done through the Minnesota GLBTA Campus Alliance www.mncampusalliance.org."

UST President Dr. Julie Sullivan showed her support for our effort by positively gushing in her convocation address on September 3, 2013:

“The planning and climate surveys reflected concern about a welcoming and supportive attitude to lesbian, gay, bisexual, and transgender persons in our community.  It pains me to think that a gay student, staff or faculty member would ever feel unwelcome or a need to ‘hide’ at St. Thomas.  As Pope Francis reminds us, we are not called to judge.  We are called to love and support everyone in our community regardless of their sexual orientation. And, I might add, regardless of the gender of their spouse.”

So much for Catholic moral theology, especially when it comes to the Church's infallible teaching on marriage between one man and one woman. So much for Pope John Paul's Familiaris Consortio and, for that matter, so much for the Catechism of the Catholic Church's condemnation of homosexual acts.

As the St. Thomas University—the school from which the founder of The Remnant, Walter L. Matt, graduated in 1940, by the way—rapidly becomes Catholic in name only, it’s no wonder that smaller Catholic alternatives are booming all around the country:

While the University has always had strong enrollment numbers, the increase this year in interested students is unprecedented. According to its news bulletin, “the University of Mary has 33 percent more commitments from incoming freshmen than at this time last year, along with a 27 percent increase in applications.” As Chip Hinton, Director of Undergraduate Admissions, told me in a recent interview, “This is borderline astonishing. We’re still getting more and more students from North Dakota, more students from the rest of the nation. More students are finding us through The Newman Guide. …Enrollment from Minnesota has increased 450 percent since 2009.” This remarkable boom in enrollment overall can only be attributed to the wonderful work that the University is doing in promoting Catholic, higher education. READ MORE HERE

And the University of St. Thomas?  It's apparently not interested in being Catholic anymore. And as this is patently obvious to all, maybe the University should just drop any affiliation to a Church whose teachings they obviously reject.

Whether that ever happens or not, more and more faithful Catholics have had enough. They are pulling their support from the venerable institution which is now in the hands of anti-Catholics, and instead giving it to the small start-up Catholic colleges and universities around the country that are being run by men and women who are faithful to the promises of their baptism and proud of their Catholic identity.

Christendom College comes to mind, Franciscan University, the University of Mary, Thomas Aquinas College, Ave Maria, Wyoming Catholic and a half-dozen others. These are the future of Catholic institutions of higher learning in America. Why? Because they’re Catholic whereas the University of St. Thomas is not—whether the progressives running the place know enough about the Catholic Faith to realize it or not.

They have our buildings...but we have kept the Faith.

[Comment Guidelines - Click to view]
The Remnant values the comments and input of our visitors. It’s no secret, however, that trolls exist, and trolls can do a lot of damage to a brand. Therefore, our comments are heavily monitored 24/7 by Remnant moderators around the country.  They have been instructed to remove demeaning, hostile, needlessly combative, racist, Christophobic comments, and streams not related to the storyline. Multiple comments from one person under a story are also discouraged. Capitalized sentences or comments will be removed (Internet shouting).
The Remnant comments sections are not designed for frequent personal blogging, on-going debates or theological or other disputes between commenters. Please understand that we pay our writers to defend The Remnant’s editorial positions. We thus acknowledge no moral obligation whatsoever to allow anyone and everyone to try to undermine our editorial policy and create a general nuisance on our website.  Therefore, Remnant moderators reserve the right to edit or remove comments, and comments do not necessarily represent the views of The Remnant.
back to top
Last modified on Wednesday, March 21, 2018
Tweet