Another One Bites the Dust: The Dalai Lama Abandons Marriage 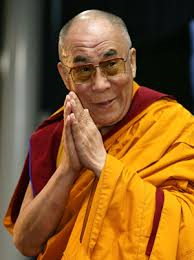 Late last week the Dalai Lama flip flopped, I mean, evolved on the marriage question. During an interview with the semi-retired Larry King, the Tibetan Buddhist leader said, “If two people – a couple – really feel that way is more practical, more sort of satisfaction, both sides fully agree, then OK.”

The Dalai Lama qualified his remarks by stating Buddhists are not to engage in homosexual behavior, but “for a non-believer, that is up to them.”

“[T]here are different forms of sex – so long as it is safe, OK, and if they fully agree, OK.”

Sadly, this man’s noxious arguments encapsulate the way the world thinks about pretty much everything these days. If you “feel” something is satisfying to you, then, go ahead and do it. As long as both parties “fully agree” to something then no one else has a right to tell them they are wrong.

It goes without saying that this sort of secular aggiornamento does not emanate from the will of the one true God.

Still, political and religious leaders across the globe are intent on ramming it down our throats, primarily with the help of the United Nations.

Indeed, not a day goes by without some governor or judge reminding us about how close-minded mankind’s understanding of homosexuality has been since, well, the dawn of time.

The effect of all this on Catholics, when coupled with limp-wrist leadership and confusing rhetoric from the Vatican on homosexuality and civil unions, is that they fall prey to thinking that the world, and not the Church, is actually right.

Statistics bear this out.

Over the past several weeks, two important polls were released; one by the Public Religion Research Institute (PRRI) and another by Pew Research.

Pew’s research discovered that roughly 80% of Catholics think the Church should allow the laity to use birth control, while nearly seven-in-ten say priests should be allowed to get married and women should be able to become priests.

Given the way the Catholic Supreme Court Justice Anthony Kennedy helped overturn DOMA, it’s not hard to believe, as New York Times columnist Ross Douthat recently noted, that “the Supreme Court will be forced to acknowledge the logic of its own jurisprudence on same-sex marriage and redefine marriage to include gay couples in all 50 states. Once this happens,” he adds, “the national debate essentially will be finished but the country will remain divided, with a substantial minority of Americans, most of them religious, still committed to the older view of marriage.”

Catholics, whether they like it or not, have been boxed in a ghetto in the United States, and no matter how hard conservatives urge God-fearing citizens to lock arms and get involved in politics, the modern world no longer has room for the teachings of the Roman Catholic Church. I think Douthat would agree.

And what do the princes of the Church have to say about all this? That we need to focus on giving Communion to divorced and remarried Catholics.

Welcome to the new springtime, folks.

Published in Fetzen Fliegen
back to top
Last modified on Wednesday, March 12, 2014
Tweet
More in this category: « Ecclesiastical Pornography? US War Hawks Circle the Ukraine »