Synod 2018: How Idolatry of the Young Will Further the Tyranny of the Old Featured

Written by  Christopher A. Ferrara
Rate this item
(41 votes) 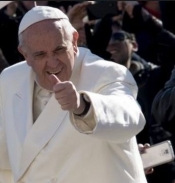 That the Church is in the destructive grip of a neo-Modernist dictatorship under an octogenarian Jesuit Pope and his cohort of aged progressive friends is no longer reasonably arguable. In this all but apocalyptic situation, the only issue now is how far the regime will be able to go in realizing the megalomaniacal Bergoglian vision of Evangelii Gaudium: “I dream of a ‘missionary option’, that is, a missionary impulse capable of transforming everything, so that the Church’s customs, ways of doing things, times and schedules, language and structures can be suitably channeled for the evangelization of today’s world rather than for her self-preservation [!].”

As the acceptance of situation ethics respecting intrinsically evil acts proposed by Amoris Laetitia (AL) threatens “to destroy the entire moral teaching of the Church” as a matter of “pure logic,” to quote the renowned philosopher Josef Siefert, the Bergoglian dictatorship is preparing its next assault on what is left of the Church’s ramparts: the Synod of 2018 on “Young People, the Faith and Vocational Discernment.”  Two sentences from the preparatory document suffice to expose the next sham Synod’s subversive intent:

As in the days of Samuel (cf. 1 Sam 3:1-21) and Jeremiah (cf. Jer 1:4-10), young people know how to discern the signs of our times, indicated by the Spirit. Listening to their aspirations, the Church can glimpse the world which lies ahead and the paths the Church is called to follow. (Intro)

Utter nonsense, of course. Mere youth is not a prophetic charism. If anything, youth is more or less a state of ignorance the young are in the long process of surpassing by acquiring the wisdom that comes only with age and experience.  Moreover, it is the elders who show the young the way forward by their guidance in family and social life.

As for the notion that young people have some special ability to “glimpse the world which lies ahead,” it is ludicrous to predicate existence of a future state—“lying” ahead—that only the young can “glimpse” just because they are young. The future by definition has no existence, for if it existed it would be the present, and everyone, not just the young, would be able to “glimpse” it. Even within the framework of Einsteinian relativity, if one accepts it, there is no presently existing future but only distant events happening in our present, the visual perception of which is not yet within our “light cone.”

As Life Site News notes, for Synod 2018 “the President remains Pope Francis, the General Secretary remains Lorenzo Cardinal Baldisseri and the Special Secretary remains Archbishop Bruno Forte.” That is, Phony Synod  2018 will be stage-managed by the same triumvirate that rigged the Phony Synod 2014-15, whose only purpose was to provide window dressing for the predetermined promulgation of AL.

The triumvirate knows that the theme of the next Phony Synod is nonsense.  They and the rest of the Bergoglian regime have no intention of “listening to the young” except to the extent the lives of young people today reflect the same state of affairs the regime is already attempting to institutionalize in the Church by undermining, via AL, her doctrine and intrinsically related discipline concerning marriage and sexuality.

Nor, above all, does the regime have any intention of “listening to the young” who have been enlightened by the wise elders who exposed them to the riches of Tradition, including the immemorial Latin Mass, to which the young are flocking in ever-greater numbers.

No, under the cover of what Romano Amerio calls “juvenilism,” that absurd post-conciliar idolatry of youth, Phony Synod 2018 will only advance the plotting of aged progressive prelates who hope to bring to completion before they die the vast project of ecclesial auto-demolition at which they have been laboring for the past fifty years.

The Church of Bergoglio is no country for young men.


Catch Chris Ferrara's regular column in the Print/E-edition of The Remnant.

[Comment Guidelines - Click to view]
The Remnant values the comments and input of our visitors. It’s no secret, however, that trolls exist, and trolls can do a lot of damage to a brand. Therefore, our comments are heavily monitored 24/7 by Remnant moderators around the country.  They have been instructed to remove demeaning, hostile, needlessly combative, racist, Christophobic comments, and streams not related to the storyline. Multiple comments from one person under a story are also discouraged. Capitalized sentences or comments will be removed (Internet shouting).
The Remnant comments sections are not designed for frequent personal blogging, on-going debates or theological or other disputes between commenters. Please understand that we pay our writers to defend The Remnant’s editorial positions. We thus acknowledge no moral obligation whatsoever to allow anyone and everyone to try to undermine our editorial policy and create a general nuisance on our website.  Therefore, Remnant moderators reserve the right to edit or remove comments, and comments do not necessarily represent the views of The Remnant.
back to top
Last modified on Tuesday, August 29, 2017
Tweet

More in this category: « Tea with the Curate: “No Confession times; just call me.” On The Lighter Side: Pope Francis Guides Us in Truth »