Soul-killers of the New World Order 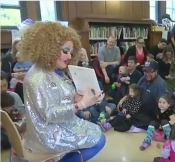 “But he that shall scandalize one of these little ones that believe in me, it were better for him that a millstone should be hanged about his neck, and that he should be drowned in the depth of the sea. Woe to the world because of scandals. For it must needs be that scandals come: but nevertheless woe to that man by whom the scandal cometh.” – Jesus Christ

Sometimes the news of the day is just too overwhelmingly heartbreaking to consider. I have little children, and, quite frankly, this story breaks my heart. Don’t look at the drag queen. We’ve all seen his poor, befuddled cries for help (and desperate quest for attention) before. Look at the children. . . look at their faces…and imagine they’re your kids, your grandkids:

The thought of kids being subjected to what’s going on in this public library fills me with desperate sadness. Their little minds—so innocent, so inquisitive, so trusting—suddenly assaulted by a barrage of ideological warfare served up by the adults in their lives, even the mothers and fathers they trust so implicitly. Regardless of where you come down on the homosexual question, there’s got to be a part of you that recognizes something very wrong with brainwashing little kids in subject matter even most adults don’t fully understand.  Can any civilization in history be accused of conducting such dangerous psychological experimentation on their own children?

Not long ago, doing this to children would have been against the law, God’s and man’s. We used to understand the value and fragility of innocence, the tragedy of innocence lost and the precious balance of childhood. Children were protected, shielded from that which they were too young to understand, and to which if they were exposed too young could destroy their innocence and cause permanent psychological damage.

We used to understand this, just as every civilization in history did. And then one day we decided to start sacrificing our kids on the altar of political correctness. We even started killing our babies in their mothers’ wombs. Lots of them, millions in fact. And this evidently cannot be done without massive psychological and moral consequences. Today we have thus developed an almost insatiable need to corrupt the little ones that made it past the abortortuaries.

“But,” our critics will say, “we as a society have evolved beyond such archaic moral concerns.” Really? Are you quite sure about that? The civilization that has developed the most efficient killing machines in history---capable of wiping out entire nations with the push of a button—has simultaneously developed a better moral compass?  We who abuse children, objectify women, drug kids by the millions somehow have developed a keener sense of morality than that which our grandmothers possessed—an evolved societal conscience that informs us it’s just fine to expose innocent little kids (whose bodies haven’t even fully developed yet) to cross-dressing sexhibitionists?  Well, what if we've been misinformed? What if we’re wrong about that? What if we’ve lost the ability to even know the difference between right and wrong? What if it turns out we’re actually damaging our kids—permanently?

Isn’t anyone interested in the science and psychology behind what we’re doing to our kids in the name of political correctness? Because if we’re not interested in even looking into possible long-term effects, then can it not be said of us—not that we’re morally more evolved—but rather that we just don’t care what happens to our kids?  Risking their psychological health is worth it to us, if it means we can justify whatever it is we’re doing in the here and now.

Such Orwellian mind-control sessions held in public libraries at the very least suggest that we’ve become so twisted—in mind, heart and soul—that we simply cannot stand the sight of what’s straight, even in kids. We’re phobic of innocence and innocents, and the way to make us feel right about the monsters we’ve become is to ask our children for absolution, approbation and approval. Again, if there’s precedent for this in human history I’d like to know what it is.

Like vampires feeding on the blood of virgins, we suck the innocence out of the littlest and purest among us, so that before long there will be no goodness left in the world—just addiction, death and darkness. Everyone around us will either be dead or dying, and then it won’t be so hard for us to look in the mirror and see the spiritual zombies we’ve become. When everyone looks and stinks just like us there will be no more guilt and the dehumanizing process will be complete.

God help us. God forgive us. We’re worse than Sodom, worse than pagan Rome—we the Christophobic soul-killers of the New World Order.

[Comment Guidelines - Click to view]
The Remnant values the comments and input of our visitors. It’s no secret, however, that trolls exist, and trolls can do a lot of damage to a brand. Therefore, our comments are heavily monitored 24/7 by Remnant moderators around the country.  They have been instructed to remove demeaning, hostile, needlessly combative, racist, Christophobic comments, and streams not related to the storyline. Multiple comments from one person under a story are also discouraged. Capitalized sentences or comments will be removed (Internet shouting).
The Remnant comments sections are not designed for frequent personal blogging, on-going debates or theological or other disputes between commenters. Please understand that we pay our writers to defend The Remnant’s editorial positions. We thus acknowledge no moral obligation whatsoever to allow anyone and everyone to try to undermine our editorial policy and create a general nuisance on our website.  Therefore, Remnant moderators reserve the right to edit or remove comments, and comments do not necessarily represent the views of The Remnant.
back to top
Last modified on Thursday, May 18, 2017
Tweet

More in this category: « Christians and the Assad Government: The Untold Story The Path to Rome and the Ascendency of Pope Peter II? »