SSPX Priest on Amoris Laetitia: How to disguise falsehood under the mantle of truth 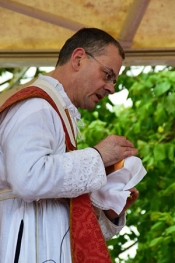 Father Guy Castelain, SSPX
Editor’s Note: Father Guy Castelain is the chaplain of the Marie Reine des Coeurs (Our Lady Queen of Hearts) Confraternity in France, which spreads True Devotion to Mary according to De Montfort. This article was published in the April 2017 edition of the Confraternity's bulletin (#144, April 2017). Again, we ask for prayers on behalf of our faithful translator of these important contributions from Europe. MJM

On the March 19 2016, Pope Francis' post-synodal Apostolic Exhortation Amoris Laetitia on love in the family was published. Why speak of this pontifical document in a publication devoted to the spirituality of Saint Louis-Marie de Montfort? Because Father de Montfort casts a singular light on the problematic posed by this document.

To begin with, a little reminder. The leitmotif or the thrust of the Second Vatican Council was aggiornamento, or in Latin accomodatio renovata, that is, opening and adaptation to the modern world. Paul VI explained the meaning of this term in his opening speech to the second session (1963): “that the deposit of Christian doctrine be conserved and presented in a more efficacious manner” and that doctrine “be deepened and expressed following the research methods and presentation used by modern thought”.

Simply put, it was, therefore, a case of marrying Catholic doctrine with the Atheism, Evolutionism, Modernism, Liberalism and immorality of the modern world. And herein lies the basic problem: how can you express Divine Revelation, that is, Catholic Faith and Morals, using the thought of today's world? Strictly speaking, it is a case of trying to square the circle.

Now, to use terminology more proper to Saint Louis-Marie de Montfort, the problem of the Second Vatican Council was that of marrying Divine Wisdom with the wisdom of the world. Saint Louis Marie de Montfort dealt with this subject in The Love of Eternal Wisdom in Numbers 74 to 89. Father de Montfort explains that the world “subtly [uses] the truth to inspire falsehood, virtue to authorize sin, and the very maxims of Jesus Christ to authorize its own” (Number 79).

Father Grignon also points out that worldly wisdom is “a perfect conformity with the maxims and fashions of the world... not in a clumsy and blatant way, by committing some scandalous sin, but in a subtle, deceptive and political manner; otherwise it would no longer be wisdom in the eyes of the world, but license” (Number 75).

Finally, he defines the worldly person as someone “who makes a secret but deadly agreement between truth and falsehood, between the Gospel and the world, between virtue and sin” (Number 76). De Montfort is here describing Liberal Catholicism (which ended up triumphing at Vatican II and in its reforms) a full one hundred years before its existence (19th Century).

What does Amoris Laetitia contain? A reminder of the doctrine of the indissolubility of marriage (in Numbers 52-53, 62, 77, 86, 123 and 178) and, at the same time, affirmations which grant divorced and remarried people the possibility of accessing the sacraments, that is to say Confession and Communion, without conversion, without contrition, without reparation for scandal, without ceasing to live in adultery and without ceasing their sin (in Numbers 243, 298-299, 301-305 and especially Note 351).

To be convinced of this, the reader can refer to two easily accessible publications: DICI Number 345 of November 25 2016 and Le Courrier de Rome Number 595 of January 2017.

De Montfort, with his eagle eye, saw the crux of the problem which currently occupies our attention: Conciliar wisdom consists in disguising falsehood under the mantle of truth, and vice under that of virtue. Thus, Amoris Laetitia, authorizes sacrilege under the pretext of being pastoral. Let it be said in passing that there is a good chance that the 2018 Synod will carry out the same sleight of hand with regard to ecclesiastical celibacy in order to permit the priestly ordination of married men.

De Montfort was truly a man in advance of his own time. This is so because he held to Catholic Doctrine, that of the Council of Trent, which in turn reiterates that of Saint Thomas Aquinas. In effect, history teaches us that, during this Council, two books were placed on the altar: The Bible or Sacred Scripture (Written Tradition) and the Summa Theologica of Saint Thomas Aquinas (representing Oral Tradition).

[Comment Guidelines - Click to view]
The Remnant values the comments and input of our visitors. It’s no secret, however, that trolls exist, and trolls can do a lot of damage to a brand. Therefore, our comments are heavily monitored 24/7 by Remnant moderators around the country.  They have been instructed to remove demeaning, hostile, needlessly combative, racist, Christophobic comments, and streams not related to the storyline. Multiple comments from one person under a story are also discouraged. Capitalized sentences or comments will be removed (Internet shouting).
The Remnant comments sections are not designed for frequent personal blogging, on-going debates or theological or other disputes between commenters. Please understand that we pay our writers to defend The Remnant’s editorial positions. We thus acknowledge no moral obligation whatsoever to allow anyone and everyone to try to undermine our editorial policy and create a general nuisance on our website.  Therefore, Remnant moderators reserve the right to edit or remove comments, and comments do not necessarily represent the views of The Remnant.
back to top
Tweet
More in this category: « Storm Clouds Over St. Peter’s: International Conference Calls on Pope to Answer Dubia Christians and the Assad Government: The Untold Story »