Written by  Christopher A. Ferrara
Rate this item
(31 votes)

The title of this post is about the last thing Remnant readers might expect from me, given my paper trail, which includes a 600-page study of the philosophy, theology, hagiography and mythology involved in the destructive rise and ever-accelerating fall of what the moderns call Liberty.

Then again, I am also on record praising the Constitution as a masterpiece of technical legal drafting whose problem consists not so much in what it provides as in what it omits: a foundation for the rights it asserts and the powers it purports to delegate and limit, that foundation being none other than God and His Law. It was not I but the Protestant President of Yale University, Timothy Dwight, who said this of the Constitution during the national chastisement of the War of 1812:

We formed our Constitution without any acknowledgement of God; without any recognition of His mercies to us, as a people, of His government, or even of His existence. The Convention, by which it was formed, never asked even once, His direction, or His blessing, upon their labours. Thus we commenced our national existence under the present system, without God.

But there is no denying the considerable human wisdom at work in the document, which was intended to create a republic rather than the mass democracy that quite predictably arose almost immediately from its general provisions and from the very creation of a central federal government. One example of that wisdom, now dismissed by Obama as a “vestige” of the original (failed) intent, is the Electoral College.

The Electoral College, established by Art. II, § 1 of the Constitution, was designed to prevent precisely the emergence of a mass democracy by avoiding any short of national popular vote for President in favor of state-by-state votes for Presidential electors, who were to serve as an additional baffle against the ephemeral swaying of the masses by demagogues. The College reflects the concept—otherwise inadequately expressed in the constitutional text—that each state is a sovereign co-equal with the others, so that no sovereign state should be able to dominate the other sovereign states in presidential elections merely on account being more populous. Hence each state receives two electors based on its equal representation in the Senate with only the number of additional electors being determined by the number of representatives in the House, which varies according to population. (It should be noted that the 12th and 23rd Amendments merely alter the Electoral College’s procedure, while the latter adds the District of Columbia to the College.)

The existence of the Electoral College is the only reason America does not now groan under the yoke of that demonic demagogue whose human form goes by the name Hillary Clinton, and her legions of demon-possessed minions. The Fake News Media trumpets without ceasing the factoid that Clinton “won the popular vote” when in fact there is no national “popular vote” for President and never has been. Clinton’s supposed lead of 2 million or more “popular votes” is smoke and mirrors. Moreover, her illusory “popular vote victory” consists entirely of massive wins in New York and Los Angeles, along with big majorities in California and New York State as a whole.

As the following spreadsheet shows, however, in the other 48 states combined Clinton lost the (legally non-existent) national “popular vote” by nearly 3.5 million votes. And even in the 50 states combined, minus the votes in Los Angeles and New York City, Clinton still lost “the popular vote” by more than 653,000 votes. The crooked media will never mention this, but it is highly irritating that not even Trump’s transition team has focused on the reality that Clinton’s “popular vote victory” occurred in two cities that have no right to dictate to the entire country the way Paris dictated to all of France during the French Revolution.

In essence, then, the Framers’ invention prevented our nation from being subjected to Hillary Clinton based on the votes of America’s equivalent of Sodom and Gomorrah. In these circumstances, we can see clearly that in devising the Electoral College the Framers built better than they knew, saving the nation from final disaster. And I say, may God bless them for it in that realm outside of time where each soul must face his particular judgment before the Lord of History, whom the Framers and the Founders so shamefully neglected. 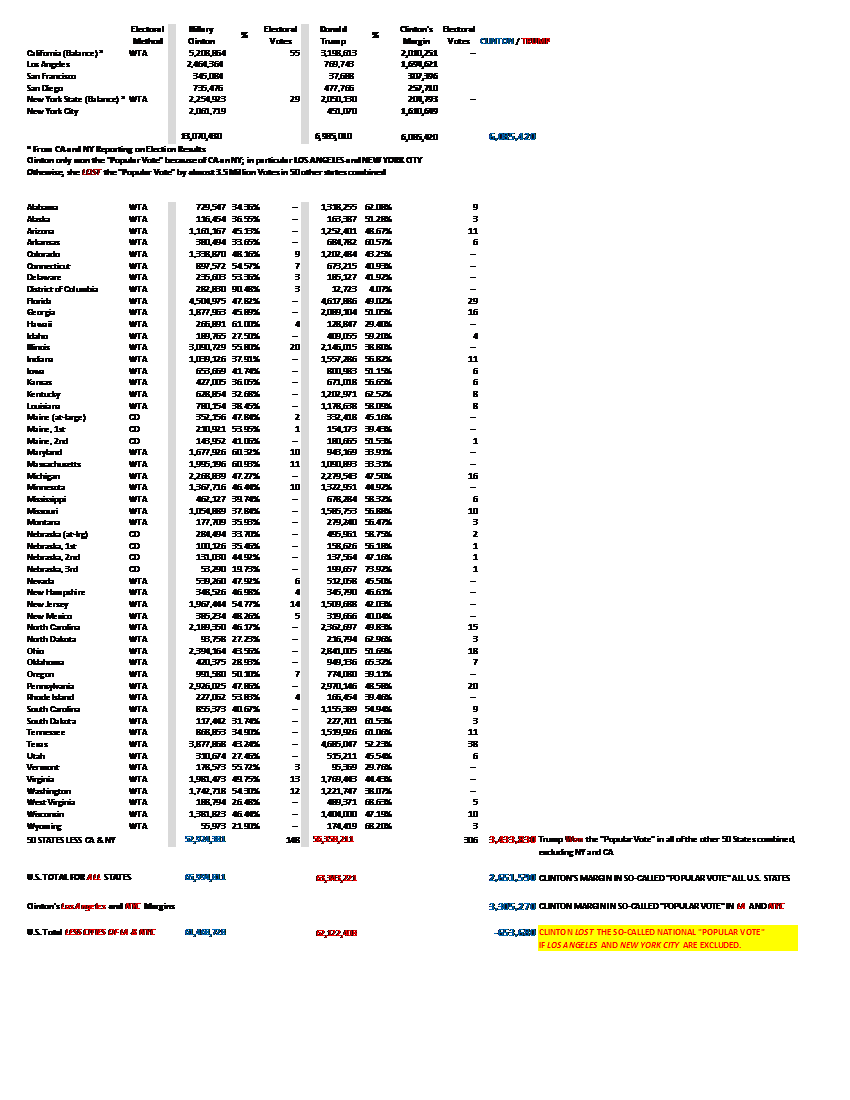 More in this category: « Russia and the Moral Depravity of the Obama Administration Does Amoris Laetitia Evoke Scandal? »