Written by  Christopher A. Ferrara
Rate this item
(85 votes) 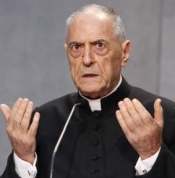 What Church do these cardinals defend? The Pope is faithful to the doctrine of Christ. What they have done is a very serious scandal that could even lead the Holy Father to remove the cape of the cardinalate, as has already happened at other times in the Church…. This is not to say that the Pope would withdraw their status as cardinals, but he could do it.

Spoken like a true made man: “What you have done is a great offense to the Boss. The Boss is very offended. He could have you whacked for what you did. I am not saying he will have you whacked, but he could. So you had better make peace or it could it could end—well, not so good for you.”

It was Don Vito who announced, following the rubout of the Church’s traditional annulment process last year, that the Boss now demands lots and lots of quick annulments from all his soldiers who have not yet been whacked by forced retirement or removal—out of concern for “the poor,” no less:

So, with this fundamental law, Francis makes a real beginning to his reform: by putting the poor at the center, that is, the divorced and remarried, considered set apart and distant, and asking bishops for a true and proper metànoia.

That is to say, a “conversion,” a change of mentality which convinces and sustains them in following the invitation of Christ, present in their brother, the Bishop of Rome, to pass from the restricted number of a few thousand annulments to that immeasurable [number] of unfortunates who might have a declaration of nullity

According to Don Vito—and he should know—it is none other than Christ Himself who demands an “immeasurable” number of annulments to help “the poor.” And what happens to those who refuse to help “the poor”? Right. They get whacked for all eternity, because “as long as you granted an annulment to one of these my least brethren, you granted it to me.”

Furthermore, as our eminently reliable spiritual guide also declared during the same address, to question Amoris Laetitia is to question two Synods, which are “the work of the Holy Ghost.” We need not be troubled that the result of the second Synod contradicted that of the first Synod, which was a defeat for the Boss, and that even the second Synod provoked his rage against the rigid, leading to Amoris, which finally gave him what he wanted. The Holy Spirit is like a wind that blows where it will. But we can be quite sure that the wind stopped blowing when it settled upon the pages of Amoris, which are most assuredly the will of the Holy Ghost written in stone.

So in the Gospel According to Vito, public adulterers must receive Holy Communion and the bishops must increase immeasurably the number of marriages they declare null. And just who are these four cardinals to argue with God, who has spoken to us through the Oracle of Rome?

This is where the Church stands today: at her very summit, Christ and the Holy Ghost have been anthropomorphized into enforcers of human schemes and plans cynically passed off as the designs of Heaven by men for whom the faith of our fathers simply no longer exists. As has become our custom in these days, we laugh at the incredible spectacle of it all, that we might not cry.

"It's nothing personal, Cardinal Burke...just business."

[Comment Guidelines - Click to view]
The Remnant values the comments and input of our visitors. It’s no secret, however, that trolls exist, and trolls can do a lot of damage to a brand. Therefore, our comments are heavily monitored 24/7 by Remnant moderators around the country.  They have been instructed to remove demeaning, hostile, needlessly combative, racist, Christophobic comments, and streams not related to the storyline. Multiple comments from one person under a story are also discouraged. Capitalized sentences or comments will be removed (Internet shouting).
The Remnant comments sections are not designed for frequent personal blogging, on-going debates or theological or other disputes between commenters. Please understand that we pay our writers to defend The Remnant’s editorial positions. We thus acknowledge no moral obligation whatsoever to allow anyone and everyone to try to undermine our editorial policy and create a general nuisance on our website.  Therefore, Remnant moderators reserve the right to edit or remove comments, and comments do not necessarily represent the views of The Remnant.
back to top
Last modified on Thursday, December 1, 2016
Tweet

More in this category: « "Mind-boggling Stuff of Nightmare": Fr. Brian Harrison on Pope's Proselytism Comments Storm Clouds Over the Vatican: Has the Battle Begun? »