A Meme from the Mean

A man willing to speak the truth in an alethephobic world is a man ready to hear a lot of this: You’re so mean! And you know what?  If you want to get your message out you'd better fix your tone!”

Truth these days has an automatic tonal problem however it's presented, whereas every manner of deceit is music to the modern ear. I don’t’ know how it happened but we've become so fragile, so feckless.

Remember when this guy was a hero of the silver screen?

Today they'd lock him up for scaring all the men out of the theater. Not a nice tone at all. We've gone all Justin Bieber these days.

A bit further back, the great Hilaire Belloc had a tone problem, too. Remember this one:

Goodness me, what a rad-trad meanie. Terrible tone, right there!

These days there are two social non-negotiables: 1) Don't smoke and 2) Don't be a meanie. You can abort your baby. You can marry your wife's brother. You can curse up a storm in a Wal-Mart. But don't speak the truth in public, because that's just mean!

This has been going on for a while, of course. The secularists and God-haters called the Meanie Police on Cardinal Ratzinger before he'd left the loggia. Remember?  God’s Rottweiler was mean, because he wasn't ready to shut up and bow down to the Lords of Political Correctness.

Over at the Clinton News Network they’re doing something similar to Donald Trump—every night, in fact. That’s about all they have, I guess— “He’s so mean. And he really doesn’t sound like a wuss…I mean presidential.”

And of course they never tire of crucifying believing Christians as worse than meanies: “Don't stick your hateful religion in my face! Heaven doesn't even exist. So go to Hell.”

Where am I going with all this? Well, we’ve been getting some unsolicited “tone coaching” over here at The Remnant this week from a few friends who don’t appreciate the fact that, out of sheer desperation, some old Trad warhorses--John Vennari, Chris Ferrara and Michael Matt--took their case against Pope Francis directly to his face.

"Good statement," they patronized, "but — wait for it! — bad tone. I mean, you guys sound really mean."

I think they mean well (pun intended), but what I can’t figure out is what they imagine might happen if I were to suddenly develop a super dulcet tone and morph into Mahatma Gandhi.  Would Francis and his legions of fans suddenly say: “Oh, I’m sorry. You’re right! We are out of control, aren't we!”

I think I'm as nice as the next guy, but I've yet to discover a nice way of telling someone they're going to hell, for example. It's not a nice place to go, and it's not a nice thing to say. But if it's true, it must be charitably said...even if the Meanie Police take umbrage.

I’m beginning to think that maybe “you need to change your tone” is a euphemism for “I don’t have an answer to the case you just made. I'd make it myself, in fact, but then people wouldn't like me anymore. . . and I like being liked.”

If a person is going to object to something these days he’s got to make absolutely certain his objection doesn’t offend anyone. Otherwise he’ll get a Tone Citation from the Meanie Police and won't be invited to cocktail parties anymore. He's permitted to register his complaint—in a nice way—but then he needs to get lost.  Anything more than that and he loses credibility with the pretty people in the big time.

Anyway, for me this is hopeless. In all things, Caritas, of course, but I’m just not very good at making myself seem reasonable to the unreasonable or sane to the insane or nice to the vicious. And I’m way too old to worry about making myself sound pretty to the ugly. Christ tells us to love our enemies, and I do try. But He didn’t say I have to be nice to people who are wrecking everything for which we've all sworn to die rather than deny. This is war, and I guess the question is: Are we soldiers of Jesus Christ, or merely His faint-hearted politicians?

So what to do. Since most of our friendly-fire critics hail from the blogosphere, I thought I'd respond in a super-duper nice way by using one of their favorite things--a meme.

For the first time in my life, then, I actually created one... found it rather therapeutic, in fact.  Making this meme made me feel downright grateful to the critics who inspired it.  So here goes... 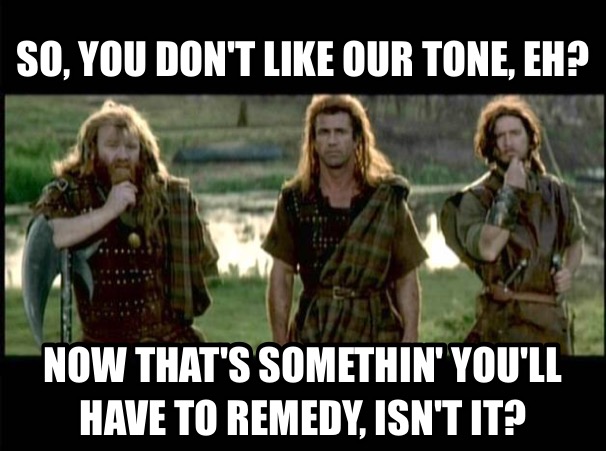 God bless all of our friendly critics [and that was written in a sincerely nice tone].

[Comment Guidelines - Click to view]
The Remnant values the comments and input of our visitors. It’s no secret, however, that trolls exist, and trolls can do a lot of damage to a brand. Therefore, our comments are heavily monitored 24/7 by Remnant moderators around the country.  They have been instructed to remove demeaning, hostile, needlessly combative, racist, Christophobic comments, and streams not related to the storyline. Multiple comments from one person under a story are also discouraged. Capitalized sentences or comments will be removed (Internet shouting).
The Remnant comments sections are not designed for frequent personal blogging, on-going debates or theological or other disputes between commenters. Please understand that we pay our writers to defend The Remnant’s editorial positions. We thus acknowledge no moral obligation whatsoever to allow anyone and everyone to try to undermine our editorial policy and create a general nuisance on our website.  Therefore, Remnant moderators reserve the right to edit or remove comments, and comments do not necessarily represent the views of The Remnant.
back to top
Read 9444 times Last modified on Friday, September 23, 2016
Tweet

More in this category: « HBO's 'The Young Pope': Another Christophobic Yawner Remnant, CFN Open Letter to Pope Francis Translated, Broadcast Around the World »