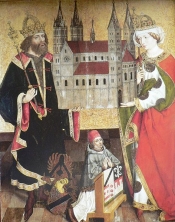 St. Henry the Good with his wife, St. Cunegunda
We are probably all familiar by now with the very sensible Ann Barnhardt Maxim: your desire for political office is ipso facto proof that you are not qualified to hold any political office.

Given our current diseased political class and climate of not only irrationality but anti-rationality it is very difficult to argue against this. I don't know much about American politics (it was never my beat, even when I was writing about politics for a living) but it seems that the disease that is so evident in the current American election cycle is the same that we can see in every political jurisdiction in the western world (and most of Asia).

The stench of Marxist putrefaction is exactly the same, no matter where you are, whether it is Washington, Brusels, London, Rome or little Valletta. The source was Gramsci, Alinksy, Frankfurt School, Soros... etc... We all know by now. (And if we don't just go ahead and Google those terms and get yourself up to speed.)

The take-over has been almost total, both in the parliaments and in every other venue of public life (most certainly and especially the Church). The Long March Through the Institutions has been a smash success, they have almost completed their task of turning the whole world into one titanic re-education camp. So, well done all.


Recently, however, I came across something from history that I think is perhaps the only way around the problem. We know that man needs governing. But what do we do in a situation where no one who wants to govern can be trusted to do so justly?

Henry II, HR. Emperor from 1014 to 1024, was the son of the Duke of Bavaria and had wanted to be a Benedictine monk. As the son of his father, and therefore the only possible heir to his cousin, Otto III who died in 1002, he was rather stuck with political power and position, instead of having sought it out.

Wikipedia summarizes his rule, saying, "The rule of Henry II is seen as a period of centralized authority throughout the Empire. He consolidated his power by cultivating personal and political ties with the Catholic Church. He greatly expanded the Ottonian dynasty's custom of employing clergy as counter-weights against secular nobles. Through donations to the Church and the establishment of new dioceses, Henry strengthened imperial rule across the Empire and increased control over ecclesiastical affairs. He stressed service to the Church and promoted monastic reform. For his personal holiness and efforts to support the Church, Pope Bl. Eugene III canonized him in 1146, making Henry II the only German monarch to be a saint."

The wonderful Vultus Christi blog, a work of the Benedictine monks of Silverstream Priory in Ireland, gives "An authentic spiritual biography" of this great saint and patron of Benedictine oblates:

Henry was crowned Emperor in Saint Peter’s Basilica by Pope Benedict VIII in 1014. Henry cherished Benedictine life, spending time in monasteries whenever he could. His greatest joy was to occupy a stall in choir and join the monks in singing the Divine Office. Henry founded monasteries throughout the Empire and endowed them liberally. While detained at Monte Cassino by illness, he was miraculously cured through the intercession of Saint Benedict. Saint Henry’s feast, falling within the Octave of Saint Benedict, is a reminder of the special bond that united him with our glorious Patriarch.

Saint Henry became an oblate of the Abbey of Cluny and then asked to make profession as monk at the Abbey of Saint-Vanne. The abbot received him as a monk, and then ordered him, in the name of obedience, to take his place again on the imperial throne.

I can just imagine the conversation.

"You are a monk. And as a monk you are under obedience. As your superior, I am giving you your work assignment. Go emperor."

There's something about taking on spiritual works; prayer, sacrifices, fasting and abstinence, that is not generally remembered in the Church. The great spiritual writers have always said that to do these things on your own, without asking permission of a spiritual superior, without, in other words, being under obedience, robs the act of its merit. Moreover, the person doing them, far from benefiting, is in grave danger of succumbing to that worst, most deadly and insidious of all sins: spiritual pride.

With this rule in mind, it becomes very easy to see why our political class has become so foully corrupt. As corrupt, perhaps, as those pagan Roman Emperors of the old days.

It is also easy to see the remedy.

Catch Hilary's regular columns in the print edition of The Remnant!

[Comment Guidelines - Click to view]
The Remnant values the comments and input of our visitors. It’s no secret, however, that trolls exist, and trolls can do a lot of damage to a brand. Therefore, our comments are heavily monitored 24/7 by Remnant moderators around the country.  They have been instructed to remove demeaning, hostile, needlessly combative, racist, Christophobic comments, and streams not related to the storyline. Multiple comments from one person under a story are also discouraged. Capitalized sentences or comments will be removed (Internet shouting).
The Remnant comments sections are not designed for frequent personal blogging, on-going debates or theological or other disputes between commenters. Please understand that we pay our writers to defend The Remnant’s editorial positions. We thus acknowledge no moral obligation whatsoever to allow anyone and everyone to try to undermine our editorial policy and create a general nuisance on our website.  Therefore, Remnant moderators reserve the right to edit or remove comments, and comments do not necessarily represent the views of The Remnant.
back to top
Last modified on Saturday, August 20, 2016
Tweet