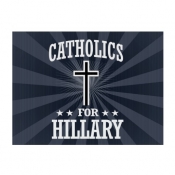 May a Catholic vote for a Democrat?

I said “may,” not “can.”   Behind the curtain any voter can do as he pleases. But “can” and “ought” are different things. Is it morally permissible for a Catholic to vote for a party that has enshrined abortion in every presidential platform in recent memory?

Heaven forbid I should deny the most cherished right of every citizen, or imply that Republicans have boldly stood in the way of the baby-killing juggernaut since 1972.   But hypocrisy is the tribute that vice pays to virtue, and Democrats should not deny that they have made unrestricted abortion a virtue, or at least a “right” on par with voting.   Killing a baby in its mother’s womb is a transcendent evil, and evil triumphs when good men do nothing.   Who among us, either by omission or commission, will not be held accountable on Judgment Day?


Among other things, we will be measured by what we might call a Hierarchy of Complicity.

(6)           Encouraging a daughter to get an abortion to avoid family embarrassment.

(13)        Preferring human respect to the charity of fraternal correction toward Catholics who vote for pro-abort candidates.

Human respect has made us reluctant to hurt anyone’s feelings.   In reality, many people should have their feelings hurt. Their souls might depend on it.

It is more than forty years too late to lament the Church’s failure to make an example of Ted Kennedy or Mario Cuomo. Who fears the Catholic Church these days anyhow? Certainly not the Democrat National Committee (DNC).   Why fear the Francine Church? The only sins it recognizes are attending the Traditional Mass, doubting climate change, or being judgmental.

Vatican II has provided cover for those ethnic Catholics unable or unwilling to outgrow their anti-Republican prejudices.   My Sicilian grandmother, may she rest in peace, would not tolerate criticism of Franklin Roosevelt. I’ve known good Irish Catholics who would suffer insults against the Blessed Virgin Mary before they would the least criticism of John Kennedy. In my highly ethnic rust belt home town, Catholic Democrats imbibed anti-Republican prejudices with their mothers’ milk.   Republicans were the Episcopalian or Presbyterian fat cats, the Babbitts and bankers and bosses and country club WASPS.   The Democrat Party, according to the legend, was the party of the “little guy.”

Blue collar ethnic Democrats need to wake up. This isn’t 1930. They are justified in claiming Republicans have no guts but not in claiming only Republicans are beholden to special interests.

The DNC discovered envy, the most effective lubricant in politics, and still uses it to turn voters into hogs and guide their noses to the trough of taxpayer dollars. Demagoguery, however, will not be confined forever to economic matters.   Democrats soon discovered that relieving us of the burdens of natural law and conventional morality harvests even more votes.   The erstwhile party of the little guy morphed into the party of every perversion, corrupting a nation behind the camouflage of compassion.   To the indifference, nay, the cheerleading, of the DNC the Slaughter of the Innocents has continued, not at the hands of Herod’s soldiers but at those of the babies’ own mothers.

Lawmakers who are “personally opposed” to abortion but support it anyhow are cousins to Catholic voters who leave their faith outside the polling place. One former Congressman who had some integrity, Robert Dornan of California, criticized in the 1990s Catholic colleagues who always left their faith in the Speaker’s Lobby.   He was met by a hailstorm of indignation.

Neither Salazar nor Garcia Moreno nor St. Louis nor Isabella will be on the ballot this year.   We’ve lost everything but the hope of fighting delaying actions and slowing our rate of decline.

We might rework the aforementioned observation of Burke on evil.   Evil triumphs when Catholics are too cowardly or confused to practice their own faith.   Catholics helped elect Bill Clinton and Barrack Obama. Yes, the same Obama who obliges (nominally) Catholic colleges to remove crucifixes from their walls before he speaks there.

We all know Catholics, even “traditional” Catholics, who will flip that lever for Hillary.   Number 12 in the list above applies to them, and they will have blood on their hands.

[Comment Guidelines - Click to view]
The Remnant values the comments and input of our visitors. It’s no secret, however, that trolls exist, and trolls can do a lot of damage to a brand. Therefore, our comments are heavily monitored 24/7 by Remnant moderators around the country.  They have been instructed to remove demeaning, hostile, needlessly combative, racist, Christophobic comments, and streams not related to the storyline. Multiple comments from one person under a story are also discouraged. Capitalized sentences or comments will be removed (Internet shouting).
The Remnant comments sections are not designed for frequent personal blogging, on-going debates or theological or other disputes between commenters. Please understand that we pay our writers to defend The Remnant’s editorial positions. We thus acknowledge no moral obligation whatsoever to allow anyone and everyone to try to undermine our editorial policy and create a general nuisance on our website.  Therefore, Remnant moderators reserve the right to edit or remove comments, and comments do not necessarily represent the views of The Remnant.
back to top
Last modified on Monday, August 8, 2016
Tweet
More in this category: « Polish Bishops Ask Francis About Radical Secularization: “Accompany! Don’t be a gnostic pelagian! Sorry, what was the question again?” Missionaries of Mercy: Catholic Priests of the Titanic »