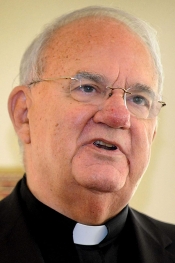 In his blogpost Monday, Bishop Robert Lynch said that Catholicism “targets” and “often breeds contempt for gays, lesbians and transgender people.” The seed of contempt, he said, turns into hatred, “which can ultimately lead to violence.” Unless this attitude changes, he states, “we can expect more Orlandos.”

"Sadly, it is religion, including our own, which targets, mostly verbally, and also often breeds contempt for gays, lesbians and transgender people. Attacks today on LGBT men and women often plant the seed of contempt, then hatred, which can ultimately lead to violence." ...Bishop Robert Lynch

In Breitbart's report on this bizarre blogpost, author Thomas D. Williams notes: "In his post, the bishop made no attempt to explain how a 29-year-old Muslim who never stepped foot in a Catholic Church would have been motivated to carry out his deed by a supposed Catholic “contempt” for homosexuality." READ ARTICLE HERE

REMNANT COMMENT: Such reckless irresponsibility on the part of a Catholic bishop at a time like this is nothing short of dangerous. Bishop Bob Lynch should be forced to retire for trying to politicize this horrific tragedy even before the police and FBI have discovered the facts of the case.

Nothing is known for sure, other than that lots of people are dead after a Muslim shooter started spraying lead in a gay nightclub in Orlando. Reports are coming out today that the shooter himself may have been a homosexual, with the Associated Press reporting that Omar Mateen is reported to have been a regular at the nightclub. One witness told the AP that Mateen tried to pick up men there.

So, what now? Is His Excellency going to blog blame the entire gay community (like he did the Catholic community) for this mass shooting, because the gay community didn't do enough to make this nutter feel good about himself? No, of course not. The Bishop’s agenda is all about one thing: ingratiating himself with the far-Left.

For Bishop Bob the politically correct message is: “Catholicism is homophobic, and aren’t I something for admitting the truth!” This on the very day when criminal proceedings were initiated against the Archbishop of Valencia, Cardinal Antonio Canizares—the “Little Ratzinger”—for inciting ‘hate crimes’ in a recent homily in defense of the Christian family in Spain.

“The family is haunted today in our culture,” said the Cardinal, “by an endless threat of serious difficulties, and this is not hidden from anyone. We have legislation contrary to the family, the action of political and social forces, with added movements and actions of the gay empire, of ideas such as radical feminism or the most insidious of all, gender theory.”

On June 3, 2016, a criminal complaint of hate speech was filed against the Cardinal by a coalition of pro-LGBT associations in Spain (including the Communist party). Would Bishop Lynch agree that those charges should indeed be filed against his brother bishop for defending the ‘homophobic’ moral theology of the Catholic Church? Apparently so.

As for the merits (or lack thereof) of Bishop Bob’s statement, is it even necessary to respond to such crude and transparent kowtowing to the gods of political correctness? Are we to believe that His Excellency has suddenly developed amnesia, and just clean forgot that the whole revolutionary idea of the Catholic religion is to turn the other cheek, to love the sinner, to work for the salvation of all, to hate no one, even our greatest enemies?

Remember all that, Bishop Bob?  And this is to say nothing of the fact that the vast majority of Catholics today have more or less abandoned the Church's moral teaching on homosexuality anyway. So what Bishop Bob is actually targeting here is a strawman. He’s doing what American bishops do best—kissing up to the far-Left, which is why his blogpost also calls for more gun control, less  enorcement of immigration laws and an end to Islamic profiling.

The reality is this: The Catholic Church has never taught, suggested or implied to anyone, anywhere or at any time that hate is okay, that murdering those who do not believe is an option, that slaughtering sinners and, objectively speaking, sending them straight to hell is somehow pleasing to Almighty God.

The idea of murdering unrepentant sinners is arguably more repugnant to Catholics than to the followers of any other religion. We are the ones who still believe in the ‘antiquated and medieval’ notion of everlasting hellfire. We revere the Sacrament of Extreme Unction, whereby sinners are given one last chance to make themselves ready to meet God and save their immortal souls. For faithful Catholics, very few things on this earth are more terrifying than the thought of sudden and unprepared death for themselves and indeed for any and all of God’s children.

Not all religions share this sentiment. The Sword Verse, for example, is the fifth verse of the ninth sura of the Qur'an. It is the Qur'anic verse widely-cited by critics of Islam to suggest the faith promotes violence against "pagans" ("idolators"), because it orders believers to "fight and slay the Pagans wherever ye find them."

But Bishop Bob says nothing about this in his blog post, of course, since it was so much easier for him to tell the world that Catholicism is to blame for Omar Mateen’s rampage.  Political animals like Bishop Bob refuse to connect the dots, even if and when the shooter is standing in the doorway, AR-15 in hand, shouting “Allahu Akbar and “death to the infidel” as he mows down his fellow human beings.

It's Christianity's fault, says Bishop Bob. Why? Because Muslims might take umbrage at the truth, and Bishop Bob is a coward who is using hate speech against soft targets. Christians can be counted on to do what Christians always do--turn the other cheek.  So Bishop Bob has no problem making grandiose statements against Christians, which, by the way, are so very pleasing to the kids at MSNBC. He even asks us to make the monumental leap that an Islamic guy shooting up a gay nightclub is the result of the teachings of the Catholic Church. There'll be no consequences for his outrageous claim, of course, and Bishop Bob knows it. In fact, he counts on it -- that’s how “dangerous” Christians are in the real world.

As the situation goes from bad to worse in our country, let’s not forget that Bishop Robert Lynch chose to ignore the facts about this horrific act of violence in order to issue a statement in support of his leftist ideology that further polarized people on all sides. Instead of bringing people together, he pointed fingers of blame, using hateful rhetoric that could so easily inspire still more violence, this time against people who had absolutely nothing to do with this twisted terrorist act. In other words, the Bishop is part of the problem, not the solution.

Please pray for the victims of this truly ungodly and grotesquely anti-Christian act of terrorism in Orlando.

[Comment Guidelines - Click to view]
The Remnant values the comments and input of our visitors. It’s no secret, however, that trolls exist, and trolls can do a lot of damage to a brand. Therefore, our comments are heavily monitored 24/7 by Remnant moderators around the country.  They have been instructed to remove demeaning, hostile, needlessly combative, racist, Christophobic comments, and streams not related to the storyline. Multiple comments from one person under a story are also discouraged. Capitalized sentences or comments will be removed (Internet shouting).
The Remnant comments sections are not designed for frequent personal blogging, on-going debates or theological or other disputes between commenters. Please understand that we pay our writers to defend The Remnant’s editorial positions. We thus acknowledge no moral obligation whatsoever to allow anyone and everyone to try to undermine our editorial policy and create a general nuisance on our website.  Therefore, Remnant moderators reserve the right to edit or remove comments, and comments do not necessarily represent the views of The Remnant.
back to top
Last modified on Tuesday, June 14, 2016
Tweet

More in this category: « Francis Discovers Heresy (While Uttering It) Neo-Catholics in a Quandary; Francis Says Great Majority of Marriages are Null »