Kasper: The pope wants to change your mentality 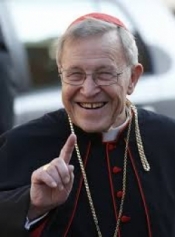 What's so funny, Walter?
In an interview with the German regional newspaper Aachener Zeitung on April 22, Cardinal Walter Kasper spoke of the further church-reform plans of Pope Francis and his intention "not to preserve everything as it has been of old." With Pope Francis, "things are not anymore so abstract and permeated with suspicion, as was the case in earlier times," he said.

This should send shock-waves down the spine when we consider that one of the key objectives of the Freemasons at Vatican II was to make the faithful think that the sublime mystery of the Latin Rite was just the "mumbo-jumbo of soothsayers." Modernists maintain that the Church of old was in the "dark ages" and that it needs to be updated.


Kasper who acts as Francis' pet theologian stressed that the pope's objective isn't to merely change the Church's structure, but to permeate and alter the Church's mindset. "He changes many things – but not only structurally. He aims especially at the mentality."

Hence the faithful should be on their guard against temptation and not be shaken by proposals from the Holy See that we alter the Church's doctrine. Our faith stands on the Rock of Peter as instituted by Christ, not on a mere man who decides to dissent from it.

People think that if the pope changes from blue to red and green, the church is supposed to change colors with him, but the Church was never set up that way. Our calling is to remain true-blue and the pope's calling is to simply make sure we stay that way.

Resistance is needed, and Catholics should understand that their allegiance to tradition is the very thing that will help the pope and the papacy. Melchior Cano, the great Dominican theologian from the Council of Trent, said: "Those who blindly and indiscriminately defend every decision of the supreme Pontiff are the very ones who do most to undermine the authority of the Holy See—they destroy instead of strengthening its foundations."

[Comment Guidelines - Click to view]
The Remnant values the comments and input of our visitors. It’s no secret, however, that trolls exist, and trolls can do a lot of damage to a brand. Therefore, our comments are heavily monitored 24/7 by Remnant moderators around the country.  They have been instructed to remove demeaning, hostile, needlessly combative, racist, Christophobic comments, and streams not related to the storyline. Multiple comments from one person under a story are also discouraged. Capitalized sentences or comments will be removed (Internet shouting).
The Remnant comments sections are not designed for frequent personal blogging, on-going debates or theological or other disputes between commenters. Please understand that we pay our writers to defend The Remnant’s editorial positions. We thus acknowledge no moral obligation whatsoever to allow anyone and everyone to try to undermine our editorial policy and create a general nuisance on our website.  Therefore, Remnant moderators reserve the right to edit or remove comments, and comments do not necessarily represent the views of The Remnant.
back to top
Tweet
More in this category: « Amoris Laetitia: Foolish Bishops and Bishops Playing Us For Fools Neo-Catholics Create a Category Five Spin-Vortex Over Amoris Laetitia »