Nothing New Under the Sun: A Pirate is Still a Pirate 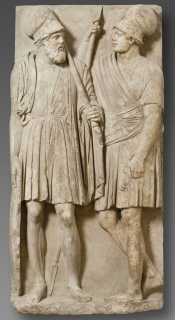 Let me ask a question with a hypothetical situation.

Once upon a time, there was a small town, somewhere on the Mediterranean, that was threatened with extinction from constant raiding by wicked and ruthless pirates. Fed up with their fear and losses, the town hires a security company to protect them. The situation goes on for years and years, with the pirates not giving up, constantly attempting to assault the town, but the security company turns out to have been a good investment, and manages to hold them off. There is a standoff, but at least the townspeople in this situation of relative interior peace can start to rebuild their lives, and even start to flourish.

One day, however, the head of the security company retires, as had happened many times in the past, but this time the new guy has a different set of priorities. He starts telling the townspeople that the pirates are really not such bad fellows, and that they should try to understand things from their perspective. The townspeople are a bit bewildered by this, but since the security company has been protecting them without incident for generations it doesn’t occur to them that there could be anything much wrong. Some of them start to take the Security Chief’s advice and start trying to generate some sympathy for the pirates.

As time goes on, the Chief becomes more and more insistent that the townspeople have been wrong to be so adversarial towards the pirates, who, after all, are poor men only trying to find a way to improve their sad lot in life. The Security Company has kept things peaceful for so long that those who had lost their mothers and fathers and husbands or wives, or had their livelihoods destroyed are all dead. It has been generations since there has been an assault. Maybe, say some, the pirates have actually given up. Maybe, say others, an accommodation could be made with them so that we don’t even need the Security Company anymore.

Then some of the Chief’s lieutenants, men who had volunteered from amongst the townspeople’s own sons, started to take up the refrain, even suggesting that there is “nothing new” in this. It had been all along part of the Security Company’s long-term plans to “integrate” the pirates into the society of the town. These fellows, wearing plain clothes instead of the Security Company’s uniform, started going to the pubs and wine bars and piazzas and talking with people in their own language, saying that there was really nothing any longer to fear from the pirates.

Some of the older townspeople, who remembered what life was like under the terror of the pirates, tried to warn against this talk, but they were shouted down by the Chief’s lieutenants. “Unforgiving!” they yelled. “How can you be so selfish as to not want to share your good fortune with these poor, poor men!” And even worse, “The Chief is the head of the Security Company! You are only a stupid peasant, and could not possibly have access to the kind of special knowledge that he has. He knows things you don’t. How do you dare to question him?”

The arguments went on like this for some time, with the town becoming more and more divided. The Chief himself gave many speeches, almost every day, and he and his lieutenants continued to insist that things had to change, while at the same time emphatically maintaining that things could not possibly change. People were growing more and more confused, and the town was in an uproar.

All this went on until the Chief issued a proclamation that the pirates are not to be feared, and that they should be allowed to come into the town, at least on a case-by-case basis, one at a time. “Individuals will be selected to make determinations…” (the Chief liked to talk like this because he thought it made him sound much more official) “…according to their concrete situation and whatever mitigating circumstances there might have been to drive them tragically into piracy will be taken into account.”

Amazingly to some older people, the Chief even suggested, though in veiled language, that piracy itself was really not always or in every situation a bad thing: “Objectively, yes. But of course, we must remember that each person’s situation is different, and that to him piracy might not seem that bad. And anyway, there are the children of the kidnapped girls to think of. How would it be if we snatched away their fathers and repatriated their mothers? Eh? No? That would be lacking mercy! We must not always stick so closely to the rules. Think of the children!”

Far from calming the situation, the uproar exploded louder than ever at this. Some of the townspeople decided that it was time to skedaddle, and started packing. Some had been ready to go for some time, keeping their belongings tied up in a bundle in the attic. These started talking about how it was much safer in the East where, yes, admittedly there were still lots of pirates, but at least they didn’t have to rely upon a Security Company whose Chief could at any time go completely insane.

“In the East,” these people started to say, “people band together for themselves to protect their towns and families. And anyway, they’re pretty closely related to us and mostly speak the same language. Maybe having a Security Company with a Chief in charge was not such a great idea.”

At the same time, the Chief’s hired lieutenants and the volunteers started praising the proclamation and explaining that it didn’t really mean what the older people were saying it meant.

“The Chief’s document thus envisions allowing the pirates to join us, even though we know they are living in an objectively bad way. But they themselves, as individuals, cannot be held to account for this and therefore, are not mortally culpable for their actions due to various cognitive or psychological conditions.” (The Chief’s way of talking had become very popular with these fellows.)

“Since they are not mortally culpable, they could be validly absolved, if they confessed to being pirates, even if they intended to keep pirating from inside the town. Nothing in this is new.”

We will have to leave the story here, because no one ever heard from that town again. Those were ancient times and the story was told in clay and stone tablets that had been unearthed around Greece and stored in various museums for generations with no one putting it all together. When archaeologists finally deciphered the texts, they went looking, but no trace of the town has ever been discovered except some burned and toppled ruins with similar writing.

But the debate has continued among specialists. If the town was destroyed finally by the Chief’s bad judgement, or even by his being an agent of the pirates themselves, as some have suggested, should the Chief’s self-appointed, volunteer lieutenants be considered traitors to their town? Or were they simply dupes?

More in this category: « Does No One Care About the Pope's Immortal Soul? [Ferrara Article on Exhortation Translated into French] Amoris Laetitia: l'anatomie d'une débâcle pontificale »