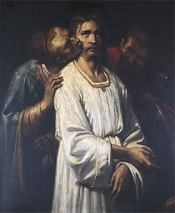 Pope Francis is not happy with his good bishops. For the past several months he has showed irritation toward Vatican conservatives who oppose his synodal proposals that we show more openness to homosexuals and civilly remarried Catholics. It seems he has been on a rant by constantly lashing out against traditional cardinals whom he compares to the "doctors of the law" that "are closed to the prophecies and the lives of persons," though he does this indirectly through little digs that surface in his homilies.

His morning homily at the Vatican Casa Santa Marta on April 11 was no exception to this. Therein he defended Judas as the "poor man," while lamenting that "the doctors of the letter" had no compassion on him. "It hurts when I read that small passage from the Gospel of Matthew, when Judas, who has repented, goes to the priests and says: ‘I have sinned' and wants to give... and gives them the coins. ‘Who cares! - they say to him: it’s none of our business!’ They closed their hearts before this poor, repentant man."

First of all, it's important to note that there was no contrition in Judas' repentance. Were it otherwise, he would have gone directly to Jesus and apologized to him. He rather went and hung himself with a halter, which was an act of final impenitence—a mortal sin. Revelation has it that he is now one of the demons of Hell who tempt the faithful on earth, something God would never permit had he truly been innocent and contrite.

And whereas the chief priests were most wicked, they were not inhumane to Judas, because Judas was not seeking their forgiveness or understanding. Judas simply returned the money to them because he didn't want to bear the blame of the Crucifixion; he couldn't face up to what he did. It was an attempt to wash his hands. Like Pilate, he knew of Jesus' innocence, so he said, 'look to it yourself, I don't want your money.'

One cannot help to note, too, how Francis laments so deeply the hardness of heart wherewith the high priests behaved toward Judas, yet he says nothing of the cruelty and hardness that they demonstrated toward the Son of God whom they were about to kill. Where in the Church's history was it said or taught that the high priests were evil because they were mean to Judas?

The pope's homily on April 11 came on the heels of his widely criticized Apostolic Exhortation Amoris Laetitia issued on April 8, wherein he confirms the proposals of the October 2014-15 Synods on the Family that the Church be open to the lives of unrepentant gays and adulterers. Francis' thrust is that we accept them into the Church as they are, but this unfortunately blesses sin before the faithful—something that God will never ratify. "Woe to the world because of scandals?" (Mt 18:7)

As expected, Amoris Laetitia breaks with 2000 years of tradition by permitting some divorced and civilly remarried Catholics to receive Communion with no stipulation to live as brother and sister. (Paragraph 300, note 336) Footnote 351 to Article 305 explicitly states that the "help" offered by the Church to those living in adultery can "in certain cases... include the help of the sacraments." That is, the Church helps adulterers by giving them Communion.

This not only breaks with the Church's centuries old discipline on the reception of Communion, but constitutes a change of doctrine, since altering the discipline now proclaims to the Church that adultery is no longer a mortal sin.

From the onset the pope's focus was never about admitting Communion to gays and adulterers, but about integration. The "liturgical, educational, pastoral, and institutional" roles advocated by the October 2015 Synod were outlined by the pope two years ago, as we read in the Dec. 8, 2014 issue of CNS: "Pope Francis said that the Catholic Church must consider various ways to integrate the divorced and civilly remarried in the life of the church—not merely allowing them to receive Communion, but letting them serve as Eucharistic ministers and godparents."

These attempts are futile. The path to integration has already been laid out through holy tradition. Those living in sin simply need to renounce their lifestyle and partner, and go to confession, so that their integration will be complete. Now they can be reinstated into the Church and even receive Communion, so that the Eucharist will now help them, and not condemn them as St. Paul warns.

But allowing irregular couples into the Church as they are only sustains their offense, so that they remain separated from God and unable to be saved should they die without repentance. It deceives them, and deceives the faithful, which is no charity.

True charity means converting the wayward, that they might leave their unhappy state and be joined with Christ in His Church, but Francis sees this as an imposition. Jesus cleansed the lepers that they might be liberated from their affliction, yet Francis leaves the morally afflicted in their leprosy to suffer, and then calls it love and mercy.

Love is in the faithful keeping of God's laws, as expressed by Christ: "If you love me, keep my commandments." (John 14:15) Yet, Francis expresses irritation over tradition-minded Catholics who faithfully keep the law, comparing them to the hypocritical Pharisees and high priests who followed the law to "the letter." Let us not forget that the Pharisees were not the teachers of the law, but were apostates that had completely left the Jewish law, evidenced by their sorcery, their child abuse, and their murder of the Messiah who gave them the law. The Pharisees never obeyed God's law, but only pretended to. It was their pretense and hypocrisy that irked Our Lord.

Alluding to our traditional bishops, the pope on April 11 spoke of these callous high priests, saying that all that mattered to them "were the laws, so many words and things they had built." What is implied is that the holy doctrines and traditions of the Catholic Faith are just "traditions of men" which today's Pharisaic conservatives have built up for themselves. Has Francis not considered that he is the Pharisee persecuting these holy men?

Francis seems to think that the Cardinal Burkes and good bishops are the "judges" who persecute the innocent—whom he holds to be the poor gays, Judases, and adulterers—because they don't adhere to their own "stiff-necked" version of the Word of God. He overlooks the fact that all the martyrs through the centuries, and without exception, were the staunch Catholics who adhered strictly to the laws, doctrines, and tradition of the Faith, so much so, that they chose to die rather than compromise one point of tradition. We speak of those tough and holy bishops, virgins, hermits, and fighters for Heaven who absolutely refused to change with the times. This is why they were saints.

Francis has forgotten that in every case, without exception, it was the left-wing dissident Catholics, heretics, Marxists, infidels, adulterers, homosexuals, i.e. the enemies of tradition, that inflicted this persecution upon the Catholics. This persecution has now reached unprecedented heights.

We today are witnessing the re-crucifixion of Christ; the Mystical Body is truly passing through its Passion. It is a reply of the Crucifixion as the scribes and high priests of the Novus Ordo go about stirring up the people against Jesus and His traditions. Sorrowfully, we see Francis at the helm persecuting the innocent while praising the names of the martyrs, which calls to mind the Pharisees who pretended to honor the memory of the prophets, but who were "the sons of them that killed the prophets." (Mt. 23:31)

We've seen the replay of the Crucifixion; now we need a replay of Damascus. Jesus cries out today, saying, "Francis, Francis, why do you persecute me?" We pray he will open his heart and recognize who his true friends are—the Bishop Schneiders, Cardinal Burkes, and Cardinal Sarahs—that he may open his eyes and see their genuine love for God's people, evidenced by their tireless efforts to bring the pure waters of tradition to the thirsting flock.

May Francis do likewise. May he open his eyes and understand that if he loves souls, he will labor with all his will to bestow on the people the treasures of the Catholic Faith in all its facets—the knowledge of Heaven, the saints, the mystics, the miracles, the dogmas, the laws, the Tridentine Mass—that they be enriched and edified like no other people on earth.

And may he likewise deign to reach out and extend the beauties of the Faith to all peoples, that they may leave their particular ideas, miseries, idols, and religions, and be joined with Christ in the bosom of His Church. The jewels of sacred tradition were not to be hoarded, but shared. What greater mercy can the pope show for poor sinners than by enriching them with the glories of the One True Faith!

Jesus said to Peter, "Simon, son of John, do you love me?" Peter answered, "You know that I love thee." Jesus said, "Feed my sheep." We pray that Francis will embrace the Church's mission to convert the world, and not see this as "competition" or the pompous flaunt of Pharisaic peacocks that want to fan their ostentatious feathers. May he see it rather as the Church's mission of mercy, as given to us by Jesus Christ 2000 years ago.

[Comment Guidelines - Click to view]
The Remnant values the comments and input of our visitors. It’s no secret, however, that trolls exist, and trolls can do a lot of damage to a brand. Therefore, our comments are heavily monitored 24/7 by Remnant moderators around the country.  They have been instructed to remove demeaning, hostile, needlessly combative, racist, Christophobic comments, and streams not related to the storyline. Multiple comments from one person under a story are also discouraged. Capitalized sentences or comments will be removed (Internet shouting).
The Remnant comments sections are not designed for frequent personal blogging, on-going debates or theological or other disputes between commenters. Please understand that we pay our writers to defend The Remnant’s editorial positions. We thus acknowledge no moral obligation whatsoever to allow anyone and everyone to try to undermine our editorial policy and create a general nuisance on our website.  Therefore, Remnant moderators reserve the right to edit or remove comments, and comments do not necessarily represent the views of The Remnant.
back to top
Tweet
More in this category: « Revising 1 Corinthians in Light of Amoris Laetitia Does No One Care About the Pope's Immortal Soul? »