Holy Week in Spain (Why do Neo-Catholics Hate the Catholic Church?) 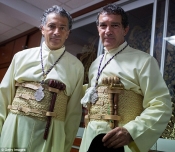 Actor Antonio Banderas (right) - pictured with his brother, Javier Dominguez Banderas - participated in Holy Week celebrations at San Juan Bautista church in his native Málaga
Ever mention the word ‘monarchy’ to a neo-Catholic? It's like holy water to a vampire.

How about ‘Catholic confessional state’? It makes him see red.

‘Christendom’? Well, that was a very long time ago, he’ll assure you—and, besides, there were a lot of abuses. Just look at how many things for which Pope John Paul ‘The Great’ had to apologize!


Want to know what they’re actually helping to bury with their ‘useful idiotic’ rhetoric so appreciated by the jackbooted thugs of the New World Order? The freemasons? The Deists? The Socialists? The Communists? The Nazis?

Whatever label you wish to you affix to the Christophobes down through history who labored to destroy Christendom, uncrown Christ and erect an altar to the god ‘We The People’— this is what they were actually trying to destroy. It's Holy Week in Málaga, Spain, and it provides a fleeting glimpse of what we have lost — a faith so powerful that Catholics needed streets, cities and entire countries in which to manifest their love of God and His Mother and His Holy Church.  Behold the majesty of Christendom, so universally loathed by the anti-Christians of the new order:

This is what they hate with all the fury of hell. This is the essence of the Catholic thing and ever since it was destroyed, the world has fallen into constant war, bloody revolution, and endless terror. (And freedom of religion? Yeah, right!)

If this doesn't make you weep over what we Catholics have lost — what they've stolen from us, what they've ripped from the souls of our children forever — then you've ceased to be Catholic. You are indeed a 'neo-Catholic' and you must come back to the Catholic Church.

NOTE ON THE WHITE HOODS: No, my neo-Catholic friends, it's not the KKK. We're not in America anymore, Toto.  The ancient nazareno or penitential robe for some of the participants in the processions consists in a tunic, a hood with conical tip (capirote) used to conceal the face of the wearer. They were widely used in the medieval period for penitents, who could demonstrate their penance while still masking their identity.

[Comment Guidelines - Click to view]
The Remnant values the comments and input of our visitors. It’s no secret, however, that trolls exist, and trolls can do a lot of damage to a brand. Therefore, our comments are heavily monitored 24/7 by Remnant moderators around the country.  They have been instructed to remove demeaning, hostile, needlessly combative, racist, Christophobic comments, and streams not related to the storyline. Multiple comments from one person under a story are also discouraged. Capitalized sentences or comments will be removed (Internet shouting).
The Remnant comments sections are not designed for frequent personal blogging, on-going debates or theological or other disputes between commenters. Please understand that we pay our writers to defend The Remnant’s editorial positions. We thus acknowledge no moral obligation whatsoever to allow anyone and everyone to try to undermine our editorial policy and create a general nuisance on our website.  Therefore, Remnant moderators reserve the right to edit or remove comments, and comments do not necessarily represent the views of The Remnant.
back to top
Last modified on Saturday, March 26, 2016
Tweet

More in this category: « The Roman Forum in Italy Now Accepting Reservations: Half a Millennium of Total Depravity (1517-2017) A Day in Court: Little Sisters of the Poor vs. the Leviathan »