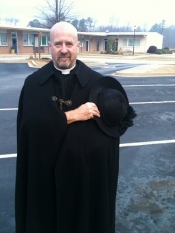 Let’s begin with a definition.

This is the definition of “fundamental”:


Adjective form: forming a necessary base or core; of central importance; affecting or relating to the essential nature of something or the crucial point about an issue; so basic as to be hard to alter, resolve, or overcome.

Noun form: a central or primary rule or principle on which something is based.

The root is the Latin “fundare”, meaning “to found”.

I was thinking about mathematics this morning, and found it very, very interesting that mathematicians, physicists and engineers that believe:

No one ever accuses an engineer of excessive rigidity or of a “fortress mentality” for his unswerving and intransigent belief in the fundamental properties of algebra.  No one deems an engineer deeply flawed as a human being if he refuses to entertain the notion that the additive inverse of x might NOT be (-x), much less tolerate a plan for a building put before him in which the plans operate on the premise that the reciprocal of 2 is ¼.

The heresy of Modernism has been well defined as “to not believe what one believes”.  Only in the irrational, self-contradicting philosophical matrix of Modernism does believing in the fundamentals of one’s professed belief system make a person either crazy or evil.

Sadly, in today’s Church, thoroughly infiltrated by Modernism, it is simply incomprehensible that a Catholic not only should, but MUST believe the fundamentals of the Catholic faith with more certainty and less doubt than the fundamental properties of algebra.  The supreme truth in the universe is Catholicism, not mathematics.  After all, five loaves and two fishes went into baskets, and hundreds, if not thousands of loaves and fishes came out.  The multiplicative identity did not hold.

What the hurling the word "fundamentalist" as a pejorative at Catholics but not mathematicians, physicists and engineers proves is that the hurler fully and completely assents to and believes in mathematics and does not harbor any doubt.  The facts of Divine Revelation to which the Church bears witness? Not so much.

Therefore, I am a Catholic fundamentlist, and I cannot be gaslighted by anyone for being so.

[Comment Guidelines - Click to view]
The Remnant values the comments and input of our visitors. It’s no secret, however, that trolls exist, and trolls can do a lot of damage to a brand. Therefore, our comments are heavily monitored 24/7 by Remnant moderators around the country.  They have been instructed to remove demeaning, hostile, needlessly combative, racist, Christophobic comments, and streams not related to the storyline. Multiple comments from one person under a story are also discouraged. Capitalized sentences or comments will be removed (Internet shouting).
The Remnant comments sections are not designed for frequent personal blogging, on-going debates or theological or other disputes between commenters. Please understand that we pay our writers to defend The Remnant’s editorial positions. We thus acknowledge no moral obligation whatsoever to allow anyone and everyone to try to undermine our editorial policy and create a general nuisance on our website.  Therefore, Remnant moderators reserve the right to edit or remove comments, and comments do not necessarily represent the views of The Remnant.
back to top
Last modified on Monday, March 14, 2016
Tweet

Ann Barnhardt spent 15 years in Denver as a commodities broker, specializing in cattle and grains and serving small-to-medium sized livestock and grain producers in the former United States and Canada.  After shuttering her firm in the face of massive, systemic corruption in the financial markets and government, Barnhardt declared a federal tax strike, liquidated her estate, and now lives "off the grid". She blogs at www.Barnhardt.biz on matters pertaining to the Church, politics, islam, and economics, including monetary theory, banking theory, derivatives and arbitrage. She was born into Jesus Christ and His Holy Church at the Easter Vigil of 2007.  She found the Gregorian Rite in July of 2008, and never looked back. She wears, on occasion, trousers.

More in this category: « Has Father Longenecker Retracted Yet? A Request for Comments from the Remaining Presidential Candidates, 2016 »