The New Evangelization: Making the Exception the Rule 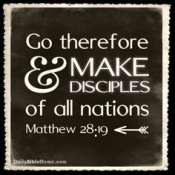 What does THIS mean to you?
Many are aware that the Commission of the Holy See for Religious Relations with the Jews recently released a document entitled The Gifts and Calling of God are Irrevocable. This document admits it isn’t part of the magisterium, nevertheless it was released by the Vatican and placed on the Vatican website, so it caused quite a stir when it said: “the Catholic Church neither conducts nor supports any specific institutional mission work directed towards Jews.”  Putting aside the distinction between institutional evangelization and informal evangelization, one may wonder how the Catholic Church went from evangelizing the Jews for nearly 2,000 years to no longer supporting “institutional mission work directed towards Jews”. Quite simply, the answer is the “new evangelization”.


What is the New Evangelization?

Now that we have an operative definition for the new evangelization, we must ask why the Catholic Church changed the method of evangelism, beginning shortly after the Second Vatican Council and culminating with the release of the new document The Gifts and Calling of God are Irrevocable. Simply put, the change in evangelization is due to a change in emphasis in what the church believes. Let’s examine what the church teaches and then address why the church changed her emphasis.

The Catholic Church teaches that outside the church there is no salvation. This doctrine is traditionally known by the Latin term extra ecclesiam nulla salus (hereafter EENS). It is imperative to note that this teaching is a dogma[6] of the Catholic Church and for this reason it cannot be rejected.

A Change in Emphasis

Having explained these two doctrines, we are now ready to consider why there was a change in emphasis, which led to a change in evangelization.

On the one hand, before the Second Vatican Council, EENS was always in the forefront and it drove the missionary activity of the church. After all, if there is no salvation outside the church, then it becomes necessary to have a rigorous evangelization program. On the other hand, the doctrine of invincible ignorance was a rare exception[10] and was in the distant background. However, with the coming of the Second Vatican Council, the church wanted to soften its approach towards the world, for better or for worse, thinking this would somehow bring about a “new Pentecost” and unite all “separated brethren”. As a result, the doctrine of invincible ignorance was highlighted in the Second Vatican Council, and one may say was brought to the foreground. Whereas the doctrine of EENS was still affirmed by Vatican II,[11] it was placed in the background.[12] The new attitude became: surely most people are invincibly ignorant, so we need not evangelize as urgently and in the same way as before.[13] This is what led to the change in evangelization – a change in doctrinal emphasis which led to a change in evangelistic approach.

Is the Change Good?

The question now is whether or not such a change in emphasis was a good decision (as a side note this issue will be debated by Mark Shea and Christopher Ferrara on Jan. 12, 2016).  For what it is worth, I do not believe this change in emphasis was helpful, as it is both uncharitable and barren.  It is barren as any statistic on conversions before and after the Second Vatican Council will demonstrate. It is uncharitable by way of the following analogy:

Imagine you were a fireman and there was a child in a burning building in front of you. Would you merely pray for the child or would you try to save the child and pray for their safety? Most people of faith would say that one should pray and try to save the child from the fire, as it is extremely unlikely they would survive otherwise. Granted, it is possible that God would answer the prayer, and in an extreme exception, grant the child the ability to find some form of shelter from the heat and enough air to survive the fire on their own. Yet, who in their right mind would base their decision on whether or not to help the child upon such an extremely rare possibility? Would it really be loving to say “I’ll just pray that God saves you but I won’t attempt to save you myself.” Anyone who has a heart realizes they cannot make the exception the rule and act based upon an exception in such circumstances. So it often is with the new evangelization. It is as if the church is looking at a world burring in the flames and says “well, since it is possible that someone could be saved because of invincible ignorance, we don’t have to evangelize in the same way as we did before, we will just entrust the people to God and hope they come to us.”

A Call to Return to the Old Evangelization

The Remnant is fighting back! Will you help us?
[1] John Paul II And the New Evangelization, p. 28. Emphasis mine.

[3] It is true that, at times, the new evangelization calls people to salvation in Christ, but the emphasis on this being found in the Catholic Church alone is most often excluded.

[4] It is true the “new evangelization”, in its best expression, includes a verbal message, yet this method often avoids anything controversial which would make non-Catholics feel offended.

[7] This is not to say that invincible ignorance guarantees salvation, it just means salvation isn’t excluded when one is ignorant due to no fault of their own.

[8] The Catholic Church teaches that the sacraments are the ordinary means of salvation, but in rare circumstances, an implicit desire for the sacraments will suffice. See. Dr. Ludgwig Ott, Fundamentals of Catholic Dogma.

[9] See Pope Pius IX On Promotion of False Doctrines (Quanto Conficiamur Moerore): “We all know that those who suffer from invincible ignorance with regard to our holy religion, if they carefully keep the precepts of the natural law which have been written by God in the hearts of all men, if they are prepared to obey God, and if they lead a virtuous and dutiful life, can, by the power of divine light and grace, attain eternal life. For God, who knows completely the minds and souls, the thoughts and habits of all men, will not permit, in accord with His infinite goodness and mercy, anyone who is not guilty of a voluntary fault to suffer eternal punishment (no. 7).

[10] This isn’t to say that the doctrine of EENS is suspended for those who are invincibly ignorant, but it to say that it is possible for the invincible ignorant to be united to the church in an extraordinary way known to God alone.

[11] “Hence, those cannot be saved, who knowing that the Catholic Church was founded through Jesus Christ, by God, as something necessary, still refuse to enter it or remain in it" (Decree on the Church's Missionary Activity no. 7).

[12] This can be demonstrated by reading Lumen Gentium 14-16 and observing which doctrine is emphasized.

[13] There is no reason to assume most are invincibly ignorant. One should evangelize in such a way that assumes every all non-Catholics are in jeopardy, because, at least objectively speaking, they are.

[Comment Guidelines - Click to view]
The Remnant values the comments and input of our visitors. It’s no secret, however, that trolls exist, and trolls can do a lot of damage to a brand. Therefore, our comments are heavily monitored 24/7 by Remnant moderators around the country.  They have been instructed to remove demeaning, hostile, needlessly combative, racist, Christophobic comments, and streams not related to the storyline. Multiple comments from one person under a story are also discouraged. Capitalized sentences or comments will be removed (Internet shouting).
The Remnant comments sections are not designed for frequent personal blogging, on-going debates or theological or other disputes between commenters. Please understand that we pay our writers to defend The Remnant’s editorial positions. We thus acknowledge no moral obligation whatsoever to allow anyone and everyone to try to undermine our editorial policy and create a general nuisance on our website.  Therefore, Remnant moderators reserve the right to edit or remove comments, and comments do not necessarily represent the views of The Remnant.
back to top
Tweet
More in this category: « A Day in the Life of a Benedictine Town The Depraved Leading the Morally Bankrupt »