On Queens, Popes and Presidents at Christmastime 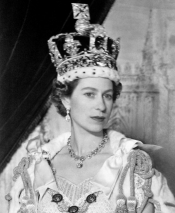 Something struck me as I watched this year’s Christmas message from Queen Elizabeth—the longest reigning English monarch in history. There seemed to be a distinct look of sadness in her eyes, as if she were giving us a fleeting glimpse of what she wants to be as England’s queen—a truly Christian monarch—as opposed to what she’s allowed to be.

Take a look for yourselves:

Long ago I stopped anticipating the day when Queen Elizabeth would raise her voice in thunderous defense of marriage or the unborn or the family, which are under greater attack in her country than perhaps anywhere else in the world. Knighting Elton John was probably the last straw for me.

Still, I understand from my English Catholic friends that if ever there were a prisoner in Buckingham Palace, she’s it. Perhaps this is wishful thinking on their part, I don’t know. Whatever it is, there’s no doubt that the grace and elegance of the Queen’s Christmas message, as well as the accompanying video clips, remind us of an old (and much better!) world that is fast fading away and that will disappear altogether with the passing of Elizabeth’s generation. Perhaps that living reminder explains the sadness on both sides of the camera.

Despite the social and religious chaos that now tears England apart at the seams, mere remnants of the grand traditions of the royal family—embodied by the old Queen—represent more hope and promise to the people of the world than David Cameron’s government could ever hope to understand, much less provide.

Even traditional Catholics in that country will extend every benefit of the doubt to “their Lady” as they cling to the fleeting and fading memories of the far, far better day and age she now represents. Nearly every real power has been stripped away from her, except that of her personal power to remind them of how grace and goodness once looked, sounded and acted before the world was summarily handed over to barbarians.

Would that Pope Francis could see this. In his ruthlessly egalitarian worldview, he sees those same crumbling bastions of faith, tradition, nobility, and monarchy as medieval stuff to be despised by “we the people”. He feels himself duty bound to tear them down, in fact, preferring hotels to papal apartments, black work shoes to red slippers (symbolic of the blood of martyrs), and the coarse language of the people to the elevated discourse of Christ’s vicars. How foreign and bourgeois Peter’s most recent successor must seem to England’s gentle queen who, despite her faults, obviously understands well the daunting responsibility that comes with high office.

Where’s Queen Elizabeth’s Fiat, for example? Why isn’t she making a spectacle of herself by dumbing down her dress, speech and attitude? She is perfectly capable of understanding that the trappings of nobility have little to do with her personal attributes and privileges, and everything to do with her duty and responsibility to the elevated office she occupies.

For her people, Queen Elizabeth represents everything to do with hope and promise for the future, based on faith and cherished traditions of the past. They desire nothing more than that she should remain on the throne of her predecessors and rule with love. She is their mother, their lady, their queen—and the very last thing they would ever countenance is her slumming with them, an unthinkable indignity for her and for them.

Queen Elizabeth is one of the most beloved leaders in the world today. Why? Because she has the humility and grace to embrace the burden she was crowned to accept nearly sixty years ago, when she agreed to devote her life to the service of her subjects—not by becoming one of them, but by being set apart from them for their sake, for God, and for country.

There are so many things with which we can disagree with Queen Elizabeth, and so many things about her situation about which we know precious little. But in terms of her unshakable commitment to live up to her state in life, she is an example to the modern, democratized world—and one which a pope or two would be well advised to carefully consider.

Perhaps I’m just another sentimental Yank who’s grown weary of modern democracy’s false premises and phony promises, but after comparing her Christmas message to the vapid nothingness of our president’s “holiday” greeting, I hope I can be forgiven for setting aside disagreements long enough to say:

[Comment Guidelines - Click to view]
The Remnant values the comments and input of our visitors. It’s no secret, however, that trolls exist, and trolls can do a lot of damage to a brand. Therefore, our comments are heavily monitored 24/7 by Remnant moderators around the country.  They have been instructed to remove demeaning, hostile, needlessly combative, racist, Christophobic comments, and streams not related to the storyline. Multiple comments from one person under a story are also discouraged. Capitalized sentences or comments will be removed (Internet shouting).
The Remnant comments sections are not designed for frequent personal blogging, on-going debates or theological or other disputes between commenters. Please understand that we pay our writers to defend The Remnant’s editorial positions. We thus acknowledge no moral obligation whatsoever to allow anyone and everyone to try to undermine our editorial policy and create a general nuisance on our website.  Therefore, Remnant moderators reserve the right to edit or remove comments, and comments do not necessarily represent the views of The Remnant.
back to top
Last modified on Tuesday, December 29, 2015
Tweet

More in this category: « My Lazy Gun A Remnant Teaser: How the Internet is Destroying Us »