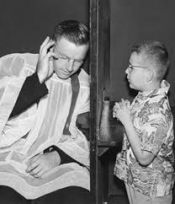 “Bless Me, Father, For I Want Mercy. My Last Confession Was…hey, who are you to judge?”

The Last Word is boycotting the Year of Mercy, much as we have boycotted the Luminous Mysteries and other V2 novelties. I urge all pastors and the faithful as well to be very wary of this Jubilee Year Trojan Horse.

Many of you may remember listening to radio and television broadcasts by Archbishop Fulton Sheen. So popular was this American prelate that the famous comedian Milton Berle remarked that the only reason Sheen’s ratings were higher than his was that the bishop had God as a sponsor. Among many memorable quotes of Archbishop Sheen was this gem: “It used to be that we believed that only the Blessed Mother was conceived without Original Sin; now it seems that everyone thinks himself immaculately conceived!”

The Immaculate Conception is, of course, a dogma of the Church and a Holy Day Feast in December. How appropriate that during the Advent Season in which the Church is preparing for the birth of our Savior we are also celebrating the singular privilege granted to His Mother to have been immaculately conceived.

The mystic Blessed Anne Catherine Emmerich described the Immaculate Conception of Mary by her parents Joachim and Anna as by a purely spiritual embrace which took place in the Jewish Temple:

Joachim came to a place in the midst of which stood a pillar in the form of a palm tree with hanging leaves and fruits. Here he was met by Anna, radiant with happiness. They embraced each other with holy joy, and each told the other their good tidings. They were in a state of ecstasy and enveloped in a cloud of light. I saw this light issuing from a great host of angels, who were carrying the appearance of a high shining tower and hovering above the heads of Anna and Joachim… I saw that this tower seemed to disappear between Anna and Joachim, who were enveloped in a glory of brightness. I understood that, as a result of the grace here given, the conception of Mary was as pure as all conceptions would have been but for the Fall. I had at the same time an indescribable vision. The heavens opened above them, and I saw the joy of the Holy Trinity and of the angels, and their participation in the mysterious blessing here bestowed on Mary's parents (The Life of the Blessed Virgin Mary part II.I)

For the rest of us, who are conceived in a fallen condition, Original Sin is removed by the sacrament of Baptism and subsequent personal sins are forgiven by the sacrament of Penance. Every Catholic second-grader properly prepared for his First Confession knows this (as well as the proper matter and form of Penance) but apparently not every cardinal accepts this—or even the Bishop of Rome. At least this would seem to be the case, given ongoing initiatives intended to fast-track adulterers back to Holy Communion.

Fr. Celatus's 'The Last Word' Appears in Every Print-edition of The Remnant.


What are the matter and form of Confession? According to the Catholic Church: contrition, confession, satisfaction and absolution. But the Kasperian compromise for restoring unrepentant sinners and granting them access to the Blessed Sacrament lacks an essential component of Confession: contrition.

Let’s imagine, for a moment, what a Kasperian confession might look like, with Father Bergoglio as confessor:

Penitent: “I am in an adulterous relationship and I have no intention of stopping my immoral behavior.”

Confessor: “Who am I to judge? For your penance read Laudato Si and turn down your thermostat three degrees. I absolve you from your sins in the Name of the Mother and of the Son and of the Holy Spirit.”

Even a seven-year-old — at least those who have so-called Fundamentalist Catholic parents — would spot the missing essential sacramental component in this example. Here is what the Baltimore Catechism teaches and cites by way of biblical support with regard to a truly Catholic understanding of contrition:

“Contrition is sincere sorrow for having offended God, and hatred for the sins we have committed, with a firm purpose of sinning no more. Let the wicked man forsake his way and the unjust man his thoughts, and let him return to the Lord; and he will have mercy on him. (Isaiah 55:7)”

Contrition is not simply sorrow over an undesirable situation the sinner has caused himself by his own sin. No, true contrition MUST include some degree of hatred for sin itself and a firm purpose of sinning no more. In his mercy God allows even imperfect contrition to suffice for the sacrament of Confession but not an absence of essential elements of contrition, including a resolve to sin no more. This resolve is what is lacking in the Kasperian compromise for readmitting unrepentant sinners to Holy Communion.

The Last Word fears that essential components of contrition will be sadly lacking in the Jubilee Year of Mercy as well. This is far from an unfounded fear, based on the words and actions of Francis of Rome and the recently concluded Sex and the Synod. In fact, given how the Bishop of Rome initiated, coopted and manipulated the Synod on the Family for his own ungodly modernist purposes there is every reason to believe that the so-called Year of Mercy is simply another papal tactic to accomplish his personal Francis-Effects. Among these effects one can imagine a dumbing down of the stigma attached to the deadly sins of abortion, homosexuality, cohabitation and adultery. God save us from wandering Apostles of Mercy!

For this reason, namely, that there cannot be absolution without the prerequisite condition of contrition and that this essential component for mercy is sorely lacking in the theology of this pontificate, The Last Word is boycotting the Year of Mercy, much as we have boycotted the Luminous Mysteries and other V2 novelties. I urge all pastors and the faithful as well to be very wary of this Jubilee Year Trojan Horse.

If Francis of Rome wants a Year of Mercy then he should act in obedience to the Blessed Mother and consecrate Russia to the Immaculate Heart of Mary. That single act would usher in an entire era of divine mercy and peace for the Church and world. But short of that long overdue act of consecration we should not expect mercy but rather an ever intensifying application of divine wrath upon the V2 church and world. Regrettably, there is little hope for divine clemency under the pontificate of Francis, who continually proves to be an unprecedented chastisement and scourge upon the Church and world.

[Comment Guidelines - Click to view]
The Remnant values the comments and input of our visitors. It’s no secret, however, that trolls exist, and trolls can do a lot of damage to a brand. Therefore, our comments are heavily monitored 24/7 by Remnant moderators around the country.  They have been instructed to remove demeaning, hostile, needlessly combative, racist, Christophobic comments, and streams not related to the storyline. Multiple comments from one person under a story are also discouraged. Capitalized sentences or comments will be removed (Internet shouting).
The Remnant comments sections are not designed for frequent personal blogging, on-going debates or theological or other disputes between commenters. Please understand that we pay our writers to defend The Remnant’s editorial positions. We thus acknowledge no moral obligation whatsoever to allow anyone and everyone to try to undermine our editorial policy and create a general nuisance on our website.  Therefore, Remnant moderators reserve the right to edit or remove comments, and comments do not necessarily represent the views of The Remnant.
back to top
Last modified on Saturday, December 12, 2015
Tweet
More in this category: « PETITION IN SPANISH: The Remnant solicita a S.S. Francisco que cambie de rumbo o renuncie al cargo de Sucesor de S. Pedro 8 de diciembre de 2015 Festividad de la Inmaculada Concepción (RUSSIAN TRANSLATION) Срочный призыв к Римскому Папе Франциску сменить курс или отказаться от от папского санa »