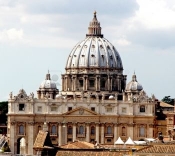 Advent is when the Christian world awaits the birth of Christ. But in Rome this week, the holy season is being overshadowed by a pagan light show.

On December 8, the Feast of the Immaculate Conception, various global partners under the auspices of the U.N. and World Bank will conduct a climate-change light show at the Vatican to launch Pope Francis' Year of Mercy.

Entitled Illuminating our Common Home, the New-Age presentation will project “images of our shared natural world” onto the facade of St. Peter’s Basilica in an attempt to “educate and inspire change around the climate crisis across generations, cultures, languages, religions and class.” (PRNewswire, Dec 4)


The Vatican spokesman for the event, Archbishop Rino Fisichella, says this "unique" show will present images inspired “of humanity, of the natural world, and of climate changes,” and says the event is intended to tie Pope Francis' encyclical on the environment with the United Nations Climate Change Conference (Cop21) presently underway in Paris.

Obscura Digital, the San Francisco-based organization that's actually putting on the show, derives its name from the Latin root meaning "dark." The group specializes in creating “immersive experiences that will change the way you think about the world around you” by using holographic projections, 3 dimensional animation, and dynamic visualization.


This light show reflects the agenda of U.N. internationalists, pro-aborts and degenerates that have long labored to abolish Christianity and to merge all peoples into a one-world government. To this end they’re working to subvert the Church by getting it to unite with the world, and the December 8 spectacle will mark a historic milestone in that process. The beast will literally shine its dark light on the seat of Christianity, marking a new beginning wherein the Vatican will join the global initiative to bow to the planetary idol of "Mother Earth."

Let us not forget that this terrestrial deity has as its head Lucifer, “the prince of this world,” who generates these currents to sweep us off the straight and narrow. Radical Environmentalism as seen by its global architects is nothing more than idol-earth worship where we deny God and attend to the planet instead.

The World Bank that is funding the event, diabolical in its nature, is affiliated with U.N. of course. Through its World Bank Spiritual Unfoldment Society (SUS) they advocate occult practices that engage in trans-humanistic “meditation sessions” aimed at “personal transformation through self-knowledge, understanding, and awakening higher consciousness.”

These Luciferians will project their "light" all over St. Peter's on December 8th. And to think that this abomination should occur on the most important Marian feast day of the Catholic Church!

Though he may mean well, Pope Francis is consorting with the enemy in his plan to “bring about a better world.” Isn’t the Light of Christ sufficient for him? Was something lacking in the torch of Eternal Light that was handed by Christ to his Apostles 2000 years ago? Quite apparently the globalists at the U.N. have duped him into thinking that the United Nations can be an instrument for good, and now the World Bank with its hands bloodied by abortion and population control is sponsoring the Vatican light show to launch the Year of Mercy. But for who? It appears this mercy is really about the “care” of the planet, not about the spiritual care of God's children.

We all remember how the Vatican hosted a special one-day summit on April 28, in which several representatives from the U.N. were given a platform to voice their "Sustainable Development Goals" of making the earth a cleaner and safer place through worldwide population control (abortion). These goals were unanimously endorsed by the Vatican the very next day, April 29.

The one-day summit, entitled Protect the Earth, Dignify Humanity: The Moral Dimensions of Climate Change and Sustainable Development, featured key environmental advisers from different countries, including U.N. Secretary General Ban Ki moon and Professor Jeffrey Sachs who are notorious advocates of abortion that operate at the highest levels of the United Nations. The summit was intended to shape the pope's forthcoming encyclical on climate change, Laudato Si': On Care for our Common Home, which in turn would pave the way for the December 8 light show bearing a similar name, Illuminating our Common Home.

St. Paul warned of “the operation of error to believe lying” that would bewitch mankind in the latter days (2 Thess. 2:10), and if Rome has now stooped so low as to cast off tradition and consort with the enemies of God, it is evident that St. Paul's prophecy is unfolding.

And of course, there is the prophecy of Our Lady at La Salette in 1846: “Rome will lose the Faith and will become the seat of Antichrist.” This prophecy may well reference not a person, but a new order of evil that would reign in the Eternal City.

We pray that Pope Francis will make an about-face and return to the rule of Apostolic Tradition that has worked for the salvation of souls for 2000 years. Let him ponder the words of Holy Scripture: "Prove all things; hold fast that which is good." (1 Thessalonians 5:21)

[Comment Guidelines - Click to view]
The Remnant values the comments and input of our visitors. It’s no secret, however, that trolls exist, and trolls can do a lot of damage to a brand. Therefore, our comments are heavily monitored 24/7 by Remnant moderators around the country.  They have been instructed to remove demeaning, hostile, needlessly combative, racist, Christophobic comments, and streams not related to the storyline. Multiple comments from one person under a story are also discouraged. Capitalized sentences or comments will be removed (Internet shouting).
The Remnant comments sections are not designed for frequent personal blogging, on-going debates or theological or other disputes between commenters. Please understand that we pay our writers to defend The Remnant’s editorial positions. We thus acknowledge no moral obligation whatsoever to allow anyone and everyone to try to undermine our editorial policy and create a general nuisance on our website.  Therefore, Remnant moderators reserve the right to edit or remove comments, and comments do not necessarily represent the views of The Remnant.
back to top
Last modified on Monday, December 7, 2015
Tweet