An Open Letter to Bill Donohue 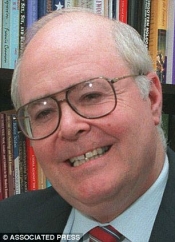 Bill Donohue
“These crazies are mad at Wuerl because he doesn’t believe in using the Eucharist as a weapon to smack liberal Catholic politicians. Wuerl has said that the refusal of Holy Communion “should be made only after clear efforts to persuade and convince the person that their actions are wrong and bear moral consequences.” Exactly. Wuerl is a great gift to the Catholic Church. These critics are as ignorant as they are malicious.” . . . Bill Donohue, “RIGHT-WING NUTS RIP CARDINAL WUERL”

You have publicly stumbled (I hope it was an unwitting stumble) into endorsing, quite explicitly, a mortal sin.

The mortal sin in question is: giving Communion to a person who is obstinately persisting in manifest grave sin. It is a grave sin of scandal because whenever a minister of Communion gives such a person Communion, he: 1) publicly collaborates, with knowledge, in the commission of a sacrilege; 2) gives public approval to the communicant's notorious grave sin.


You are, of course, aware that these are the precise reasons the Church has always required Denial of Communion to persons living publicly in a state of adultery.

The principle involved applies equally without any regard to the SPECIES of the sin that the would-be communicant is involved in.

Your blunder is in thinking that the moral principle demanding Denial of Communion has some specific connection with the Sacrament of Matrimony. I.e., the divorced-and-remarried.

This is a bit of nonsense that the majority of American bishops have promoted, by approving the document "Catholics in Political Life," in which it is said that a bishop may "legitimately" give Communion to pro-abortion politicians i.e., the bishops said (and say) that the moral principles that MANDATE Denial of Communion to the divorced-and-remarried do not mandate Denial of Communion to public promoters of abortion.

Cardinal Wuerl's many statements on this subject have been nothing but a concatenation of lies. (In the case of a Cardinal of the Catholic Church, one cannot attribute them to ignorance.)

He has persistently outlined the demands of Canon 916, and pretended he is talking about Canon 915, i.e., he has persistently pretended that ONLY the would-be communicant has anything to say about whether he will receive Communion. (Of course, the Cardinal is secure in the knowledge that Joe Lunchpail and Sally Housecoat are not familiar with the texts of Canons 915 and 916.)

He has persistently claimed that Denial of Communion is unjust unless the minister of Communion knows the "state of the soul" of the would-be communicant.

Since this is metaphysically impossible...well, you can finish this sentence.

Cardinal Wuerl has declared that he will never deny Communion to anyone other than an excommunicate. (And even then...only after lots and lots of "dialogue.")

Cardinal Wuerl claimed several years ago that, before he would consider obeying Canon 915, it was necessary to find out whether the canon was written for the precise purpose of "bringing politicians to heel."

The Cardinal had to know that NO canon was written for that precise purpose, ergo...you can finish this sentence, also.

He persistently calls Denial of Communion a "penalty."

The reason for falsely calling Denial of Communion a "penalty" is to support the false claim that it is something that a bishop MAY "impose," but Cardinal Wuerl chooses not to "impose," for assorted "pastoral" reasons, such as "leading" pro-abortion politicians into closer union with Christ and the Church.

When asked not long ago in an interview to name a pro-abortion politician who had become pro-life as a result of receiving Communion sacrilegiously in tandem with "dialogue" with Cardinal Wuerl, he could not name one. (It has been more than 43 years since the platform of "the natural home of Catholics" endorsed abortion, and nearly 43 years since Roe v. Wade.)

You, Mr. Donohue, have parroted Cardinal Wuerl's caricature of Denial of Communion as "using the Eucharist as a weapon" with which to "smack" pro-abortion politicians.

Well, then, you therefore accuse Pope St. John Paul II of "using the Eucharist as a weapon," with which to "smack" the divorced-and-remarried--in a Magisterial document! (Familiaris Consortio.)

I hope I need hardly elaborate on the grave scandal that is given, and the strict, grave obligation to correct it, when the President of the Catholic League has publicly, in writing, endorsed the commission of mortal sin.

[Comment Guidelines - Click to view]
The Remnant values the comments and input of our visitors. It’s no secret, however, that trolls exist, and trolls can do a lot of damage to a brand. Therefore, our comments are heavily monitored 24/7 by Remnant moderators around the country.  They have been instructed to remove demeaning, hostile, needlessly combative, racist, Christophobic comments, and streams not related to the storyline. Multiple comments from one person under a story are also discouraged. Capitalized sentences or comments will be removed (Internet shouting).
The Remnant comments sections are not designed for frequent personal blogging, on-going debates or theological or other disputes between commenters. Please understand that we pay our writers to defend The Remnant’s editorial positions. We thus acknowledge no moral obligation whatsoever to allow anyone and everyone to try to undermine our editorial policy and create a general nuisance on our website.  Therefore, Remnant moderators reserve the right to edit or remove comments, and comments do not necessarily represent the views of The Remnant.
back to top
Tweet
More in this category: « An Urgent Message to Pope Francis Pope Francis: The Great Clarifier »