When You See the Abomination of Desolation, Run for the Hills, Folks! Featured 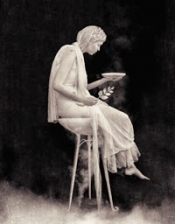 Thoughts on the last Sunday of the year...

This morning I woke up to two surprises. As usual, I staggered blearily off to the kitchen to give the kitties their breakfast, put the coffee on and went out for my daily breath of fresh air while it was perking. Every morning this little ritual reminds me where I am – the ancient town of Norcia in the mysterious Valnerina – and why I live here. I stand on my front step and look out at the valley, the trees, the sheep pasture at the bottom and the fields stretching up the lower slopes of the mountains on the opposite side. I look at it and let it sink in, listen to the birds, breathe in the clean air, think about how ancient this place is and how many wars and fears have come and gone and left almost no mark on its people.

Today, I hugged my coffee cup to my chest as I stood, because it was cold. So cold that the peaks and upper slopes were covered in white. Not much, but enough that it meant the winter had come, and with it our town’s quiet, peaceful time. The last of the tourists will go away and it will be just us and the sheep and the cows and the ravens and wild boar, and perhaps the occasional wolf.

Then I went in and, because it was still early, and because I’m apparently a sucker for punishment, I looked at the internet to see what was going on in the outside world. The first thing I came upon was an FBI security alert warning American tourists to stay away from St. Peter’s Basilica and other “high profile targets” in Rome today. Today is significant to ISIS because, in the Novusordo Church at least, it is the Feast of Christ the King. They know what that means, even if most of us have forgotten.

The news talked about eight potential “coordinated attacks” on targets in major European cities. Lovely. Most of my closest friends live and/or work within yards of St. Peter’s, and nearly all of them go to Mass a few blocks away.

Thus it was, filled with a combination of irritation and dread, I put on my boots and woolie coat and stomped crankily off to the last Mass of the liturgical year. Father’s homily was appropriately somber:

When therefore you shall see the abomination of desolation, which was spoken of by Daniel the prophet, standing in the holy place: he that readeth let him understand.
Then they that are in Judea, let them flee to the mountains:
And he that is on the housetop, let him not come down to take any thing out of his house:
And he that is in the field, let him not go back to take his coat.
And woe to them that are with child, and that give suck in those days.
But pray that your flight be not in the winter, or on the Sabbath.

Every Sunday I have another little ritual. After Mass I go to the Enoteca Granaro del Monte on the corso to have my tea. I have become a regular there, and the two chaps who work the Sunday shift have, after a year of careful tutoring, learned how to make a decent cup of tea and they give me toast and home made jam. I usually bring my book with me to write in. I’m sitting there right now, looking through previous entries:

“Sunday, September 13. Tomorrow is the Feast of the Exaltation of the Holy Cross. Someone pointed out how strange it is that 14 years after 9-11, the pope is trying to convince Christendom to surrender to the Jihadists. How quickly the world has become so strange, so surreal.”

In the first few years of my work for the pro-life movement, “we knew that something terrible was coming. After 9-11 we all started to get an idea exactly what shape that terrible something was going to take. And now we are watching the Hijrah in the Mediterranean. And even stranger, I am here on its doorstep and the hordes of violent invaders are not entirely passing by.”

Since September, things in the world have come to such a pass that the first thing I do on the internet is no longer check Facebook to see how my buddies are doing. It’s to check Drudge to see if the next attack has come.

The month of November, apart from it being the month of the Holy Souls in the Church, has been Ancient History Documentary month at Hilaryhouse. Immediately after the close of the Synod I came down with a furious bout of the flu, and have done little other than sleep, cough and watch documentaries on YouTube. It hasn’t been a complete waste, however. The other night I finished what was possibly the longest article I’ve ever written, comparing the situation in the Late Bronze Age Collapse to our own.

What prompted Hilary to write perhaps her longest article to date?
Find out in the next print-edition of The Remnant.


Another documentary caught my attention, all about the great Oracle of Delphi, a temple of the god Apollo in Greece, which for a thousand years or more was one of the most important places in the ancient world, until earthquakes closed the underground vents from which had issued the “vapours” that sent the Pythia into her trance. Everyone, from common people to the great and famous would go to her for answers to their difficulties and conundrums. Some of her answers are famous and have figured prominently in the histories.

The Oracle was in fact a young woman, called “the Pythia,” who would sit in her chamber up high on a three-legged bronze seat, perched over what we would now call a geothermic vent from which “vapours,” intoxicating gases, emitted that would send her into a trance. The petitioners’ questions would be read to her and she would babble an incomprehensible response. Then the priests of Apollo standing by would “interpret” her utterances. As an aside, the whole thing reminded me quite sharply of our own current situation in the Church. The documentary’s narrator summed up this pontificate quite well, in fact: “The Oracle’s cryptic answers made it possible for her to be right most of the time. If inquirers got the wrong interpretation that was their fault.”

It occurred to me after two straight weeks of documentaries that one of the reasons the ancient world is so fascinating is perhaps that ancient peoples were so very much like us, like believing Catholics, in their outlook, with their lives oriented towards the supernatural. In fact, I’m guessing that the more of a Modern you are, the stranger and more foreign the ancient world would seem. In the minds of these various peoples, the reality of the … “otherworld” I suppose we could call it … was every bit as real as the quotidian reality of their work and social structures, just as it is for us.

They may have been way off on most of the details, but this foundational supernatural outlook and how it informed their daily lives, was something for which I can find a lot of sympathy. The idea of pure materialism, the anti-transcendentalist, “flat-earth,” flat-universe theory of the moderns, the Darwinians and secularists of our time, would have been as foreign to them as it is now to us. It seems strange to say that I find more in common with a Bronze Age petitioner at the Delphic Oracle than I do with my contemporary atheistic European politician or news reporters.

This brings me back to the warning issued last night by an online hacker/activist group, identified only as “Anonymous,” who listed “Feast of Christ the King celebrations (Rome/Worldwide)” as being among those under direct threat today.

After Mass, I told Father what I had read on the news aggregators in the morning. We agreed that it was an appropriate accompaniment to the readings. But how strange it is that the only people who seem to really understand what is going on are the terrorists themselves – who are clear that they are waging war on Christendom and the Catholic Church’s ancient claims to temporal supremacy – and the Traditionalists, who are the only Catholics remaining in the Church who still understand what that means. Nearly everyone else will miss the point.

It is after 4:30 pm here, and so far I have had no messages from any of my Rome friends of anything untoward in the City, thanks be to God.

Father said, “We’re going to have to start expecting this more and more. We have to be prepared.” He meant, of course, to be spiritually prepared. To live every day as though it could be our last. But to do what is necessary to be prepared for eternity, we must also start preparing ourselves psychologically. We have to get our heads around this. It is our new reality.

[Comment Guidelines - Click to view]
The Remnant values the comments and input of our visitors. It’s no secret, however, that trolls exist, and trolls can do a lot of damage to a brand. Therefore, our comments are heavily monitored 24/7 by Remnant moderators around the country.  They have been instructed to remove demeaning, hostile, needlessly combative, racist, Christophobic comments, and streams not related to the storyline. Multiple comments from one person under a story are also discouraged. Capitalized sentences or comments will be removed (Internet shouting).
The Remnant comments sections are not designed for frequent personal blogging, on-going debates or theological or other disputes between commenters. Please understand that we pay our writers to defend The Remnant’s editorial positions. We thus acknowledge no moral obligation whatsoever to allow anyone and everyone to try to undermine our editorial policy and create a general nuisance on our website.  Therefore, Remnant moderators reserve the right to edit or remove comments, and comments do not necessarily represent the views of The Remnant.
back to top
Last modified on Sunday, November 22, 2015
Tweet