Why Won't Pope Francis Remind the World of What Really Matters... as NatGeo Just Did?

This today from NationalGeographic.com:

How the Virgin Mary Became the World’s Most Powerful Woman

Mary barely speaks in the New Testament, but her image and legacy are found and celebrated around the world.

"Praying for the Virgin Mary’s intercession and being devoted to her are a global phenomenon. The notion of Mary as intercessor with Jesus begins with the miracle of the wine at the wedding at Cana, when, according to the Gospel of John, she tells him, “They have no wine,” thus prompting his first miracle. 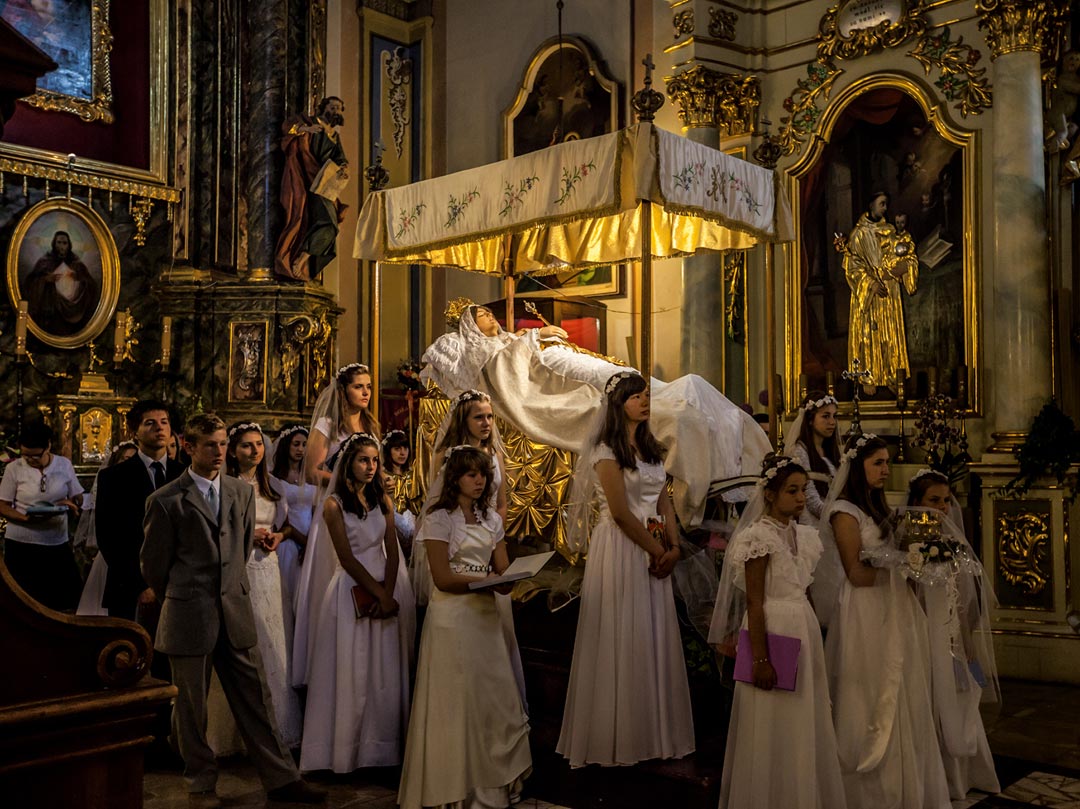 Mary is a magnet for young and old. On August 12, during a Mass celebrating her assumption into heaven, Roman Catholic youths guard a life-size figure in Kalwaria Pacławska, Poland. The Feast of the Assumption is a weeklong festival here.

"It was in A.D. 431, at the Third Ecumenical Council, in Ephesus, that she was officially named Theotokos, Bearer of God. Since then no other woman has been as exalted as Mary. As a universal symbol of maternal love, as well as of suffering and sacrifice, Mary is often the touchstone of our longing for meaning, a more accessible link to the supernatural than formal church teachings. Her mantle offers both security and protection. Pope Francis, when once asked what Mary meant to him, answered, “She is my mamá.”

"Her reported appearances, visions experienced often by very poor children living in remote or conflict-wracked areas, have intensified her mystery and aura. And when the children can’t be shaken from their stories—especially if the accounts are accompanied by inexplicable “signs” such as spinning suns or gushing springs—her wonder grows.

Mary is everywhere: Marigolds are named for her. Hail Mary passes save football games. The image in Mexico of Our Lady of Guadalupe is one of the most reproduced female likenesses ever. Mary draws millions each year to shrines such as Fátima, in Portugal, and Knock, in Ireland, sustaining religious tourism estimated to be worth billions of dollars a year and providing thousands of jobs. She inspired the creation of many great works of art and architecture (Michelangelo’s “Pietà,” Notre Dame Cathedral), as well as poetry, liturgy, and music (Monteverdi’s Vespers for the Blessed Virgin). And she is the spiritual confidante of billions of people, no matter how isolated or forgotten. READ STORY HERE


REMNANT COMMENT: Obviously, this report's inclusion of Medjugorje is most unfortunate. But I'd ask readers to look beyond that for a moment in order to consider the bigger picture emerging. Given that it is the work of a multi-billion-dollar secular organization, this development is most significant, despite obvious flaws in its details.

We're posting this story not so much because of what it is saying but because of who is saying it, as well as the subject matter of the report. There seems to be a certain apocalyptic (in the good sense) edge to this, as if even National Geographic somehow suspects that Our Lady will never be put down, will never be crushed, will never fade into the mists of a New World Order. As the world falls further and further into hell, she emerges stronger than ever.

No matter what happens, Mary the Mother of God and the mother of all men, is with us for the duration—even National Geographic senses this reality and finds it remarkable, despite a lack of clear understanding of who and what she really is.

I take comfort in this. Enough of the modernist gibberish of Vatican II. Enough of the Bergoglio Road Show to nowhere.  All of the confusion and chaos we see before us now rests on rapidly shifting sands. It cannot last.

For us, then—all of us—it's Operation Survival, where the remnant of old Christendom will recognize what’s happening but stop being scandalized by it, and instead resolve to hold fast to the mantle of Our Lady and to outlive the moral and spiritual anarchy that is now enveloping the whole world.

She is standing right above us now, arms reaching down to save us; and if Pope Francis and the new Church are too blind to see her, so be it!  Let’s take heart in the fact that National Geographic not only sees her standing right there, but feels compelled to point her out to a world hell-bent on destroying itself.

We’re beyond scandal now. There’s no pressing need to “expose” the pathetic shenanigans going on inside the Vatican anymore—all of which were inevitable anyway. We know where they stand and we know where we stand, and we will not despair or be surprised by the atrocities we have to witness for a while longer.

Even if they make martyrs of the best and the strongest among us, we will see to it that our children outlast the modern crucifiers of Christ. By keeping the old Faith, our children will live to see what we likely will not—the fall of the new world order and the rise of the old one, founded on Christ the King and the restoration of holy Christendom.

A renaissance of the old Faith, the old Mass and the old Religion is coming. Of this there can be no doubt. And the seemingly all-powerful tyrants that rule our Church and our world are powerless over us if we keep the Faith and stay close to the Mother of God.

So let’s do that then. Let’s live. Let’s persevere. Let’s pray. Let’s believe. And let’s outlive them all. God help us, nothing else matters.

Our Lady conceived without sin, pray for us who have recourse to thee.

[Comment Guidelines - Click to view]
The Remnant values the comments and input of our visitors. It’s no secret, however, that trolls exist, and trolls can do a lot of damage to a brand. Therefore, our comments are heavily monitored 24/7 by Remnant moderators around the country.  They have been instructed to remove demeaning, hostile, needlessly combative, racist, Christophobic comments, and streams not related to the storyline. Multiple comments from one person under a story are also discouraged. Capitalized sentences or comments will be removed (Internet shouting).
The Remnant comments sections are not designed for frequent personal blogging, on-going debates or theological or other disputes between commenters. Please understand that we pay our writers to defend The Remnant’s editorial positions. We thus acknowledge no moral obligation whatsoever to allow anyone and everyone to try to undermine our editorial policy and create a general nuisance on our website.  Therefore, Remnant moderators reserve the right to edit or remove comments, and comments do not necessarily represent the views of The Remnant.
back to top
Last modified on Wednesday, November 11, 2015
Tweet

More in this category: « "Wake Up!" The Rock of Peter is a Rolling Stone Heart, Give Me Thy Son – A Vocation Story Update »