"Wake Up!" The Rock of Peter is a Rolling Stone Featured 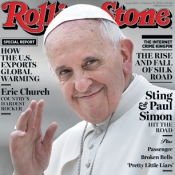 A whole slew of the doctrine-lite and emotion-overload homilies of Pope Francis have found their way into the Pope's first rock-pop album released in Italy last Friday (November 6, 2015).

The ghastly thing is called “Wake Up!”, which somehow seems appropriate given that it should serve as a fairly effective wake-up call for Catholics everywhere.

That’s right, time to wake up to the fact that the Catholic Church has suffered a coup d’état at the highest levels and that the bride of Christ now finds herself held hostage by a cabal of modernists who intend to permanently disfigure her face, refashioning it in the image and likeness of the modern world.

The Catholic-bashing Rolling Stone magazine is all “down with this”, of course, noting on its website that it is “proud to premiere” Wake Up! by Pope Francis. The magazine  enthusiastically promotes a couple of tracks as teasers for the 11-track Vatican-approved extravaganza of screaming guitars, Latin rhythms, hip-hop beats and papal rap.

Hold on, Jimmy!  Its editors say nothing at all about being moved by the Pope's teachings and homilies to amend their ways or follow Christ. Just the opposite, in fact. Rolling Stones hails Francis for moving beyond those antiquated and divisive teachings of the Church that are so detested by cool kids everywhere, in the Church and out:

On Wake Up!, Pope Francis speaks to the listener in Italian, English, Spanish and Portuguese over 11 tracks to address issues like peace, dignity, environmental concerns and helping those most in need. . .

It's Pope Francis' belief that every person should be treated with love and respect, a message that has made him universally loved after critics chastised the Catholic Church for alienating its base and the world outside the Vatican with hardened views.

Ah, yes, those “hardened views” of Holy Mother Church, so obscene to the enlightened ones at Rolling Stone magazine. Those hateful rules. Those evil dogmas. Those Catholic fundamentals rightly abominated by cultural revolutionaries everywhere and now, according to Rolling Stone, abandoned and shunned by Pope Francis.

The Catholic Church finally "got with it, man!"

'We love this pope', says the magazine that's been cranking out Christophobic rot since November 9, 1967.

Can you see it-- I mean, that little white flag flying high over St. Peter’s in Rome? It’s the flag of surrender in the global culture war, and like Jagger and Bowie, the world, the flesh and the devil are dancin' in the street.

What else needs to be said about this disastrous pontificate but that it’s most enthusiastic support comes from the most outspoken critics of Catholic moral theology in the world today.

Well, it's better than Miley. Right? Please,  let's wake up, shall we?  "Wake Up!" is the soundtrack for the ongoing abomination of desolation in the Church. If Catholics are not particularly bothered by this--well, God help them. Their brainwashing training session is nearly complete, and they're now graduating into the New Church. They've lost their sensus catholicus completely, and all they have to do now is ignore the following mumbo-jumbo and keep on rockin' in the real world:

[Comment Guidelines - Click to view]
The Remnant values the comments and input of our visitors. It’s no secret, however, that trolls exist, and trolls can do a lot of damage to a brand. Therefore, our comments are heavily monitored 24/7 by Remnant moderators around the country.  They have been instructed to remove demeaning, hostile, needlessly combative, racist, Christophobic comments, and streams not related to the storyline. Multiple comments from one person under a story are also discouraged. Capitalized sentences or comments will be removed (Internet shouting).
The Remnant comments sections are not designed for frequent personal blogging, on-going debates or theological or other disputes between commenters. Please understand that we pay our writers to defend The Remnant’s editorial positions. We thus acknowledge no moral obligation whatsoever to allow anyone and everyone to try to undermine our editorial policy and create a general nuisance on our website.  Therefore, Remnant moderators reserve the right to edit or remove comments, and comments do not necessarily represent the views of The Remnant.
back to top
Last modified on Monday, November 9, 2015
Tweet

More in this category: « Theology and Depression: Only the Real Counts Why Won't Pope Francis Remind the World of What Really Matters... as NatGeo Just Did? »