Missing Children at the Family Synod 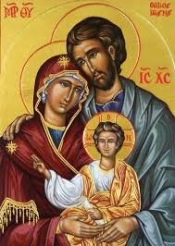 “The sin of the century is the sin against the child. More children have been willfully killed by adults during the last hundred years than in the whole preceding history of the human race."  ~John Saward, The Way of the Lamb.

The Synod on the Family is dominated by talk of homosexuals, accompaniment, divorced adults, remarried adults, decentralization, but barely a mention of the divine purpose of family: children.

Like barren Europe, children are missing at the Synod on the Family.


Among the rare, but surpris ing blessings surrounding this contentious and troubling Family Synod is the Open Letter to the Synod from 100 Converts to the Catholic Faith. The voice of these converts resonates and resounds bringing into sharp contrast the hollow and heretical musings from some of the Synodal fathers.

In the “Open Letter to the Synod from over 100 Converts” the converts beg the Pope and Synod Fathers “to uphold Christ’s teaching on the indissolubility of marriage with the same fidelity, the same joyful and courageous witness the Catholic Church has displayed throughout her entire history.” The signatories expressed to the Synod that the Catholic doctrine and teaching on marriage and sexuality drew them into the truth of the Faith as converts.

Among the many brilliant Catholic converts who signed the letter to the Pope urging them to uphold the tenets of the Catholic doctrine on Marriage and Family is Rev. John Saward, a former Anglican clergyman, now a Priest-in-charge at SS. Gregory and Augustine, also an Oxford Fellow at Blackfriars Hall, Oxford University.

Saward possesses a keen understanding of the challenges facing the Catholic Church in this modern era. His insight and approach to this moral crisis, is profoundly Catholic and theological, yet ironically missing from the discussions at the Synod. Saward points to the Child Jesus, and the Child in the family as the way to heaven.

In Saward’s compelling book, The Way of the Lamb, The Spirit of Childhood and the End of the Age (Ignatius Press) he forthrightly underscores the root causes of the moral corruption of modernity in the first line of his book as he boldly asserts:


“The modern western world seems to have declared war on the family in all its numbers. It is destructive of the child, disparaging of the mother, and derisive of the father.”

This Catholic convert recognizes the causes of the deterioration of civilization and the family with clarity and courage. Saward accurately assesses the state of modern civilization as he takes aim at the sacred cows of contraception and homosexuality:

“ In societies dedicated to the pursuit of unrestrained sexual pleasure, the child has become an obstacle to be circumvented, even an enemy to be destroyed. The dominant contraceptive mentality is intrinsically contra-child, for the contracepting person wills a child, not to be.”

The cult of homosexuality, too, is a practical hatred of the child, because it is the rejection of woman and therefore the fruit of her womb, an ultimate compact with sterility and death.”

First, the German Cardinal (‘We are not a subsidiary of Rome’) Marx presumptively infers the words of God: "If a same-sex couple are faithful, care for one another and intend to stay together for life God won't say 'All that doesn't interest me, I'm only interested in your sexual orientation.' That is impossible and it is an issue we must discuss -- but it won't be a main subject at this synod.”

Throughout the Synod, the issue of homosexuality dominates the Synod Fathers’ media appearances. They exhibit a longing desperation for relevance and acceptance by secular society.

Take for example, the omnipresent Papal appointee and English language attaché, Father Thomas Rosica of Salt and Life TV. Spreading more salt than light on the discussions, Rosica sternly lectures that the need to end “exclusionary language” (of homosexuality) and that the discussions in the Synod should “embrace reality as it is and not be afraid of new and complex situations.” Again, the secular theme of reality, albeit a fractional minority, prevails at the Synod media scrum, rather than the preeminence of eternity.

Fr. Rosica is particularly focused on “homosexuals or gay persons,” saying “we don’t pity gay persons, but we recognize them for who they are — they are our sons and daughters and brothers and neighbors and colleagues.” Later at the press conference, he returned to the subject of homosexual relationships, saying the subject “came up several times” and that a synod father asked, “How do we speak about them and offer a hand of welcome to them?” Rosica sounds more like a welcoming Rotary Club president, than an ordained priest of the Catholic Church responsible for the salvation of souls.

More modernists ministers were waiting in the wings, ready to pounce! Enter the personal papal Synodal appointee, Archbishop Blase Cupich of Chicago who also seems to focus on the secular agenda of 1-2% of the population that is homosexual. His statements at the Vatican press conference implied his preference for a pathway for communion for homosexual couples. Apparently, the Catechism of the Catholic Church and doctrine has been replace by the modern “inviolable” conscience.

So amid the rush toward and noise of the Synod’s dialoguing agenda, the precious child, the heart of the family, is at risk of extinction. This troubling, but inevitable development can be blamed on a papacy that immediately welcomed UN population control experts and a globalist agenda that promotes population control through abortion, sterilization and contraception and UN gender ideology policies.

The children are missing, as they have been in the first two years of this pontificate. Francis promotes and schemes with the modernists about the climate, gender ideology, income redistribution, and exclusion, to name just a few. It is no surprise then that the child has been banished from the Synod, except for kissing baby photo ops.

Instead of offering a Christocentric and Catholic approach to the world, the Synod appears to be desperately accommodating the modern western world, ceding to its irrational anti-child demands and influences. Saward invokes the Catholicity of G.K. Chesterton, ironically in his classic work, Heretics, as the only proper Catholic response to the crisis in the family and modernity. Fawning bishops seeking modernity’s approval and acclaim, won’t like this message.

“A man who has faith, must be prepared not only to be a martyr, but to be a fool. It is absurd to say that a man is ready to toil and die for his conviction when he is not even ready to wear a wreath round his head for them.” G.K. Chesterton, Heretics

Time is running out. The children are missing. They need a Father.

[Comment Guidelines - Click to view]
The Remnant values the comments and input of our visitors. It’s no secret, however, that trolls exist, and trolls can do a lot of damage to a brand. Therefore, our comments are heavily monitored 24/7 by Remnant moderators around the country.  They have been instructed to remove demeaning, hostile, needlessly combative, racist, Christophobic comments, and streams not related to the storyline. Multiple comments from one person under a story are also discouraged. Capitalized sentences or comments will be removed (Internet shouting).
The Remnant comments sections are not designed for frequent personal blogging, on-going debates or theological or other disputes between commenters. Please understand that we pay our writers to defend The Remnant’s editorial positions. We thus acknowledge no moral obligation whatsoever to allow anyone and everyone to try to undermine our editorial policy and create a general nuisance on our website.  Therefore, Remnant moderators reserve the right to edit or remove comments, and comments do not necessarily represent the views of The Remnant.
back to top
Read 4315 times Last modified on Friday, October 23, 2015
Tweet

More in this category: « An Appeal for Stability and Calm in an Unquiet Sea Dear Unbelieving and Innovating Bishops, »