Punch Him Out! (A St. Nicholas Moment at the Synod on the Family) 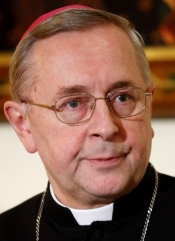 As the Benny Hill show (aka the Synod on the Family) continues, it is being reported by Arcbhishop Gadecki that Jose Luiz Cardinal Lacunza Maestrojuan, president of the Panamanian Bishops' Conference and appointed by Pope Francis as a synod rapporteur, proposed that the church should throw out the teachings of Jesus on divorce and remarriage, by, get this…returning to the Law of Moses on the matter. The quote, provided by Rorate Caeli, is as follows:

"Moses drew near to the people and gave way. Likewise today, the 'hardness of hearts' opposes God's plan. Could Peter not be merciful like Moses?"

Let it be known, this is nothing less than a call to apostasy. In fact, to cast aside the teachings of Christ and return to the Law of Moses is the very first example of apostasy in the New Testament and it wasn't looked at too kindly either (see Hebrews 6:4-8). For this reason, it would appear Maestrojuan would have the church be the kind of apostate of whom it is written:

“But there were also false prophets among the people, just as there will be false teachers among you. They will secretly introduce destructive heresies, even denying the sovereign Lord who bought them [Jesus]--bringing swift destruction on themselves.” (2 Peter 2:1, Emphasis mine)

And of whom it is also written in the Epistle to the Galatians:

“But even if we or an angel from heaven should preach a gospel other than the one we preached to you, let them be under God's curse!” (Galatians 1:8)

In the same epistle, Paul warns the Galatians about the danger of returning to the Law of Moses, after having received Christ, saying:

“You who are trying to be justified by the law have been alienated from Christ; you have fallen away from grace.” (Galatians 5:4)

To dare imply the church should abandon the teachings of Christ and return to the Law of Moses on the matter of marriage is pure apostasy. Men who say such things are depraved enemies who are under God’s curse.

Here is the $64,000 question: Why didn’t Pope Francis, or any other bishop present at this intervention, walk up to Cardinal Maestrojuan and punch him right in the face like St. Nicholas did to the heresiarch Arius at the Council of Nicaea? This should have been a “St. Nicholas” moment!

Whatever happened to righteous indignation? How anyone could sit there and listen to such vomit from Satan, without sparking an uproar, shows how weak the current men in the hierarchy are. In days of old, this man wouldn’t have walked out of such an intervention unscathed. These days, I suspect the Holy Father will give him a promotion.

[Comment Guidelines - Click to view]
The Remnant values the comments and input of our visitors. It’s no secret, however, that trolls exist, and trolls can do a lot of damage to a brand. Therefore, our comments are heavily monitored 24/7 by Remnant moderators around the country.  They have been instructed to remove demeaning, hostile, needlessly combative, racist, Christophobic comments, and streams not related to the storyline. Multiple comments from one person under a story are also discouraged. Capitalized sentences or comments will be removed (Internet shouting).
The Remnant comments sections are not designed for frequent personal blogging, on-going debates or theological or other disputes between commenters. Please understand that we pay our writers to defend The Remnant’s editorial positions. We thus acknowledge no moral obligation whatsoever to allow anyone and everyone to try to undermine our editorial policy and create a general nuisance on our website.  Therefore, Remnant moderators reserve the right to edit or remove comments, and comments do not necessarily represent the views of The Remnant.
back to top
Last modified on Thursday, October 8, 2015
Tweet
More in this category: « Catholic Identity Crisis in Minnesota Schools First Italian National Summorum Pontificum Pilgrimage to Norcia’s Benedictine Monastery »