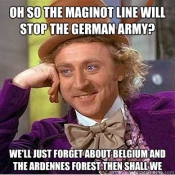 After the experience of the First World War, French military geniuses (who’d long since abandoned their good Catholic sense), stuffed full of wine, cheese, and hubris, built a famous line of fortifications in the east intended to prevent Germany from invading again. They built a line of fixed fortifications, strong and sturdy.

When completed in the 1930’s, these French military geniuses congratulated themselves on their foresight and sagacity, convinced that they had prevented another invasion from Germany from the east.

The Germans simply invaded France from the north. They simply went around the Maginot line. It seems the French military geniuses never thought of that.


I am reminded of the famous Maginot line today as I saw a flurry of stories these past days about how the “conservatives” are standing up at the synod, closing the door to this or that innovation in doctrine. Case in point, Cardinal Vingt-Trois (fittingly a French Cardinal) said that those expecting “spectacular change” of Church doctrine will be disappointed.

We see breathless stories from those who would like nothing more than spectacular change, crowing how the “Conservatives Struck First”

In his 7,000-word opening address on Monday morning, intended to set the tone for the synod’s work, Erdő seemed determined to close a series of doors that many people believed the last synod had left open — beginning with the controversial proposal of German Cardinal Walter Kasper to allow divorced and civilly remarried Catholics to return to Communion.

That Communion ban, Erdő insisted, is not an “arbitrary prohibition” but “intrinsic” to the nature of marriage as a permanent union. Mercy, he said, doesn’t just offer the possibility of forgiveness, it also “demands conversion.”

The conservatives are ready this time; they will not allow Germany to invade from the east again!!

Uh. Guess what? They saw you building these defenses last year and they have decided to go around.

None of these speeches matter. None of these discussions matter. They have already hand-picked those administrators writing the closing statement, which by all accounts is already under development.

As for the rest, all power remains with the Pope. The synod fathers can say whatever they want. It will have little or no impact on the final document or upon what the Holy Father will ultimately decide.

Further, we all know that the true threat here is no direct contradiction of Catholic teaching by the synod or the Pope. The real dangers are opening the doors of innovation on pastoral practice that undermine the very doctrine they hold as unchangeable. You have to be a fool or a French military genius to think that the front line of this war is doctrinal.

All is being setup this way, even by those ‘conservatives’ so highly touted now. For every nugget of opposition to innovation you hear, there is a boulder of exhortation to unity and avoiding division, with the Pope, of course, cited as the source and font of unity, the theme being "The Pope is the guarantor of orthodoxy and union." The changes to rule and rhetoric show us that front lines of this battle are not where the “conservatives” imagined they would be. They are setting up the most papalist Synod in centuries. But it is not ultramontane papalism, but pure papal positivism.

Whatever pastoral door is opened, we must all walk through it, they will argue, for to do otherwise is to break with unity.

The Pope IS THE SYNOD.

Pray for the pope.

[Comment Guidelines - Click to view]
The Remnant values the comments and input of our visitors. It’s no secret, however, that trolls exist, and trolls can do a lot of damage to a brand. Therefore, our comments are heavily monitored 24/7 by Remnant moderators around the country.  They have been instructed to remove demeaning, hostile, needlessly combative, racist, Christophobic comments, and streams not related to the storyline. Multiple comments from one person under a story are also discouraged. Capitalized sentences or comments will be removed (Internet shouting).
The Remnant comments sections are not designed for frequent personal blogging, on-going debates or theological or other disputes between commenters. Please understand that we pay our writers to defend The Remnant’s editorial positions. We thus acknowledge no moral obligation whatsoever to allow anyone and everyone to try to undermine our editorial policy and create a general nuisance on our website.  Therefore, Remnant moderators reserve the right to edit or remove comments, and comments do not necessarily represent the views of The Remnant.
back to top
Last modified on Tuesday, October 6, 2015
Tweet

More in this category: « The Real Fruits of Vatican II: Scandal in the Holy Office Catholic Identity Crisis in Minnesota Schools »