St. Gallen’s “Mafia”: Answering Those Who Are Questioning the Validity of the Election of Pope Francis 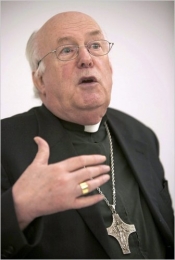 Cardinal Godfried Danneels
Catholics are in a frenzy questioning the validity of the election of Pope Francis because of recent news, from Edward Pentin, which indicates Cardinal Danneels, among others, were part of a secret group that conspired outside of a papal conclave to elect Pope Francis. Pentin says:

"At the launch of the book in Brussels this week, the cardinal said he was part of a secret club of cardinals opposed to Pope Benedict XVI. He called it a "mafia" club that bore the name of St. Gallen. The group wanted a drastic reform of the Church, to make it "much more modern", and for Cardinal Jorge Bergoglio to head it. The group, which also comprised Cardinal Walter Kasper and the late Jesuit Cardinal Carlo Maria Martini, has been documented in Austen Ivereigh's biography of Pope Francis, The Great Reformer."


This has caused panic in some Catholic circles since John Paul II said:

"The Cardinal electors shall further abstain from any form of pact, agreement, promise or other commitment of any kind which could oblige them to give or deny their vote to a person or persons. If this were in fact done, even under oath, I decree that such a commitment shall be null and void and that no one shall be bound to observe it; and I hereby impose the penalty of excommunication latae sententiae upon those who violate this prohibition. It is not my intention however to forbid, during the period in which the See is vacant, the exchange of views concerning the election."

There are two brief points I would like to make:

1.      First, the quote from John Paul II excommunicates the cardinals who conspired to elect another cardinal, not necessarily the one being elected.

2.      Second, even if the one elected was actively part of the agreement and was excommunicated, Pope Pius XII decreed that an excommunicated cardinal can be elected Pope, saying:

"None of the Cardinals may in any way, or by pretext or reason of any excommunication, suspension, or interdict whatsoever, or of any other ecclesiastical impediment, be excluded from the active and passive election of the Supreme Pontiff. We hereby suspend such censures solely for the purposes of the said election; at other times they are to remain in vigor" (AAS38 [1946], p. 76. Note: Fr. Brian Harrison elaborates further upon the meaning of these words,here.)

Therefore, we cannot conclude the Pope Francis has been invalidly elected based upon this information alone. However, we can ask if Cardinal Danneels and Cardinal Kasper have been automatically excommunicated. If they have been, and it would appear so from John Paul II, why is Pope Francis allow them to participate in the Synod on the Family? I think we all know the answer.

Addendum: The biographers of Cardinal Danneels are now retracting their comments on the St. Gallen Group according to Edward Petin. I am not suprised.http://www.ncregister.com/blog/edward-pentin/st.-gallen-group-not-a-lobby-group-say-authors/

[Comment Guidelines - Click to view]
The Remnant values the comments and input of our visitors. It’s no secret, however, that trolls exist, and trolls can do a lot of damage to a brand. Therefore, our comments are heavily monitored 24/7 by Remnant moderators around the country.  They have been instructed to remove demeaning, hostile, needlessly combative, racist, Christophobic comments, and streams not related to the storyline. Multiple comments from one person under a story are also discouraged. Capitalized sentences or comments will be removed (Internet shouting).
The Remnant comments sections are not designed for frequent personal blogging, on-going debates or theological or other disputes between commenters. Please understand that we pay our writers to defend The Remnant’s editorial positions. We thus acknowledge no moral obligation whatsoever to allow anyone and everyone to try to undermine our editorial policy and create a general nuisance on our website.  Therefore, Remnant moderators reserve the right to edit or remove comments, and comments do not necessarily represent the views of The Remnant.
back to top
Last modified on Saturday, September 26, 2015
Tweet

More in this category: « Episcopal Mental Abuse and Papal Parental Neglect: How to Make a Neurotic Church The Changing Face of "Schism" in the Catholic Church »