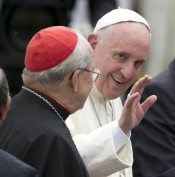 In examining the appalling list of heretics and vicious, persecuting enemies of Christ specially invited by the pope to participate in the Synod next month, I am slowly coming to understand that the Church is suffering a kind of corporate neurosis, brought about by the same thing that creates neurotic behaviour in individuals; decades of mental and spiritual abuse. How did this situation come about, in which millions of Catholics, faced with a catastrophic pontificate of a modernist pope clearly bent on grinding down the surviving structures of Catholicism, continue to cling so desperately to their determination that the pope is always right? How do we still have, even now with the head of the Congregation for the Doctrine of the Faith warning of an impending schism, the “papal positivists” continuing to whistle in the dark? Could it be a kind of Stockholm Syndrome that we see manifested by abuse victims?

When I was a teenager, my parents moved us to the Canadian arctic and spent a few winters raising and training sled dogs. This activity taught me one cardinal rule with training a dog: consistency. You will do no more than confuse a dog when you discipline him for unwanted behaviour one day and let it slide the next. My stepfather used to say that there is no such thing as a vicious breed or a naturally vicious dog. A dog is made vicious by mistreatment.


I’m not a parent, but I’ve observed that a similar rule applies to raising children. When a young human is disciplined in an inconsistent and apparently random or disproportionate manner, or when one sibling is disciplined for behaviour allowed to another, what they learn is not obedience and orderly behaviour, but that there really are no rules, no system to trust and it’s every kid for himself.

Psychologists have agreed that such chaotic, unpredictable and unjust behaviour from the grown-ups in charge produces an unhappy, angry, fearful and ungovernable personality. The child loses faith in the rightness of things and comes to believe that the world is a dangerous, untrustworthy place. Children raised this way will learn to become obsessive, fearful observers and develop calculating patterns of behaviour meant to create order out of their chaotic environment. This is the development pattern that psychologists say produces intractable neuroses and personality disorders when the children grow up and enter the wider world never having learned the normal rules of life.

It seems that this rule applies very well to the Church. It was seen during the “conservative” Long Interval of John Paul II that the disciplinary hand of Rome would come down apparently randomly, often only to retreat again after credible threats that never materialized into reality and perpetrators were almost never removed. Ordinary Catholics were commonly left at first perplexed and frustrated then frequently angry and cynical, embittered against the Church. Thousands, possibly millions of them left the practice of Catholicism entirely.

And this pattern continues today, perhaps more obviously than ever before, not only in the bizarre, chaotic and damaging pontificate of Pope Francis but now as it is being carried on with his encouragement by his chosen subordinates running the Synod of Bishops. In reading of the outrageous behaviour of Cardinal Baldisseri and his staff at the Synod secretariat in Edward Pentin’s book, “The Rigging of a Vatican Synod,” one cannot help but be reminded of schoolyard bullies, enabled and emboldened by a neglectful or even complicit school administration. Or worse, what comes to mind is a massively, brutally dysfunctional family in which the father cares nothing for the children being abused by older siblings and uncles. In which, ultimately, the father is understood by everyone to be responsible for the abuse, but everyone is terrified to admit it.

As every still-believing Catholic knows, whether Traditionalist or not, the abuse of the faithful began immediately after the close of the Council. The destruction of the liturgy and the frenzy of iconoclasm happened in some places in a shocking matter of weeks. After that, until the end of the reign of Paul VI and through the Long Interval of John Paul II and Benedict XVI, Catholics slowly learned not to trust the inconsistent, random and haphazard responses from Rome.

After years of outrages against the Faith, one egregiously modernist bishop would be threatened with disciplinary measures, that would then fail to materialize – as in the case of Raymond Hunthausen of Seattle – while another famous offender in the neighbouring diocese – a Remi de Roo in Victoria, a Roger Mahoney in Los Angeles or a Rembert Weakland in Milwaukee –  would be left entirely alone for decades, cheerfully grinding down to nothing the life of the Faith in his own see, leaving a trail of human wreckage behind them.

Liturgical abuses would be corrected ad hoc here and there, only eventually to be officially approved, as in the notorious cases of Communion in the hand and altar girls. One religious order engaged in wacky leftist or pro-abortion political lobbying or wild neo-pagan paraliturgies would receive a smack on the nose from the Vatican’s rolled-up newspaper, while the one next door, doing exactly the same, or worse, would carry on uninterrupted.

Weary years became weary decades in which every institution in the Church crumbled into dereliction under the “great” John Paul II, while letters to either local bishops or Rome elicited either more abuse or silence. And all through this, while uncounted millions simply gave up their faith, the phenomenon grew of the remaining believers, the abuse survivors, desperately insisting that the problem lay at the diocesan level, that “the Vatican” and the pope remained bastions, havens of orthodoxy. Precisely the reaction of abused children or spouses defending the one responsible for the abuse.

Don't miss Hilary's sobering article on Feminism's infiltration of the pro-life movement in the latest print- and e-edition of The Remnant.  Still not a subscriber? Today's the day!


This habit of looking to Rome was eventually to grow into the phenomenon of “papal positivism” we see manifest today. But for 26 years there was effectively no functioning central authority in the Church, and what discipline was available came at random from individual members of the Curia, like Joseph Ratzinger. John Paul II, while he may have written much, exhorted frequently and spoken eloquently in defence of the Church’s teaching on the sanctity of life and the family, was silent on or even opposed in his actions crucial teaching on ecclesiology and liturgy. And in the end even his exhortations proved effectively meaningless out of his complete lack of willingness to enforce them.

Thus, out of this parental neglect was born the current schizophrenic situation where the Church’s teachings remain written in the books and mouthed in public by prelates while being ignored and undermined by them in pratice. And of course it is this very schizophrenia that Walter Cardinal Kasper, a man whose outrageous and very public heresies have gone uncorrected for 40 years, wants, perhaps not unreasonably, finally to make official Catholic “policy”.

The other day, someone asked me why I have such an animus towards “St. John Paul the Great,” and I responded that I am tired of the desperate Catholic faithful lionizing the man whose appalling neglect of his duty was what allowed the Church to wither into its current condition. John Paul II may legitimately lay claim to having helped to bring about the end of the Soviet Union, but many are now looking on the wasteland that is the contemporary Catholic Church and saying openly that he manifestly failed to do the job he was elected to do. Under his watch, characters who understood well how to play the game – wicked men who bullied and corrupted the faithful by the millions – took advantage of the chaotic, lawless environment that grew under a mainly absent father.

This chronic inconsistency in the application of Church discipline –  including the “new normal” of bishops disciplining faithful Catholics for being faithful – has finally reached a nadir in the pontificate of Pope Francis who governs over a Church already traumatized, untrusting and half-paralysed with desperate, neurotic fears and confusion. But with Francis we see an entirely new kind of phenomenon, the next stage in the progression of the Catholic disaster.

Whatever his failings as pope, there was no doubt that Pope John Paul II was at least a believer. We knew him. We knew his history, his preferences, his interests and his background. He was open about what he believed, what his positions were, what his priorities were. He was indeed a master showman, and his habit of engendering adulation from the crowds may have been harshly criticised, but even his critics would never have accused him of lying or misrepresenting himself.

But Francis – while using ambiguous and platitudinous speeches to remain personally obscure – seems to have brought the abuse out into the open and to a whole new level, allowing his subordinates an unrestricted hand and playing coy about his support for their activities. Almost from the first week of the new pontificate, the Catholic world, what’s left of it, watched, aghast, at the bizarre and horrifying punishment of the Franciscan Friars of the Immaculate.

However much his desperate apologists may try to explain away his brazen demagoguery and his bizarre and occasionally openly heretical utterances, it is clear that Francis himself is a man to be feared. Indeed, his reputation from Argentina as a master political operator with a brutish, vindictive streak and a history of lashing out at his opponents, is slowly starting to seep into the awareness of the English language Catholic media, at least at the level of the ‘blogs.

But among priests and religious the lesson of the FFI has certainly been learned: a religious order that flourished and blossomed and produced prodigious holy fruit precisely because of its determined faithfulness to the Church’s doctrine and discipline, flogged and beaten to death in the virtual town square and its carcass hung on the walls as a warning to any who might have similar ideas.

After that, what more proof do we need that we are in the grip of a vicious, persecuting tyranny of oligarchs? The Catholic world, Christ’s Immaculate Bride, governed by the iron fist of a post-modern, post-Christian Thirty Tyrants.

[Comment Guidelines - Click to view]
The Remnant values the comments and input of our visitors. It’s no secret, however, that trolls exist, and trolls can do a lot of damage to a brand. Therefore, our comments are heavily monitored 24/7 by Remnant moderators around the country.  They have been instructed to remove demeaning, hostile, needlessly combative, racist, Christophobic comments, and streams not related to the storyline. Multiple comments from one person under a story are also discouraged. Capitalized sentences or comments will be removed (Internet shouting).
The Remnant comments sections are not designed for frequent personal blogging, on-going debates or theological or other disputes between commenters. Please understand that we pay our writers to defend The Remnant’s editorial positions. We thus acknowledge no moral obligation whatsoever to allow anyone and everyone to try to undermine our editorial policy and create a general nuisance on our website.  Therefore, Remnant moderators reserve the right to edit or remove comments, and comments do not necessarily represent the views of The Remnant.
back to top
Last modified on Wednesday, September 23, 2015
Tweet

More in this category: « The Sheer Stupidity of the Church of Vatican II St. Gallen’s “Mafia”: Answering Those Who Are Questioning the Validity of the Election of Pope Francis »