The "Vegetable Gospel": Saving Souls vs. the Planet 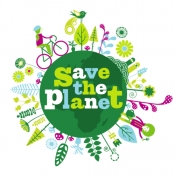 These days it is not uncommon for a Catholic to hear about the need to care for the flowers, the trees, the birds and other aspects of God’s creation. Yet, those who promote this message in the church often fail to mention the need to convert the countless souls who are in need of salvation. Many wax eloquently about the need to take care of brother tree, sister flower and mother bird, but very seldom about the need for souls to repent of sin and receive salvation. Why? Simply put, many no longer believe there is anything from which people need to be saved.

Does man really need salvation? According to Sacred Scripture, all people are born in sin (Psalm 51:5) and this doctrine is known of “original sin”. Additionally, all are under God’s wrath (Ephesians 2:3) because of their sins. Scripture even says that man is under the domain of Satan (Ephesians 2:2).

As bad as this already may sound, Scripture doesn’t stop there; it further states that man, after the fall, is dead in sin (Ephesians 2:1) and alienated from God (Colossians 1:21). If one is to take the Christian faith seriously, then one must clearly affirm that man is in desperate need of salvation, as the Catechism of the Catholic Church says:

The doctrine of original sin is, so to speak, the "reverse side" of the Good News that Jesus is the Savior of all men, that all need salvation and that salvation is offered to all through Christ. (389)

At this point, it may be necessary to ask: from what exactly does one need to be saved? Simply put, eternal separation from God, i.e. hell. The Catholic faith teaches that if one dies alienated from God, then they descend immediately into hell, as the Ecumenical Council of Florence says:

But the souls of those who depart this life in actual mortal sin, or in original sin alone, go down straightaway to hell to be punished, but with unequal pains. (Florence, Sixth Session, 6 July 1439.)

Scripture itself is filled with warnings about dying alienated from God, saying:

Anyone whose name was not found written in the book of life was thrown into the lake of fire. (Revelation 20:15)

It is a fearful thing to fall into the hands of the living God.

Consequently, there is clearly a need to proclaim the Gospel of Christ, as it is the only means by which one may be saved from God’s wrath (John 14:6).

Which is More Important?

Having briefly considered the vast difference between the plight of creation and the plight of man, one must ask: which is more important, the salvation of souls, or care for creation? Jesus answers this question for us, as He said:

Look at the birds of the air; they do not sow or reap or store away in barns, and yet your heavenly Father feeds them. Are you not much more valuable than they? (Matthew 6:26).

It is contrary to human dignity to cause animals to suffer or die needlessly. It is likewise unworthy to spend money on them that should as a priority go to the relief of human misery. One can love animals; one should not direct to them the affection due only to persons. (2418)

All of this is not to say that man should not be a good steward of the creation with which God has entrusted him. Clearly, he should, but there are weightier matters with which man should be more concerned. Given how desperately man is in need of salvation, and the fact that few ever find it (Matthew 7:14), maybe it is time to stop neglecting the “weightier matters of the law” (Matthew 23:23) and start addressing what will truly matter in the end, i.e. the salvation of souls.

[Comment Guidelines - Click to view]
The Remnant values the comments and input of our visitors. It’s no secret, however, that trolls exist, and trolls can do a lot of damage to a brand. Therefore, our comments are heavily monitored 24/7 by Remnant moderators around the country.  They have been instructed to remove demeaning, hostile, needlessly combative, racist, Christophobic comments, and streams not related to the storyline. Multiple comments from one person under a story are also discouraged. Capitalized sentences or comments will be removed (Internet shouting).
The Remnant comments sections are not designed for frequent personal blogging, on-going debates or theological or other disputes between commenters. Please understand that we pay our writers to defend The Remnant’s editorial positions. We thus acknowledge no moral obligation whatsoever to allow anyone and everyone to try to undermine our editorial policy and create a general nuisance on our website.  Therefore, Remnant moderators reserve the right to edit or remove comments, and comments do not necessarily represent the views of The Remnant.
back to top
Tweet
More in this category: « Rigged Synod: Edward Pentin Chronicles the Last Stages of Revolution Voris Jumps Shark, Hunts SSPX White Whale As Church Braces for Apostasy »